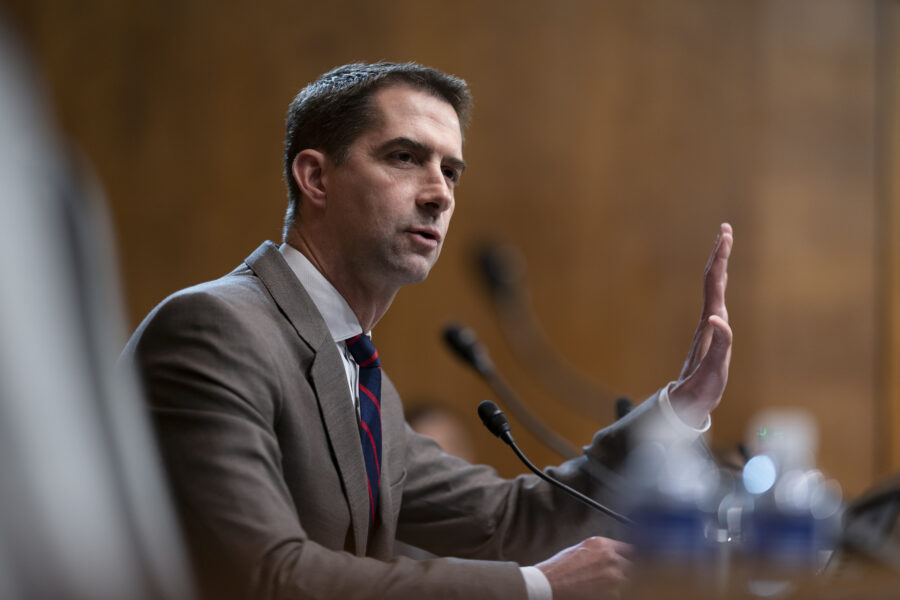 Tom Cotton says he will slow down confirmation of all of President Joe Biden’s nominees until Congress is allowed to review the classified documents found at the residences of Biden and former President Donald Trump.

The Arkansas Republican senator emerged Wednesday from a classified briefing with Biden officials, including Director of National Intelligence Avril Haines, and accused the administration of “stonewalling” Congress. In response, Cotton said senators will “impose pain on the administration until they provide these documents. And that is coming from both parties.”

“I’m prepared to refuse consent or to fast-track any nominee for any department or agency. And take every step I can on every committee on which I serve to impose consequences on the administration until they provide these documents for the Congress to make our own informed judgment about the risk to national security,” Cotton said.

Cotton’s stance threatens to shut down an already slow-moving Senate. The chamber has taken just one roll-call vote since being sworn in on Jan. 3: confirming an assistant defense secretary on Monday. The chamber will take its second floor vote on Thursday to dub January National Stalking Awareness Month.

Otherwise, the chamber has been in a deep freeze, with no votes on Tuesday or Wednesday and continued haggling over committee assignments. If Cotton follows through on his objection, it will mean Senate Majority Leader Chuck Schumer has to burn multiple days of valuable floor time to set up nominee votes.

Classified documents have recently been found at the homes of both Biden and former Vice President Mike Pence and promptly turned over to the National Archives. Additionally, Trump’s residence at Mar-a-Lago was searched by the FBI last summer after he refused the Archives’ attempts to recover troves of classified records. Cotton said the administration would need to provide Congress with all the material seized from Biden, Trump and Pence to satisfy the Arkansas senator.

“Congress has an absolute right to every single document or item or photo or box or picture or map that was at President Trump’s residence, President Biden’s residence and office, and for that matter, President Pence’s residence as well,” Cotton said. “I still have no clue what was in these documents. I’m not aware of any member of Congress that has any clue.”

With agreement from all 100 senators, nominees can move immediately, although many nominees must go through a more laborious process. Nominees can be confirmed with simple majority votes, though any senator can still filibuster a nominee to delay their confirmation.

“I’m sorry to see him try to find a way to obstruct the Senate. I’m hoping we can find a bipartisan way to get this done,” said Senate Majority Whip Dick Durbin (D-Ill.). “The special counsel is investigating.”

The special counsel probes into Biden’s and Trump’s handling of classified documents could complicate congressional oversight efforts. Administrations have historically been reluctant to share information with Congress that’s relevant to ongoing investigations, an issue that flared up during the probe into Russian interference in the 2016 election.

But senators noted that a precedent was established during the Russia investigation permitting lawmakers to receive preliminary briefings and the administration found ways to resolve inter-branch conflicts.

Cotton has used this strategy in the past, holding up U.S. attorney nominees during the last Congress in protest against the Justice Department’s treatment of marshals who defended a courthouse in Portland, Ore., during Black Lives Matter demonstrations. But he also isn’t the only senator frustrated about the lack of detail provided by the intelligence chief.

Sen. Marco Rubio (R-Fla.) called the briefing “very unsatisfying … to say that they’re not going to share anything with us as long as the special counsel doesn’t allow them to share it with us? That’s an untenable position.”

Cotton also alluded to Democratic unease over the administration’s stance. And Senate Intelligence Chair Mark Warner (D-Va.) said that “the answers we received on that issue didn’t meet the mark, and I’ll have more to say later.”

“I’m very disappointed with the lack of detail and a timeline on when we’re going to get a briefing,” Warner added. “We’re left in limbo until, somehow, a special counsel designates it’s OK for us to be briefed. And that’s not going to stand, and all things will be on the table to try to make sure that doesn’t happen.”