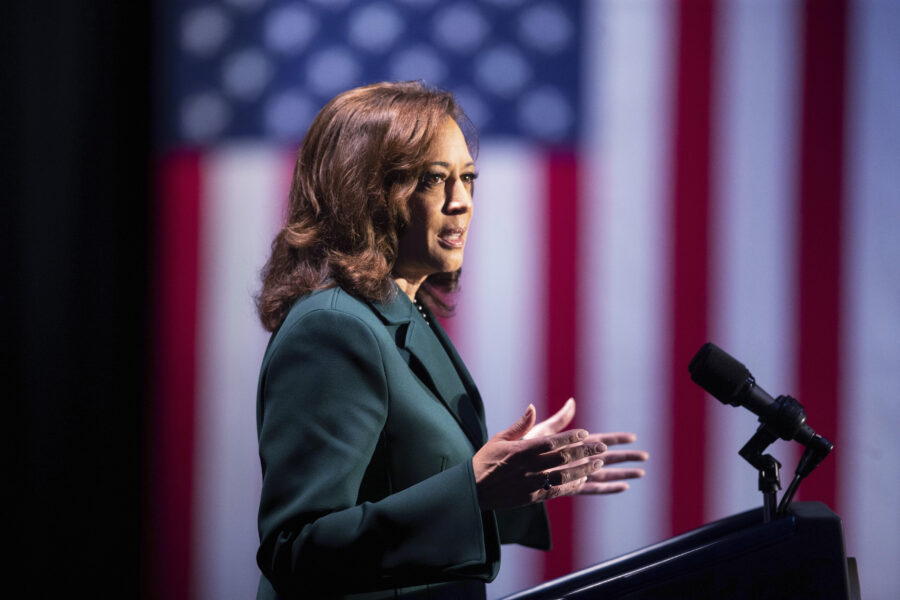 TALLAHASSEE, Fla. — Vice President Kamala Harris on Sunday brought the battle over abortion directly to the doorstep of potential 2024 president contender Gov. Ron DeSantis ahead of what could become another contentious fight over abortion in the weeks ahead in Florida.

Harris gave a midday speech in Tallahassee highlighting the 50th anniversary of Roe v. Wade, where she not only weaved in several mentions of “freedom” — a subtle dig at DeSantis’ recurring remarks about the “free state of Florida” — but said “extremists” in the statehouse had passed a “radical abortion ban” last year.

“And can we truly be free if so-called leaders claim to be ‘on the vanguard of freedom’ while they dare to restrict the rights of the American people and attack the very foundations of freedom,” Harris said.

The Biden administration has clashed repeatedly with DeSantis over the last two years, but Harris’ appearance just a mile from the state Capitol seemed to signal a higher level of engagement with the governor, who is viewed as the top challenger to former President Donald Trump for the Republican nomination.

Before Harris took the stage at the Moon nightclub in Tallahassee, attendees in the audience chanted “Hey ho, DeSantis has to go.”

Harris, in her remarks, criticized the DeSantis administration after Florida health regulators told health care providers they could risk criminal charges if they distributed abortion pills. That warning — which went to pharmacies — was distributed after the FDA dropped long-standing restrictions that banned the abortion pill from being sold at retail pharmacies.

President Joe Biden sent out a memo on Sunday calling on federal agencies to look at barriers of patients accessing abortion pills, setting up the possibility that the administration could take action sometime in the future.

The DeSantis administration did not respond to questions about Harris’s comments. The Republican Party of Florida put out a statement that stated “Democrats are proudly cheerleading barbaric policies to allow unrestricted abortions — including infanticide. That’s all anyone needs to know.”

Democrats were able in many states to galvanize voters in the midterms over abortion, but DeSantis crushed his Democratic opponent, Charlie Crist, in November by nearly 20 points. Crist spent weeks highlighting abortion restrictions in the run-up to the November elections.

Florida’s Legislature last year passed a controversial ban on abortion after 15 weeks without exceptions for rape and incest. A legal challenge to it is being considered by the state Supreme Court. DeSantis supported the ban and has said he backs abortion restrictions beyond the current law, although he has stopped short of specifics.

Harris zeroed in on the laws passed in Florida and other states as “designed by extremists.” She called the Florida law a “a radical abortion ban with no exceptions, even for the survivors of crimes like rape and child molestation and human trafficking.”

But it’s not clear what GOP legislators plan to do. Florida House Speaker Paul Renner late last week was non-committal about what lawmakers would do next, saying that while there is a “pro-life majority” in the House that “we have not finalized anything in that regard.” Renner said some members were supportive of the current restrictions, while others wanted to restrict access further. Florida Senate President Kathleen Passidomo (R-Naples) previously said she supports restricting abortions after 12 weeks of pregnancy but with exceptions for victims of rape and incest.

“DeSantis is running for president in 2024,” said Driskell shortly after Harris spoke. “He controls everything in that building.”

Harris’ speech was given inside a nightclub located a mile from the Florida Capitol due to the threat of rain and bad weather. Nikki Fried, Florida’s former agriculture commissioner who attended the event, said that both Florida State University — and Florida A&M University, a historically Black college and university — turned down requests to have Harris appear on campus.

Fried she had been working with Planned Parenthood on an event noting the anniversary of Roe v. Wade and was asked to help with logistics once the White House confirmed that Harris was coming to town.

Fried suggested that the schools turned down Harris because the institutions feared angering DeSantis, but Dennis Schnittker, assistant vice president of communications for Florida State University, said the university “was unable to accommodate the Vice President due to previously scheduled events and operations.”