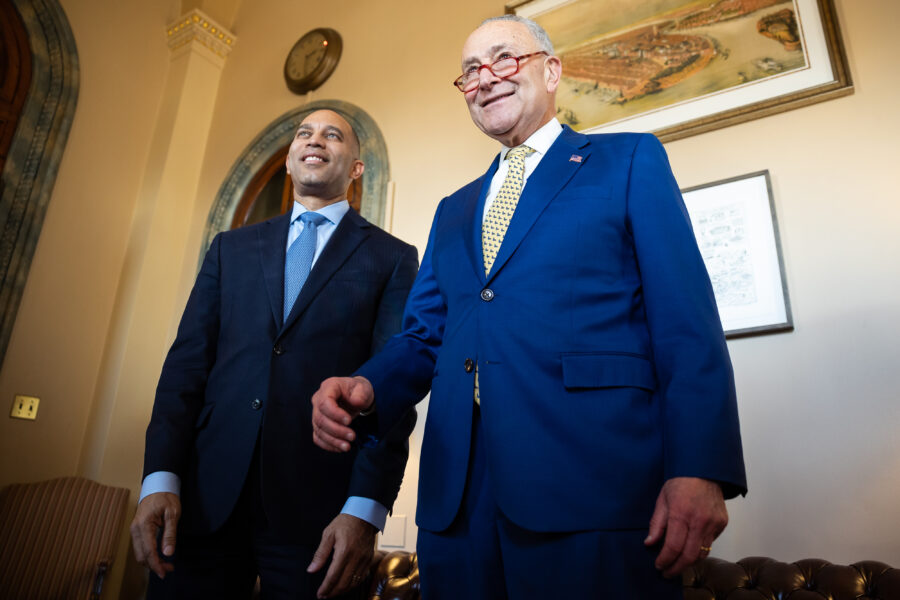 ALBANY, N.Y. — After bruising Democratic congressional defeats in New York last November, the state came away with an unusual prize: It can stake claim to two of the four top leaders in Congress — a first for the state.

Senate Majority Leader Chuck Schumer and House Democratic Leader Hakeem Jeffries plan to use their dual roles to apply the lessons learned from their party losing three House seats in New York, an outcome that helped propel the GOP to the majority. They hope their roles can help refine their party’s message in 2024 while bolstering the needs of their state, including new affordable housing initiatives and long-stalled infrastructure projects.

The two Brooklynites won’t enjoy the same power, with Jeffries in the minority. But after House Republicans were in unprecedented turmoil, only agreeing to elect a speaker after significant concessions, Jeffries will be a large player in the closely divided chamber.

Schumer had former Speaker Nancy Pelosi on speed dial, talking with her several times a day on his famous mobile flip phone. He expects a similar relationship with Jeffries, who, like Schumer, started his career in the state Assembly in Albany.

“I think I’ll have the same close relationship with Hakeem, and we’ll both want to help New York,” Schumer said in an interview last month at the Capitol after orchestrating Democrats’ return to the Senate majority this year. “They are in the minority, so it’s harder, but the minority can still get a lot done.”

Jeffries said the Democratic defeats in New York this year will help guide his party’s strategies heading into 2024 as he hopes to regain the majority and become the House’s first Black speaker.

Republicans seized on a message of law and order and the economy to sweep all four House seats on Long Island and three out of four in the Hudson Valley — embarrassing losses for Democrats in the heavily blue state.

“My view is the state Democratic Party should complete the after-action analysis, that I understand to be underway, and ascertain what happened in this most recent midterm elections — what was done right, what was done wrong and how do we maximize performance so we can be successful in 2024,” Jeffries said in a telephone interview in December as he prepared for the next Congress. 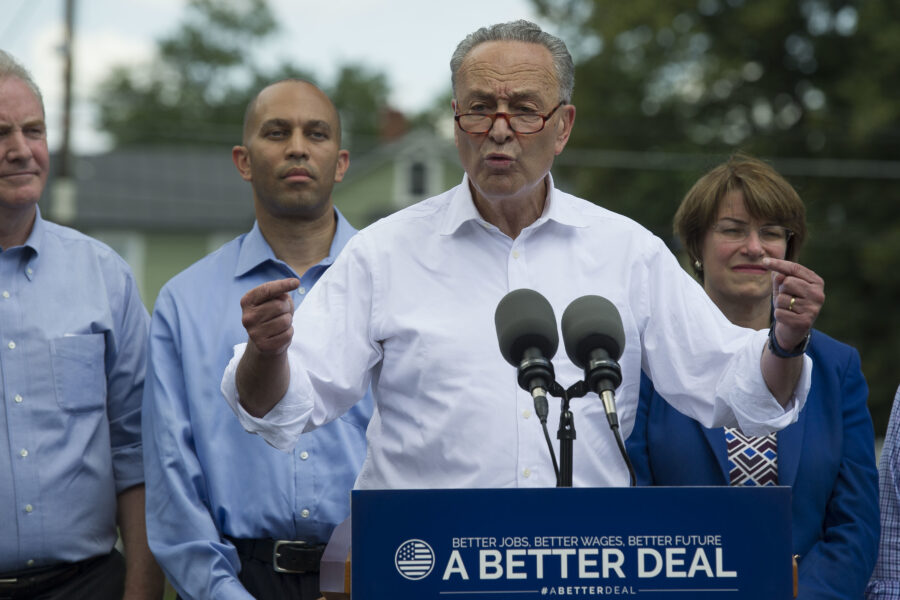 They have a lengthy list of goals to help their native New York.

Jeffries, 52, who views Schumer, 72, as a mentor, said he wants to work with state leaders on their shared goal of affordable housing for New York City and tackling crime problems that Republicans seized on during last year’s election.

“It used be to that gentrification and housing displacement was solely limited to a few cities, including New York, San Francisco and Boston. But unfortunately, over the last several years, we’ve seen that housing crisis morph into a nationwide phenomenon,” Jeffries said. “That will provide a window of opportunity for the House and the Senate to work together to decisively deal with the affordable housing crisis that will not only benefit all New Yorkers, but people throughout the nation.”

Schumer, the first Senate majority leader from New York, points to the results that his leadership has brought home to New York. He spent nearly two years trying to lure Micron Inc. to Syracuse, a deal announced last October that relies heavily on incentives from the federal CHIPS and Science Act passed by Congress in August that he helped craft.

Now Schumer is lobbying to make Western New York one of the 20 regions in the nation to be designated as tech hubs funded with $10 billion in the CHIPS Act; bring the country’s first National Semiconductor Technology Center to Albany and make Binghamton University a leader in renewable battery research.

Another win Schumer touts: New York has long provided more tax revenue to Washington than it gets back. That ended when the state benefited from massive federal spending programs during the Covid-19 pandemic, which hit New York the hardest before any other state. 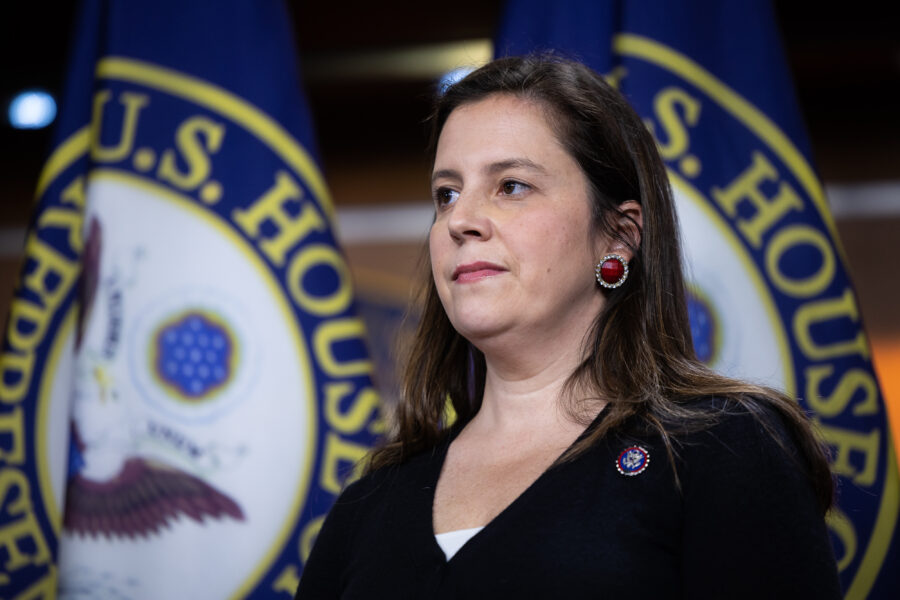 Schumer said the Infrastructure Investment and Jobs Act last year will have plenty of money for New York to complete much of its long-stalled transportation projects, including an $8 billion boost to build the $16 billion Gateway rail tunnel project between New York City and New Jersey. The act also includes money to study and design an expansion of the 2nd Avenue subway line in Manhattan.

“We don’t need to depend on new appropriations for that. Gateway, the same thing,” Schumer said. “There is more than enough money to fund Gateway.”

Schumer said he expects Jeffries will get help for New York priorities from House Republicans as they seek to score victories in Washington to keep or expand their 11-member GOP delegation — the largest in decades among the state’s 26 seats and one of the biggest GOP delegations in Congress. Schumer hopes, for example, they can find common ground on the upstate high-tech projects on his short list.

New York could also benefit from having a powerful member in the GOP majority. Rep. Elise Stefanik, the North Country congresswoman with close ties to former President Donald Trump, the third-ranking House Republican.

She’ll be the most powerful Republican in New York since the GOP holds no statewide offices.

“I am proud that New York Republicans will be serving as one of the largest state delegations in our new Republican Majority, and I was able to help lead our efforts to make that a reality,” she said in a statement.

Stefanik wants to use her position to tackle New York issues that she’s long targeted. For example, she wants House Republicans to look into whether the FBI was complicit in its lack ofoversight that led to a deadly 2018 limo crash and further investigate former Gov. Andrew Cuomo’s pandemic order that she says fueled 15,000 deaths tied to nursing homes.

“Our Commitment to America focused on an economy that’s strong, a nation that’s safe, a future built on freedom, and a government that’s accountable will help every New Yorker,” she said.