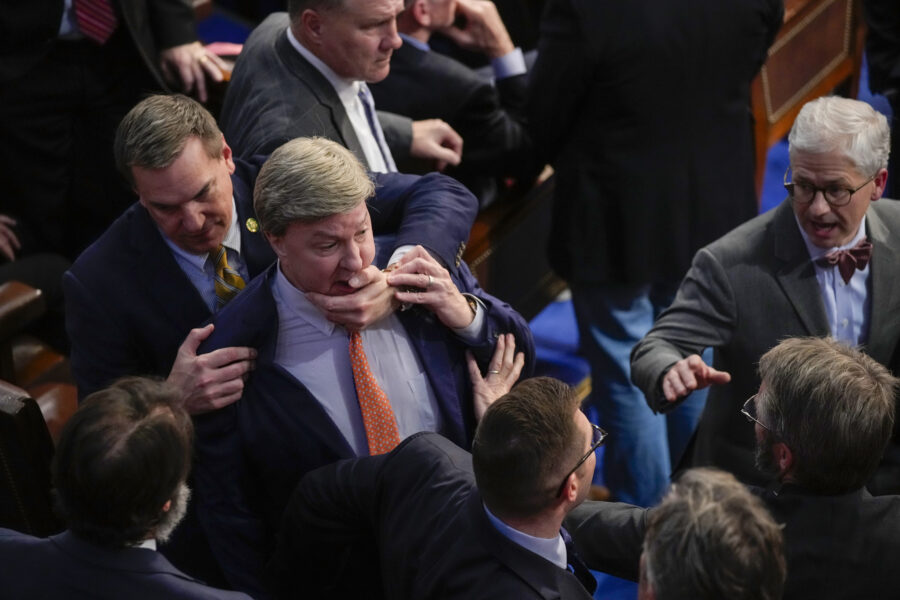 Even for career-long observers of Congress, Friday night on the House floor was a sight to behold.

The chamber descended into chaos when two lawmakers nearly came to fisticuffs — the frustration of four long days of failing to elect a speaker boiling over. And that was just part of the drama.

Rep. Mike Rogers (R-Ala.) lunged at Rep. Matt Gaetz (R-Fla.) and had to be pulled away by Rep. Richard Hudson (R-N.C.). It happened after Gaetz blocked Kevin McCarthy from clinching the final vote to be elected speaker in the fourteenth round of voting — and after the rabble rouser signaled he was ready to back down and let everyone finally go home.

Across the chamber, Democratic Reps. Dan Kildee (D-Mich.) and Pete Aguilar (D-Calif.) could be heard shouting “Be civil!”, according to a member who heard the exchange.

Several GOP members said they believed the animosity between Rogers and Gaetz reached a boiling point over talk that GOP leadership might offer Gaetz the chairmanship of a House Armed Services subcommittee. Rogers, who is set to lead that panel, had grownincreasingly angry at the holdouts during the week, and he had initially threatened to try to strip anti-McCarthy members of committee assignments.

It didn’t help that Gaetz told Rep. Illhan Omar (D-Minn.) on the House floor the day before that the holdouts had gotten everything they wanted from leadership, but were still voting against McCarthy, according to a person familiar with the conversation.

Gaetz appeared to revel in the drama. He left the chamber and headed to the restroom right before his name was first called during the roll call. That meant when he returned, he would cast one of the final votes — and McCarthy’s fate would come down to him.

Rogers declined to comment when asked about the altercation, but Hudson later told reporters, in an understatement: “It was a very tense moment, and I was just trying to play a role to keep the tensions down.”

“Through all of this, people’s emotions go up and down,” McCarthy later told reporters. “But at the end of the night, Matt got everybody there … it actually helped unite people.”

Standing up a little while later to give a nominating speech for Democratic Leader Hakeem Jeffries (D-N.Y.), Rep. Dean Philips (D-Minn.) summed up the spectacle everyone had just witnessed: “Madam clerk, I rise to say, ‘Wow.’”

Some Democrats noted the presence of children on the House floor and watching the House’s imitation of the British Parliament from the gallery.

Others looked on with dismay.

“Nothing like a little more chaos to go with the chaos,” said Rep. Steve Womack (R-Ark.), before solemnly adding: “Tempers are short, particularly when it’s late at night. You’ve been here a long time and you think you’ve got a deal done.”

The member-on-member scuffle wasn’t the only “wow” moment. Some others as the speaker race drew to a close:

An hour later, during his first speech as speaker, McCarthy seemed to acknowledge the pandemonium that had overtaken his workplace the past week.

Kyle Cheney contributed to this report