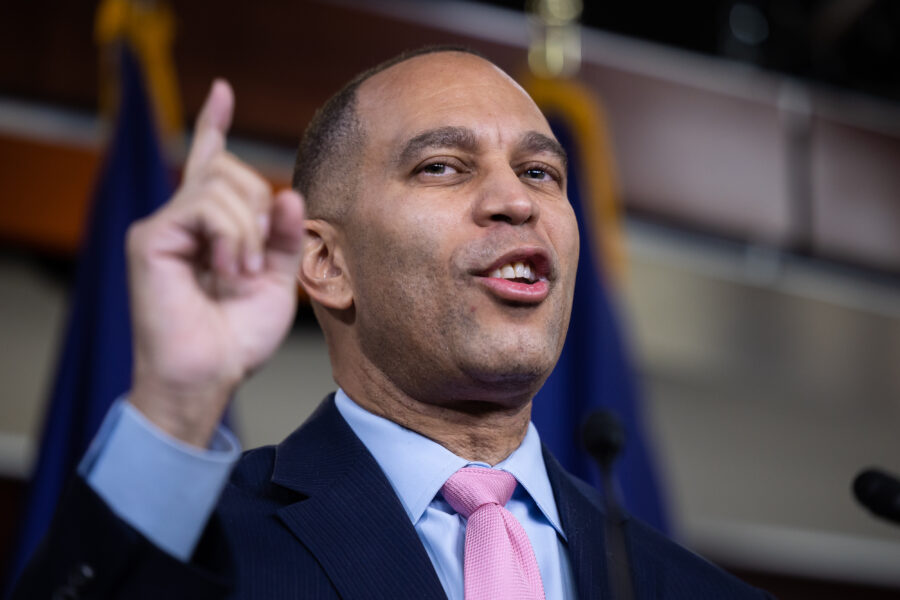 It’s the third day of a leaderless House, and Democrats are in no mood to bail Republicans out.

“They’re not desperate enough yet,” said Rep. Elissa Slotkin (D-Mich.), who is precisely the type of moderate Democrat who would be involved in compromise conversations with the GOP.

Eventually, she said she may be open to reaching a deal on a “consensus” candidate, such as when issues such as staff pay or inability to act on national security matters hit a breaking point. But until then: “We’re going to need to sit here and stay united while they figure out who they want to be.”

The incoming minority party has stayed totally united behind its leader, Rep. Hakeem Jeffries (D-N.Y.), through over half a dozen rounds of balloting. It’s so unified, in fact, that the pair of Democrats who missed a Wednesday procedural vote due to off-Hill political meetings apologized to the rest of the caucus during a closed-door meeting Thursday, according to two people familiar with the situation.

A handful of Democrats have begun to engage in preliminary conversations with their GOP counterparts about how to end the standoff, including private chats on the floor, phone calls and even late-night meetings. But lawmakers across the caucus agree: It’s far too early for any real talk of a power-sharing agreement to spare the Republicans further embarrassment.

Even as some Republicans continue to float — and perhaps threaten — cooperation across the aisle as an option, Democratic leaders have unequivocally declined to engage, even with hypotheticals. They’ve repeatedly pointed to Jeffries’ larger vote total than Republican Leader Kevin McCarthy, and Jeffries noted Thursday it was “time for Republicans to get their act together.”

And at the start of the eighth ballot, his deputy, House Minority Whip Katherine Clark (D-Mass.) repeated Jeffries’ vote count of “212” seven times.

Democrats across the board were skeptical that any sort of cross-party power-sharing deal would work — even those that came from state legislatures that were under so-called coalition control, such as Alaska.

Rep. Mary Peltola (D-Alaska), a former state legislator, said she was open to a House with shared power between the parties “if there were a coalition that were workable.”

But she acknowledged: “if you’re putting a coalition together with a field of 40 people, that’s much more manageable than 435. And in Alaska, things don’t seem to be nearly so entrenched. Even the staff here is entrenched. It’s not just the elected members with these very hardline philosophies.”

During a caucus meeting Thursday morning, no members brought up even the possibility of working with the GOP, according to three people attending. Instead, Democrats were still ready to repeatedly oppose Republican attempts to adjourn the House and said they were prepared to stay in town as long as it took to get a speaker.

At one point during the meeting, Jeffries began to repeat the mantra of his predecessor, former Speaker Nancy Pelosi: “Our diversity is our strength, our unity is our power” — only to have the rest of the caucus repeat it in unison.

“This is a fight between them right now, between their right wing and their extreme right wing,” said Rep. Jim McGovern (D-Mass.). “They’ve got to figure this out.”

In fact, the vast majority of House Democrats are eyeing the infighting across the aisle with some schadenfreude.

At the same time, the continued impasse has hampered the ability of lawmakers in both parties to run their offices. Democratic offices received guidance Thursday apologizing for an earlier miscommunication erroneously indicating they wouldn’t be able to handle any new constituent casework with the House in limbo, according to a copy reviewed by POLITICO. The updated guidance blamed the error on Republicans’ “ongoing chaos.”

The longer the speaker fight drags on, the more of an impact it will have on the House’s operations since the chamber can’t do anything until it elects a speaker. If rules aren’t adopted by Jan. 13, for example, committee staff won’t be paid.

“We are, right now, a one-winged bird. We can’t fly, we can’t do anything. And it’s making us vulnerable,” Rep. Emanuel Cleaver (D-Mo.) said, who said he’s worried that U.S. enemies could be plotting how to capitalize on the chaos — particularly with escalating tensions abroad. “If you’re Poland, you’re scared to death.”

As they look to break the standoff, Republicans have viewed moderate Democrats, particularly those from districts that voted for former President Donald Trump, as potential partners to help resolve the speaker imbroglio. But those lawmakers aren’t biting yet.

Rep. Pat Ryan (D-N.Y.), who triumphed in a close reelection fight last year, said of Republicans: “When in charge, take charge, right? We’ve been unified. We’ve made our selection. It’s time for them to lead, follow or get out of the way, as they say.”

Only a handful of Democrats are willing to publicly entertain the idea of a compromise. Rep. Ro Khanna (D-Calif.), has raised the idea of supporting a moderate Republican speaker who could draw Democratic support, like Rep. Brian Fitzpatrick (R-Pa.).

And Rep. Marcy Kaptur (D-Ohio) has floated a “unity caucus” of Democrats who might be able to vote for McCarthy, but added she left the final decision to Republican and Democratic leaders who might hear the idea and “then think about filling in the blanks and what that means.”

Pelosi, who united Democrats despite her own thin margin in the last Congress, said it was up to Republicans to sort out their own problems.