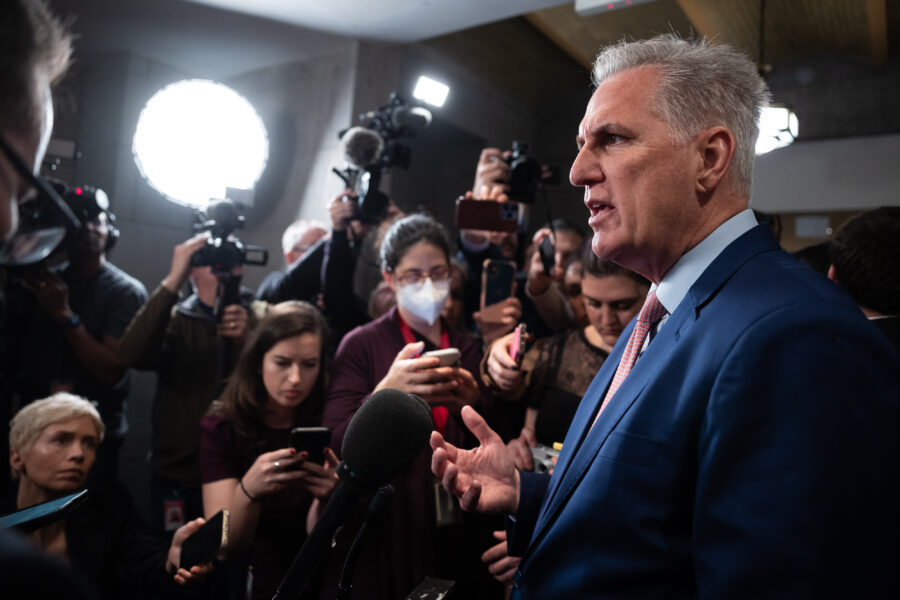 Just two months ago, when Republicans underperformed historical trends in the midterm elections and a bunch of extremist candidates lost winnable races, the consensus view among many commentators was that American politics was at last “returning to normal.”

Okay, then. Tuesday’s drama surrounding the GOP’s efforts to elect a speaker to lead its wafer-thin House majority is normal only in the sense that the past generation has made the politics of chaos, confusion and contempt come to seem normal.

By any historical standard, however, vivid evidence that one chamber of the national legislature is essentially ungovernable is a high-water moment. Kevin McCarthy, whatever the outcome of this contest in coming hours or days, can rest assured he has earned a legacy — as a symbol of pathos and ineffectuality, an emblem of the cannibalistic spirit of the age.

That age, McCarthy’s travails make clear, is not defined exclusively by former President Donald Trump. Recall that the first time McCarthy vied for the speakership — eight years ago, before dropping out in the face of right-wing opposition — occurred before Trump entered the presidential race and made himself the most important figure in the Republican Party. This time around, McCarthy is stumbling even as he holds Trump’s endorsement.

That the McCarthy backlash both predates and postdates Trump’s presidency is a reminder that Trump was someone who exploited the politics of contempt but was not the cause of it, and suggests that he may be only glancingly relevant to some questions facing the future of the conservative movement.

McCarthy and his allies had signaled before the voting began that he was prepared to insist on vote after vote, for days if necessary, to grind down opposition and win vindication for his desperate plea, in a Monday closed-door meeting, that, “I’ve earned this job.” By early Tuesday evening, after McCarthy lost a third vote, that strategy was looking increasingly problematic. The Californian was effectively asking that his own party match him in tolerance for televised public humiliation. Still, no viable alternative to such self-abasement had emerged.

One must squint through the smoke of recent years to recall a time when the conservative movement was shaped by instinctual deference to authority — to establishment priorities and establishment values. When it came to selecting leaders, according to the old saying, Democrats needed to fall in love, while Republicans were content to fall in line.

By the third vote, 202 Republicans were willing to do that, including members who have privately questioned his leadership in biting terms. But 20 were not, and decisively so. That minority faction was acting with justifiable confidence that they were being faithful to the organizing principle of contemporary conservatism: Contempt for any figure who doesn’t also share an attitude of contempt or express it with sufficient purity.

McCarthy, of course, had done his level best. He had spent years raising money for his party. He had muzzled his faint and momentary impulse to stand up to Donald Trump after the Jan. 6 riot. He turned on his one-time ally Liz Cheney to chase her out of the party. Cheney’s experience showed that taking a stand comes at a political cost. McCarthy’s experience may soon show that refusing to take a stand does, too.

McCarthy had given so many concessions to his party’s Freedom Caucus as to guarantee that the speakership is one-step above a symbolic post, with little ability to set an agenda or exert leverage on anyone to promote it.

Surely, he had imagined, all these gestures of propitiation would be enough. But the evidence so far is that they simply reinforced the image held by opponents — and seemingly by some supporters — that he is a politician without genuine convictions, with little ability to instill fear or respect.

Congressional leadership requires carrots or sticks. For the holdouts, McCarthy had neither things they want nor things they fear. Who does have those things? In a revealing sign of the times, Rep. Guy Reschenthaler, who wants to be part of McCarthy’s leadership team as chief deputy whip, said the answer may be right-wing commentators: “We’ll see what happens when Tucker [Carlson] and Sean Hannity and Ben Shapiro start beating up on those guys. Maybe that’ll move it.”

Fundraising help? A born publicity hound like Rep. Matt Gaetz (R-Fla.) can easily raise money independently and doesn’t worry about falling out of good graces with party leadership, to the extent he was ever in such graces to begin with. What about budget bouquets to show voters back home that their member of Congress has real clout? A sincere ideologue like Rep. Chip Roy (R-Tex.) doesn’t care about these things. He thought McCarthy was not a real conservative in 2015, and he hasn’t changed his mind in 2023.

Gaetz and Roy, in fact, are good windows into the composite nature of the anti-McCarthy coalition. Part of it is motivated by disruption for its own sake — party strife, and playing to the angriest faction of the Republican crowd generates more news coverage and is more interesting than the serious work of coalition-building and governance.

One House Republican told my colleague Olivia Beavers: “I love shitshows and this is a shitshow to behold.” Another wing of GOP dissidents is so motivated by sincere anti-government belief that they will never bring themselves to support someone they perceive as a transactional operator.

But if that’s the McCarthy opposition, what of his support? He ran in part on attributes — his fundraising prowess, his accommodating manner with GOP colleagues — that would be entirely relevant for a post like head of the National Republican Congressional Committee, devoted to helping win elections. One thing he didn’t run on: Anything approximating a big idea about governance.

This makes McCarthy’s bid different than the one that vaulted Newt Gingrich and his team of “revolutionaries” to power a generation ago, after the 1994 election. Nor is McCarthy committed to anything like the sunny-side-up conservatism that Paul Ryan evangelized on behalf of, even if he couldn’t do much to advance that in his four years as speaker beginning in 2015.