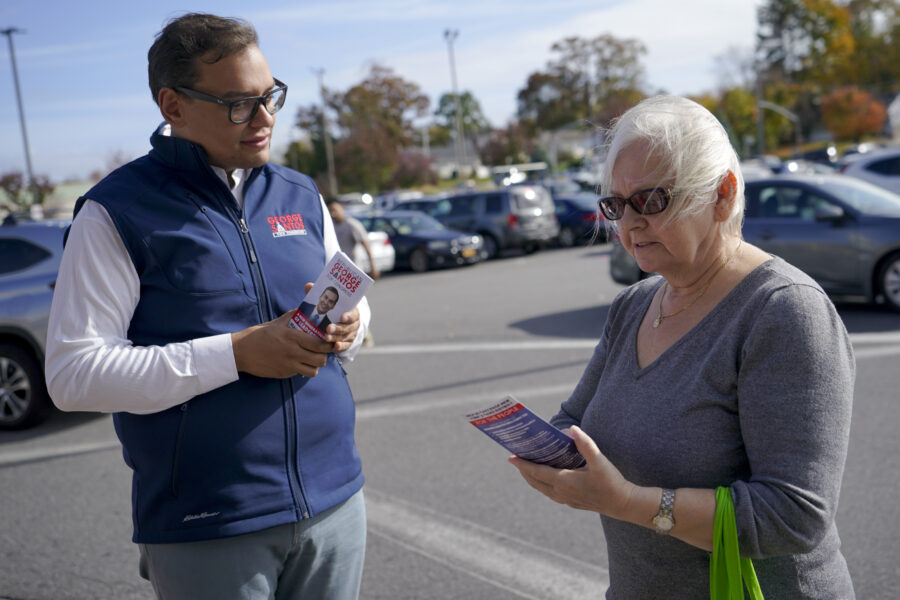 The unraveling of Santos’ campaign narrative started with a New York Times exposéon Dec. 19 that called into question claims he’d made about attending Baruch College, working at Goldman Sachs and saving thousands of dogs and cats for an animal rescue charity.

Here’s a recap of the additional dizzying developments since Monday, when the New York Republican first addressed fabrications about his resume, dismissing them as mere embellishments.

For between $100 and $500, Santos said donors could get a bus trip to Washington, lunch, a swearing-in ceremony and a campaign-led tour of the “Capitol grounds.” The invitation, first reported by CNN Thursday, launched a fresh round of questions about Santos’ ethics.

Campaign finance experts at the nonpartisan Campaign Legal Center said it wasn’t immediately clear that the offer was a violation, since the invitation didn’t explicitly say the money paid was for a tour. Additionally, the tour offer was for the “Capitol grounds,” not the Capitol building itself or its office buildings, which could be a reference to the outdoor public space around the Capitol rather than private areas. Santos could run afoul of ethics rules barring the use of official resources for campaigns, however, if he explicitly held tours or meetings with donors in congressional buildings.

Congress’ ethics watchdog recently knocked outgoing Rep. Kai Kahele (D-Hawaii), for example, for campaign social media posts from the Capitol and House office buildings. If Santos is inviting donors to the official swearing-in ceremony, it could violate those same rules. It’s an unusual move either way – lawmakers each receive a few invites to the swearing in ceremony that they typically give to family or close friends.

House GOP leader Kevin McCarthy, who is facing a rebellion among some conservatives that complicates his bid for the House speakership, as well as other conference leaders have remained silent about Santos’ admitted fabrications.

Santos is also drawing scrutiny for a series of questionable expenditures made by his campaign. The campaign spent $11,000 to rent a suburban house in Huntington, Long Island, claiming it was lodging for staff, the New York Times reported — but neighbors said Santos himself was seen living there. It’s illegal for a candidate to spend campaign funds on their own personal expenses.

The campaign also spent more than $40,000 on air travel, according to the Times — a figure far beyond what is typically spent during a local congressional campaign. Another $30,000 was spent on hotels across the country and $14,000 on car services. Dozens of expenditures by the campaign were listed in disclosure forms at $199.99, just below the $200 threshold where receipts are required.

Santos attorney Joe Murray told the Times that some campaign money was spent “unwisely” by a firm that has since been fired, but that all the expenditures were legal.

In a sign Santos’ standing is growing increasingly shaky, his campaign press secretary resigned Thursday, POLITICO first reported. The press secretary, Gabby Lipsky, had been expected to join the congressman-elect’s staff in D.C. before she stepped down, according to a person familiar with the matter.

Rep. Ritchie Torres (D-Bronx) announced Thursday night he is introducing legislation that would require candidates for federal office to disclose their employment, educational and military history under oath. False statements would be punishable as perjury.

He’s dubbing the bill the Stop Another Non-Truthful Office Seeker, or SANTOS Act. It’s unclear if the bill would go anywhere with the House GOP days from taking the majority.

Torres said his bill would focus specifically on verifiable educational, employment and military history — steering clear of questions like personal identity, where answers are more subjective. Santos has also been called out for lying about being Jewish. “There’s not a First Amendment right to perjure yourself,” Torres said.

Questions about his mother’s death

Santos is also facing questions about statements he made about the death of his mother, after journalist Yashar Ali unearthed tweets he posted with potentially contradictory accounts of her demise.

Santos’ campaign website says that his mother, who was working in the World Trade Center’s South Tower on Sept. 11, survived the attacks but “passed away a few years later when she lost her battle to cancer.”

Many 9/11 survivors developed cancer and other illnesses related to their exposure to toxins from the terrorist attack, but Santos has not clarified whether her illness was linked to the attack and groups that track survivors have no record of her ever filing for a related compensation award or lawsuit, according to Rolling Stone.

Multiple law enforcement agencies are looking into Santos’ actions. Federal prosecutors at the U.S. attorney’s office for the Eastern District of New York are reviewing public campaign filings amid questions about the source of the politician’s wealth, ABC News first reported.

The Nassau County district attorney announced an investigation Wednesday to determine if any of his fabrications amount to a crime.

New York state Attorney General Tish James’ office has also said it is looking into a number of issues related to Santos’ conduct.

A spokesperson for Santos did not return a message seeking comment.

Olivia Beavers contributed to this report.