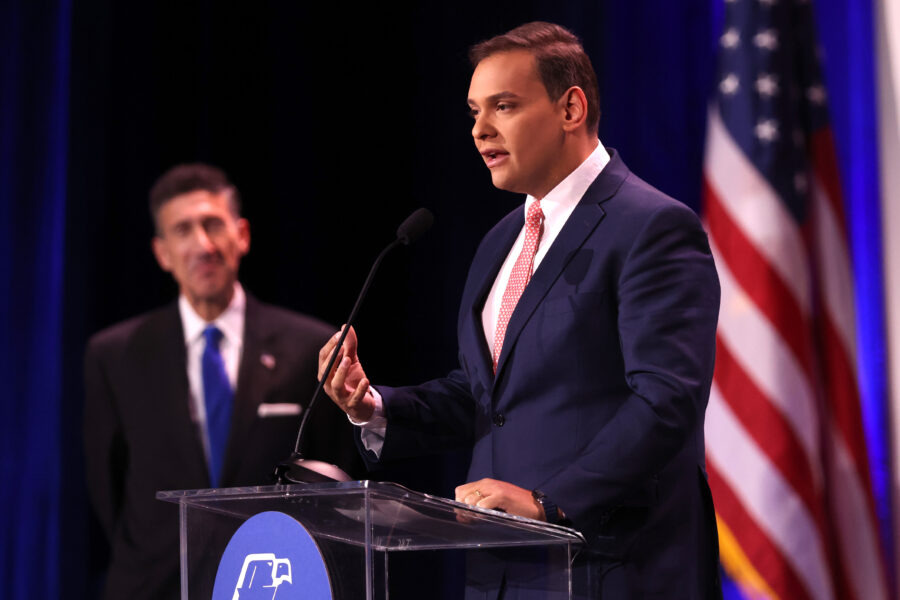 Rep.-elect George Santos had a difficult time explaining away the discrepancies in his résumé during a Fox News interview with Tulsi Gabbard, who came down hard on the New York Republican for his recent controversy.

As Santos conceded that several lies he made about his credentials were “a mistake,” Gabbard — a former Democratic congresswoman from Hawaii and the guest host of “Tucker Carlson Tonight” — refused to let him off the hook on Tuesday, pushing him on the definition of integrity and his “blatant lies.”

“My question is, do you have no shame?” Gabbard asked at one point.

Santos, elected in November to represent New York’s 3rd Congressional District, on Long Island, came under scrutiny last week whenThe New York Times published an investigation calling out inconsistencies in his background. On Monday, the congressman-electtold the New York Post that he had indeed lied about several of his credentials, admitting to having never worked “directly” for Goldman Sachs and Citigroup and not graduating from Baruch College, nor “from any institution of higher learning.”

Santos in the lead-up to the midterm elections had also fabricated elements of his family’s history, including that his mother was Jewish and that his maternal grandparents escaped the Holocaust during World War II. After referring to himself publicly as “half Jewish” and a “Latino Jew” during his campaign, Santos conceded to the New York Post on Monday that he is “clearly Catholic.”

Gabbard on Tuesday night pressed Santos on the details of his Jewish heritage, asking him to explain a letter his campaign had sent out in which the congressman-elect refers to himself as a “proud American jew.” Santos doubled down on his claim that although he was raised a “practicing Catholic,” his “heritage is Jewish” and has always considered himself “Jew-ish.”

Gabbard repeatedly called out Santos’ “blatant lies” throughout the interview, frequently cutting him off and redirecting her questions as he tried to deflect by bringing up alleged lies Democratic politicians have told and highlighting issues he had campaigned on. She specifically came down hard on the congressman-elect at one point when he contended that “everybody wants to nit-pick at me” but said he still remained “committed in delivering results for the American people.”

“The results that people are looking for are called into question when you tell blatant lies. Not embellishments. And this is, I think, one of the biggest concerns, congressman-elect, is that you don’t really seem to be taking this seriously,” Gabbard said. “You’ve apologized, you said you’ve made mistakes, but you’ve outright lied. A lie is not an embellishment on a résumé.”

The real issue, Gabbard continued, is how the “American people can believe anything that you may say when you are standing on the floor of the House of Representatives, supposedly fighting for them.”

Santos floundered in defending himself, first saying he agreed with what Gabbard was saying and then adding that “we can debate my résumé” and he could “sit down and explain to you” how he worked with private equity firms — even though he lied in his résumé about working “directly” with several firms.

“We can have this discussion that’s going to go way above the American people’s head,” Santos said. “… I can sit down and if you want to have that discussion, I’d be glad to, Tulsi, to explain that to you and make sure that we settle the score.”

“This is not about settling scores,” Gabbard replied. “And I think you just kind of highlighted, I think, my concern and the concern that people at home have. You’re saying that this discussion will go way above the heads of the American people, basically insulting their intelligence. So not only are you now backtracking on these lies that you’ve told, but you’re saying that you can’t explain it in a way that your constituents would actually be able to understand.”

Gabbard then quickly wrapped up the interview, thanking Santos for his time and then getting the final word in by calling up the question of how his constituents “could possibly trust your explanations when you’re not really even willing to admit the depth of your deception to them.”

The heated interview marked Santos’ first televised appearance since news of the controversy broke. It comes amid calls from Democrats for the congressman-elect to give up his seat, though Republicans have largely remained silent on the issue.

House Minority Leader Kevin McCarthy had applauded Santos’ election to Congress for contributing to the largest Republican Jewish caucus in more than 24 years. But McCarthy has thus far stayed quiet on the new revelations about Santos — who has publicly voiced his support for McCarthy’s potential House speakership.

Santos has seen some pushback from the GOP, though, with the Republican Jewish Coalition on Tuesdaydenouncing him and his lies in a statement. Two other incoming House Republicans from New York also released statements on Tuesday condemning Santos, with Rep.-elect Nick LaLota calling for a full House Ethics Committee investigation into his future colleague.

The district attorney for Nassau County, which is part of New York’s 3rd District, said on Wednesday that Santos’ fabrications were “nothing short of stunning” and that the county would prosecute any crime committed within it.

“The residents of Nassau County and other parts of the third district must have an honest and accountable representative in Congress,” District Attorney Anne Donnelly said in a statement. “No one is above the law and if a crime was committed in this county, we will prosecute it.”