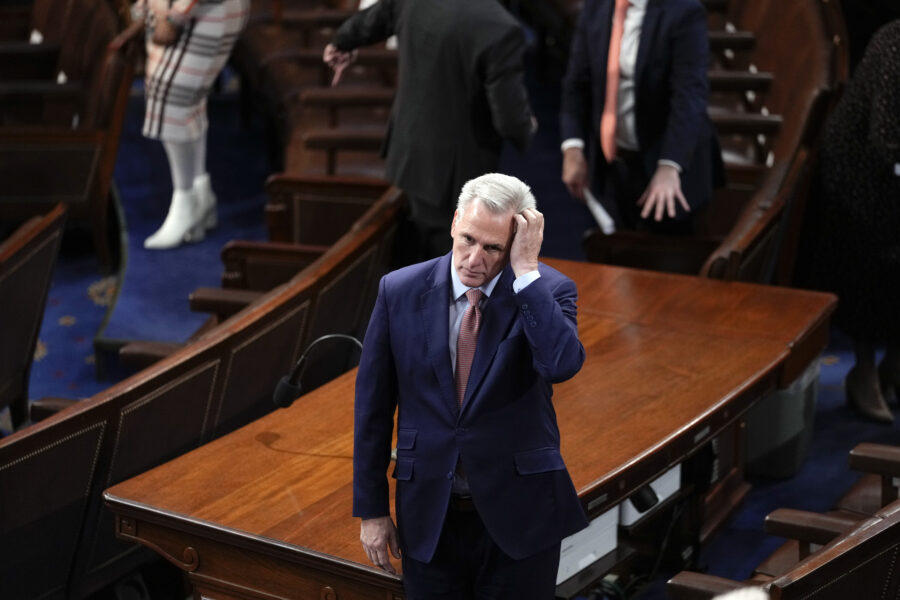 While some of George Santos’ soon-to-be colleagues are encouraging investigations into his many resume fabrications, Kevin McCarthy’s speakership battle in a narrow majority is complicating his fate.

The New York Republican, who has admitted to fabricating much of his personal and professional biography, is set to be sworn into Congress the same day the House will start votes for a new speaker.

But House GOP leader McCarthy, with only four party votes to spare and an open rebellion among a handful of House conservatives, needs all the support he can get — even if it comes from a member-elect steeped in scandal.

One Republican has openly called for an internal investigation into Santos and others have privately said he’s likely to face probes. Meanwhile, McCarthy and other members of leadership have remained silent about Santos’ admitted fabrications about his past, including his Jewish faith, that he worked for Goldman Sachs and Citigroup and that he graduated from Baruch College. 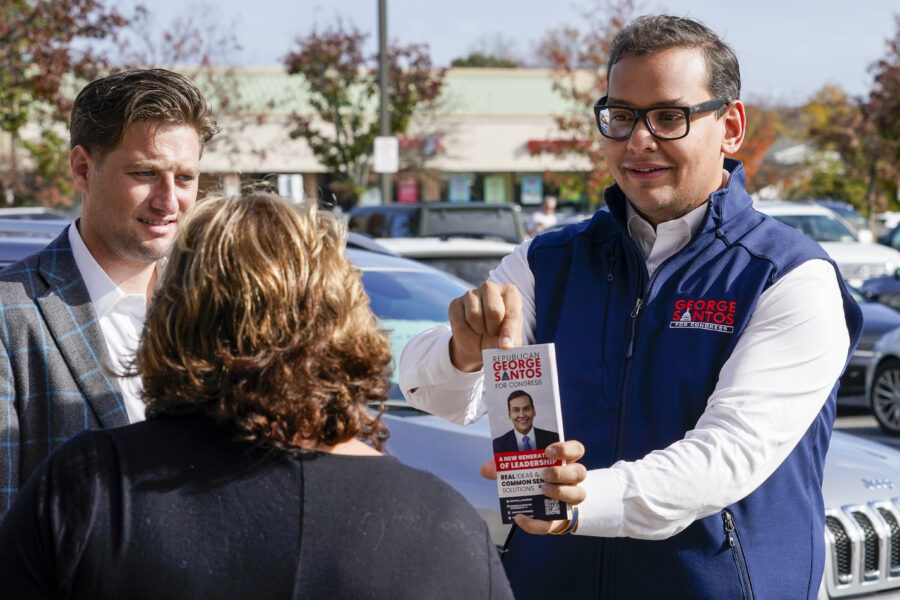 “At a minimum, it was a colossal lack of judgment that has now put the conference in a very difficult position,” retiring Rep. John Katko (R-N.Y.), who represented a similarly moderate district in the state, said of Santos.

“Do they defend someone they know has made several material misstatements about his background? Or do they cut him loose with a razor-thin majority?” Katko added, calling it a “no-win situation.”

House Republicans generally believe Santos’ future will become clearer once they have an official speaker. But right now, the Republican leader has five members threatening publicly to oppose his speakership bid on Jan. 3, which happens to be the same number required to block him from reaching the needed 218 votes. And the party is buckling in for potentially multiple votes, marking only the second time since the Civil War that the speakership race would go beyond a first ballot.

“McCarthy can’t do anything official until McCarthy is speaker. So that needs to happen before anything else,” said one House Republican who plans to support the California Republican, granted anonymity to speak candidly. “But as for Santos, I think his issues may cost him his chance at a seat in financial services until everything is sorted out. The questions around his finances are a real issue.”

As of now, only Democrats are calling for Santos to resign from the post that was considered a longshot win for Republicans in the first place. And the GOP — both locally and in the House — is unlikely to call for him to step down in the thin majority. But one Republican familiar with the discussions said Santos has told New York party leaders that he won’t seek reelection after this term. If he doesn’t make that statement openly soon, the Republican said, he risks those leaders publicly pulling support.

Representatives for Santos did not respond to a request for comment for the story.

Rep. Pete Sessions (R-Texas), a member of the Oversight Committee, told the Washington Examiner Wednesday that he’s “not supportive of [Santos] being in our conference.” He stopped short of calling on Santos to resign and said House GOP leadership needed to question him. And his incoming Empire State colleague has criticized Santos for the headlines and doubt he has triggered after Republicans campaigned on “accountability” and “integrity.”

“New Yorkers deserve the truth and House Republicans deserve an opportunity to govern without distraction,” Rep.-elect Nick LaLota said in a statement Tuesday, calling for an internal House probe and, if necessary, law enforcement investigation.

Already, the Republican district attorney for Nassau County announced she is opening an investigation into George Santos after he copped to lying about his background. Anne Donnelly’s probe comes after the New York Times reported that Santos spun a story on the campaign trail that was checkered with lies.

In an interview with the New York Post this week, Santos downplayed his false statements as embellishments of his resume and “poor” word choices. He admitted he did not graduate from Baruch College as he previously claimed, nor did he “directly” work for private equity companies that he had listed like “Goldman Sachs and Citigroup.”

He also has defended past statements claiming he is Jewish despite being a practicing Catholic, claiming that he instead said he is “Jew-ish” because his ancestors were practicing Jews. A previous campaign statement, however, showed he described himself as a “proud American Jew.”

Republican circles aren’t buying his attempts at wordsmithing. Rather, it has raised more questions about his past, with some questioning his purported wealthy status, how he self-funded part of his campaign, his connections to Russia, and even whether he was actually born in the U.S.

And the private chatter could translate to a frosty reception from his colleagues once in office. LaLota is sure to have company among Republicans in his belief that Santos’ antics paint the rest of them in a dim light, just as they prepare to take power after a campaign focused on holding the Biden administration accountable.

While Santos has sought to defend his record with conservative media, he found no friendly questioner in a Tuesday night interview with Tulsi Gabbard, a former Democrat who left the party and was filling in for Fox News host Tucker Carlson.

Gabbard, who served in the House for eight years, first asked Santos to explain the meaning of the word “integrity” and followed that up with: “Do you have no shame?”

She concluded the interview, his first TV interview since the Times report, by emphasizing that he has a credibility problem: “It is hard to imagine how they can possibly trust your explanations when you aren’t really willing to admit the depth of your deception to them.”

Capitol Hill Republicans didn’t generally perceive the interview as helpful for Santos’ image. Rep. Jim Banks (R-Ind.), the outgoing head of the Republican Study Committee, signaled his views on Twitter shortly after, writing that Gabbard did a “good job” in roasting Santos.

Still, the New Yorker received support from at least one member, who’s no stranger to prompting outrage.

“I think we Republicans should give George Santos a chance and see how he legislates and votes, not treat him the same as the left is,” Rep. Marjorie Taylor Greene (R-Ga.) tweeted, which came after she praised the incoming congressman for “being honest with his district now.”

Regardless, Republicans agree Santos will have to do a lot more to address the scandal.

“I don’t think we’re going to hear the end of this anytime soon. It’s an issue that’s going to linger for quite a while and may have serious repercussions for him personally,” Katko said.