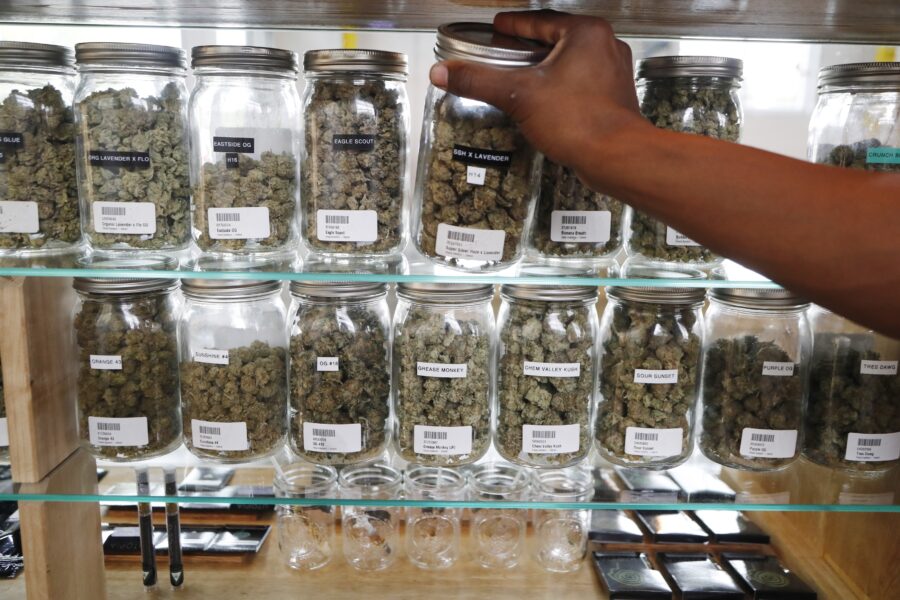 Michigan has way too much weed.

The number of cannabis grow operations serving the state’s recreational market has almost doubled in the past year. The number of active marijuana plants now exceeds 1.2 million, roughly six times the volume seen in 2020.

By one estimate, Michigan has enough cultivation capacity to supply three times as much weed as the state’s consumers are buying — and that doesn’t include the huge illegal market that by all accounts commands a large share of sales.

Michigan is emblematic of what’s been happening across the country all year — and why the industry’s been in a funk even as legalization spreads: Ill-fated hopes that a Democratic-controlled Washington might loosen decades-old restrictions on the drug have given way to a market glut and plummeting prices that have put scores of businesses at risk of collapse.

In Colorado, prices have dropped by 51 percent over the last two years, according to BDSA, a cannabis analytics firm. The price of a pound of weed has plunged by 36 percent in Massachusetts and 46 percent in Missouri in just the last year, according to LeafLink, which tracks wholesale transactions.

The price drop is even more extreme in Michigan. Over the last two years, the price of weed in the recreational market has plummeted about 75 percent — from nearly $400 an ounce to less than $100.

The slump is messy enough in Michigan that some industry officials are calling for a moratorium on cultivation licenses three years after the state launched a recreational market.

“With the glut of supply, and with so many licenses, it’s setting up businesses for failure,” said Beau Whitney, an economist who focuses on the cannabis industry, speaking of the Michigan market. “Nationally, very few people are making a profit in this industry.”

Those market dynamics are exacerbating an already grim financial outlook for weed companies even as sales are expected to reach roughly $30 billion this year — more than double the volume of sales three years earlier.

Companies face sky-high taxes because they’re treated like illegal narcotics traffickers. And the failure of a bipartisan effort in Congress this month to make it easier for marijuana businesses to access basic banking services means they’ll continue to face exorbitant rates to raise cash to run their operations. As Republicans retake the House, that dynamic is unlikely to change anytime soon.

There is one big winner amid all the market upheaval: weed shoppers.

“What you’re seeing is the market working,” said Michael DiLaura, chief corporate officer for House of Dank, which has 10 retail outlets across Michigan. “The consumer in Michigan is now getting likely the best weed in the world at by far the best prices in the world.” 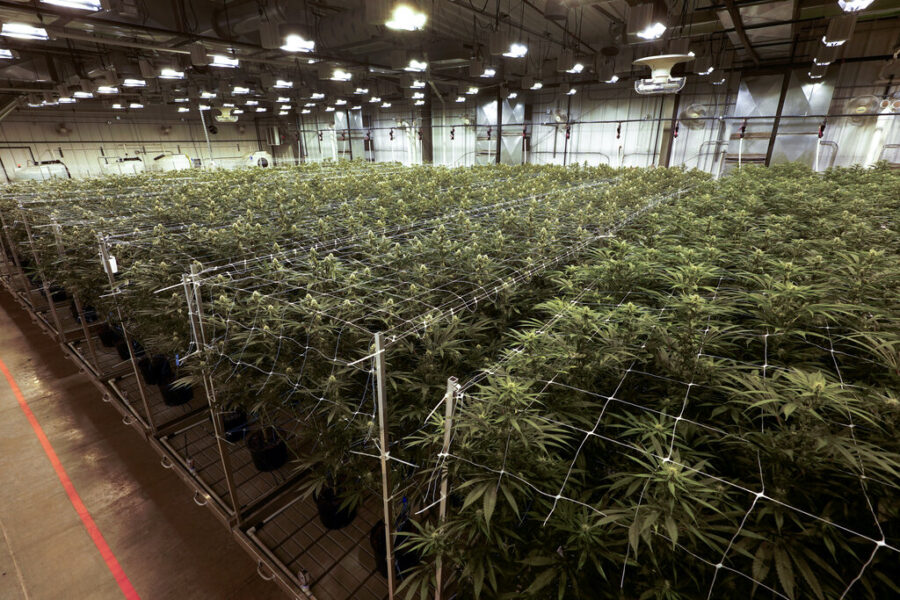 Michigan’s weed market has been in many ways a smashing success.

Sales in the adult-use market are slated to hit $2 billion this year — roughly four times the volume of sales in 2020, the first full year of operations. In just the last year, the number of retail outlets where anyone at least 21 years old can purchase weed has grown by nearly 50 percent, approaching 600 stores statewide. Nearly 30,000 workers have been approved to work in state-licensed cannabis businesses as of the end of November, according to Michigan’s Cannabis Regulatory Agency.

But by all accounts, the state has also struggled to crack down on the still-vibrant illicit market. Just 30 percent of cannabis sales came through licensed retail establishments — whether medical or recreational — in 2020, according to a study by Anderson Economic Group that was commissioned by the Michigan Cannabis Manufacturers Association. The rest of the transactions were either conducted through illicit channels or the state’s “caregiver” market that developed to serve medical patients prior to recreational legalization.

Most observers say the biggest problem is illicit cannabis seeping into the market from other states. Oregon, Oklahoma and especially California are frequently cited as sources for illegal products that end up in Michigan’s weed shops.

“There’s a lot of out-of-state product that finds its way onto shelves in dispensaries in Michigan,” said Geoff Korff, CEO of Galenas, a cannabis cultivation and retail company that launched operations in the state last year.

Michigan is hardly alone in the struggle to combat an illicit market. In California, the vast majority of sales are still from illegal sources nearly five years after the state established its recreational market. New York has seen a massive proliferation of illegal retail outlets as it prepares to launch adult-use sales. Nationwide, Whitney Economics estimates that 75 percent of U.S. cannabis sales were illegal in 2021.

Michigan officials are now vowing to crack down on cannabis scofflaws. In September, Democratic Gov. Gretchen Whitmer appointed Brian Hanna as the new head of the state’s Cannabis Regulatory Agency. Hanna’s background is in law enforcement, including stints as an intelligence analyst for the Michigan State Police and as a deputy sheriff for Kalamazoo County.

He’s made it clear that cracking down on rogue businesses is the No. 1 priority.

“We’ve been hearing [about] a lot of illicit market materials making it into the regulated market,” Hanna said in an interview. “We want to identify that and we want to find that and expose that.”

To facilitate that crackdown, the regulatory agency is in the process of hiring 11 additional staffers, including six investigators.

But some industry officials are calling for a more aggressive tactic: a moratorium on new cultivation licenses. The CRA held a public meeting in September to discuss that possibility and many business owners voiced support for the idea.

“What you tend to see is a race to the bottom at this point in the market,” said Narmin Jarrous, executive director of the Cannabis Business Association of Michigan, which has not taken a stance on a potential moratorium. “What people are doing is they’re just trying to undercut each other.“

But the prospect of a cultivation moratorium happening anytime soon looks exceedingly remote. The regulator says it needs legislative authority to adopt even a temporary moratorium on cultivation licenses. That would require approval from three-quarters of lawmakers in the House and Senate, and Democrats are about to take control of both chambers.

“The moratorium idea is out there, but I don’t necessarily know that it has momentum,” said Shelly Edgerton, chair of the Michigan Cannabis Manufacturers Association, who previously spent 16 years working in the state Senate. “The Democrats haven’t been in control for years — 40 years — and so they’re going to have a lot of things on their agenda, probably outside of cannabis.”

Democratic state Sen. Jeff Irwin, who previously served as political director for the 2018 recreational legalization campaign, argues that the industry’s struggles in Michigan have received too much attention for a market that’s only three years old. He’s concerned about illicit products seeping into the market and a lack of consistent testing of products, but doesn’t think major changes are necessary at this point.

“We’re working on a market that was completely illicit for decades and decades and decades,” Irwin said in an interview. “I think that sometimes we miss just how much progress has been made in the last few years on growing the legal market.”

Michigan’s weed glut is going to reshape the industry in the coming months. Struggling businesses will likely either collapse or get gobbled up by bigger, better financed competitors.

“We are starting to see a lot of people wanting to sell,” said Corbin Yaldoo, president of C3 CRE, a real estate firm based in Bloomfield Hills that focuses on commercial cannabis properties. “And for the well-funded, good operators, there will be plenty of opportunity for them to scoop up people for cheap.”

Common Citizen is among the businesses looking to exploit that opportunity. The company currently operates a roughly 200,000 square foot cultivation facility in Marshall and seven retail outlets serving the medical and adult-use markets.

Common Citizen CEO Michael Elias predicts the company will look radically different a year from now as it looks to go on a shopping spree. It expects revenues to double this year, mainly due to acquisitions, and projects that they’ll more than double again in 2023.

“I actually like the fact that it’s so distressed, because I’m picking up retail for a fraction of the price it was a year ago,” Elias said. “It’s a buyers market.”

A similar dynamic is expected across the country, with analysts predicting a wave of mergers and acquisitions in 2023 due in part to the fact that there are so many struggling businesses, from mom-and-pop retailers to major publicly traded companies.

“More consolidation is coming, and we’re going to see an acceleration of it next year,” said Jonathan DeCourcey, an analyst at BTIG who tracks the cannabis industry.

Elias and many others remain bullish on the Michigan market in the long term. Most market watchers believe there’s still significant room for growth, especially with some of the state’s biggest cities — most notably Detroit — yet to license any recreational businesses.

“Anyone who’s got the stomach for it, this is the time to get in,” Elias said.