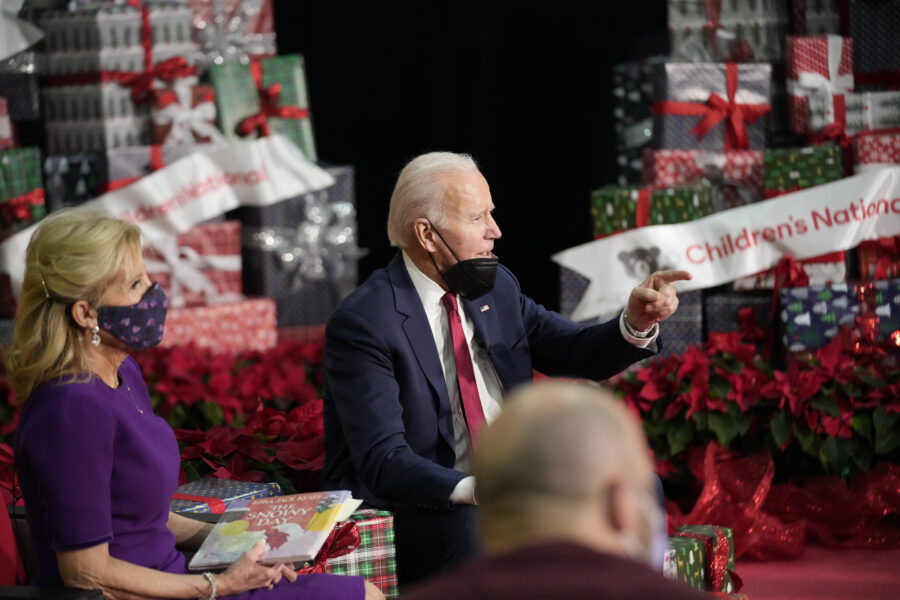 For President Joe Biden, deciding to cancel student debt might have been the easy part. Getting it done will prove to be harder.

After a drawn-out, intraparty debate over the wisdom of forgiving student debt, Biden heads into the third year of his presidency — and a likely reelection campaign — fighting to keep his signature education policy alive.

The plan heads to the Supreme Court in February, where the conservative majority will weigh the legality of canceling up to $20,000 for more than 40 million borrowers. The Education Department approved some 16 million borrowers for the program but their relief remains in limbo as the court decides.

Progressives who spent more than a year pushing Biden to cancel debt in the first place say they’re mobilizing in the coming year to hold onto a hard-fought victory.

“It felt, at times, like pulling teeth to get him to champion that cancellation,” said Natalia Abrams, the founder and president of Student Debt Crisis Center, an advocacy group that’s worked with the White House and Democrats on the issue.

“Now he’s gone full force on it,” Abrams said. “I think he does care about student loan borrowers and about this issue. I don’t see him walking away.”

With the window for major legislative victories closing as Republicans prepare to take control of the House, Biden has not fundamentally reformed how American higher education is financed. While his big plan tackles the backend of the costs, his most sweeping proposals for free college and dramatically expanding student aid are effectively dead for now.

But the unprecedented $400 billion student debt relief program, paired with Biden’s planned revamp of how borrowers repay their remaining debt, could reshape the federal student loan program for years to come — if the president can make it a reality.

“We are gearing up for another large push to make sure that we cross the finish line when it comes to this battle to cancel student debt,” said Wisdom Cole, national director of the youth and college division at the NAACP.

“To see this not come to fruition would be an atrocity for borrowers all across the nation and impact Black borrowers at a higher level,” he said. The NAACP and other civil rights groups, along with Democrats in the Congressional Black Caucus and Hispanic Caucus, were among the most vocal proponents of getting the White House to finalize a debt relief plan.

Biden’s plan was meant to be something of a middle ground between the $10,000 of relief he endorsed on the campaign trail and the upwards of $50,000 some liberals had sought. Pell grant recipients, who are the majority of borrowers and come from the lowest-income households, are entitled to up to $20,000 of relief.

Biden, and other Democrats, have credited student debt relief with helping to buoy the party’s unexpectedly strong performance in the midterm elections, losing the House narrowly and keeping control of the Senate. Biden praised turnout among younger Americans at his post-election press conference: “They voted to continue addressing the climate crisis, gun violence, their personal rights and freedoms, and the student debt relief.”

In February, Biden’s plan will go before a Supreme Court that’s already shown hostility to some of his other high-profile pandemic-era policies enacted through emergency authority. It struck down Biden’s workplace Covid vaccine rule and his administration’s extension of the eviction moratorium.

The Republican appointees on the court have come out strongly against administrative powers more generally, too. They struck down an EPA climate policy earlier this year in a landmark case that reined in agency powers more broadly. The six GOP states challenging Biden’s student debt relief have invoked that precedent.

Beyond the legal challenges to debt relief, Biden also faces a newly-empowered Republican majority that’s gearing up to scrutinize and investigate his administration.

Some GOP lawmakers are pushing to defund the Education Department’s implementation of the program. And Republican opposition to debt relief already sank any new money for the administration to carry out its student aid priorities as lawmakers negotiated the year-end government spending deal.

Rep. Virginia Foxx (R-N.C.), who is vying to again lead the House education committee, said the administration’s student loan policies will have the “full attention” of the panel. She said that GOP oversight plans will extend well beyond the plan that’s being litigated at the Supreme Court.

Republicans will also focus on “the litany of other actions” by the Education Department “that erode the integrity of the student aid programs,” Foxx said in a statement to POLITICO, citing “income driven repayment, public service loan forgiveness, and the never-ending payment pause.”

Biden’s debt relief plan has drawn the most attention, but the Education Department is also charging ahead with other changes that officials say are meant to address systemic problems in the student loan system, especially for low-income borrowers.

The administration has made it easier for bankrupt borrowers or those defrauded by their college to have their debt discharged. This spring, the Education Department plans to pull millions of borrowers out of default through a “fresh start” initiative and will award millions of other borrowers retroactive credit towards loan forgiveness. Department officials in the coming months will also unveil the details of Biden’s new income-driven repayment plan to cap interest and monthly payments for borrowers.

“These are all pieces of a larger puzzle,” said Sarah Sattelmeyer, who is project director for education, opportunity and mobility at New America, a left-leaning think tank.

“A lot of these things have been on advocates’ wish lists for a long time,” she said. “Now they’re sort of on the verge of happening, and the big question for 2023 is how we can get them implemented.”

While the White House publicly expresses confidence that its program is legal and will pass muster at the high court, there are already rumblings on the left for how Biden should respond to a legal defeat.

One option would be having the Education Department invoke a different legal power to cancel debt if the Supreme Court rejects the Biden administration’s argument that a 2003 law gives it the emergency authority to forgive debt as a response to the Covid-19 pandemic.

Progressives, led by Sen. Elizabeth Warren (D-Mass.), for years have argued that the secretary of education has the power to erase large amounts of debt under the Higher Education Act’s “compromise and settlement” power.

The White House opted against using that law for its debt relief program, and officials haven’t said publicly if they view it as a viable alternative. But the Biden Education Department has already used that settlement authority to discharge billions of dollars worth of federal student loans, mostly for borrowers who claimed they were defrauded by a for-profit college.

Regardless of how the Supreme Court rules, the NAACP’s Cole said, the Biden administration should make sure that debt relief happens “by any means necessary.” That includes “examining other solutions or alternatives” for canceling student debt if the high court knocks down Biden’s first attempt.

Abrams, of the Student Debt Crisis Center, said: “We need to have a very clear Plan B, where borrowers can see relief one way or another.”