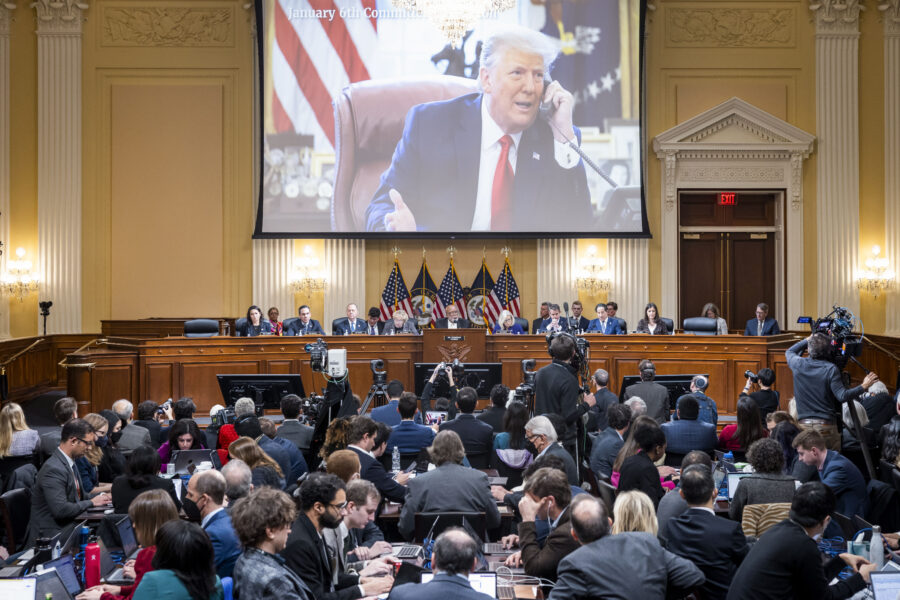 Far-right extremists who believed they were answering Donald Trump’s call to stop the transfer of presidential power didn’t just join the Jan. 6 mob — they led it.

The first wave of rioters to enter the Capitol during the siege, according to the Jan. 6 select committee’s final report released Thursday night, was disproportionately comprised of members of the Proud Boys, Three Percenters, QAnon fanatics and so-called Groypers loyal to Nick Fuentes, the former president’s racist and antisemitic recent Mar-a-Lago dinner guest.

Among the central findings of the select panel’s report: Trump’s incendiary lies about the 2020 election activated an extraordinary coalition of far-right militants and conspiracy theorists who not only joined the mob but were its vanguard smashing through police lines. Those extremists chose Jan. 6, the report outlines, in large part because Trump told them to in a now-infamous tweet: “Be there. Will be wild.”

“The January 6th attack has often been described as a riot — and that is partly true. Some of those who trespassed on the Capitol’s grounds or entered the building did not plan to do so beforehand,” the committee found. “But it is also true that extremists, conspiracy theorists and others were prepared to fight. That is an insurrection.”

The interplay between Trump world and shadowy right-wing extremist networks dominated the voluminous final report cataloging Trump’s multipart bid to subvert the 2020 election and prevent Joe Biden from taking office. The document emerged nearly two days later than initially anticipated, as the select panel raced to wind up its work with a dwindling staff footprint in the waning days of its mandate from departing Speaker Nancy Pelosi. But the unspoken alliance Trump developed with those who would go on to do violence and destruction in his name stands out as a central conclusion of the committee’s year and a half of investigative work.

Those communications happened after Trump, confronting a failed effort to unravel his loss to Biden, exhorted allies to descend on Washington and pointed an angry crowd to the Capitol, where outnumbered and underprepared police officers quickly became prey.

The select committee has spent months outlining the former president’s bid to subvert the 2020 election, concluding that Trump committed multiple crimes in his quest to corruptly seize a second term. But its final report sheds new light on the nexus between Trump boosters and members of the Proud Boys and Oath Keepers, as well as other groups.

That in-depth analysis is the product of nearly 1,200 witness interviews and reams of hard-won documents, arriving just days after the select panel held its final open meeting to approve the report’s release. It’s likely the last public action from the select panel, which is set to expire at the end of this Congress.

The eight-chapter report traces each element of the last-ditch effort by Trump and his allies to undercut the election. Four appendices to the document break down security and intelligence failures leading up to Jan. 6, the money trail of the “Stop the Steal” rally on the Ellipse, and an analysis of foreign actors’ capitalization on Trump’s election disinformation.

Juxtaposed with the magnitude of the report was its somewhat chaotic conclusion: The select panel had originally targeted a Wednesday release, but Ukrainian President Volodymyr Zelenskyy’s last-minute trip to Washington likely complicated the schedule. Then, the select panel abruptly released the report Thursday evening, with a placeholder date left on its cover page.

Rhodes texted the group amid the Jan. 6 attack that he was at “the back door of the U.S. Capitol,” the committee noted.

Stone, whom Trump pardoned at the end of 2020 for his effort to obstruct Congress’ probe of Russian interference in the 2016 election, relied on members of the Oath Keepers for protection in December 2020 and on Jan. 6, 2021, including several who later pleaded guilty to seditious conspiracy.

Stone was also filmed by a documentary crew days before the 2020 election suggesting that Trump should declare victory even before the votes were counted, a tactic the then-president would soon adopt in an effort to sow false doubts about the results. The panel sent staffers to the Netherlands to view and obtain the footage of Stone.

The panel also details Fuentes’ trip to the Capitol on Jan. 6. Though he didn’t enter the building and has not been charged with a crime connected to the attack, many of his followers — known as “Groypers” — have been identified among the early wave of rioters.

“As the attack was underway, Fuentes incited followers from his perch immediately outside of the U.S. Capitol. Some of his followers joined the attack inside, with one even sitting in Vice President Pence’s seat on the Senate dais,” the panel noted.

Fuentes later described the chaos he witnessed on police lines that day as “awesome” and said he hoped to see similar energy at future events. When he testified to the Jan. 6 committee, he repeatedly pleaded the Fifth.

Trump drew widespread rebukes for hosting Fuentes at his Mar-a-Lago estate in November, and reports suggest the white nationalist leader urged Trump during their meeting to more vocally defend those who breached the Capitol.

The executive summary of the report, which dug into nearly every aspect of Trump’s last-ditch effort to stay in power and recapped much of the ground covered by the select panel’s public hearings over the summer, was released on Monday. The committee’s nine lawmakers are aiming not only for an entry in the historical record, but also to send a signal flare to prosecutors and the voting public.

“The Committee recognizes that this investigation is just a beginning; it is only an initial step in addressing President Trump’s effort to remain in office illegally,” Vice Chair Liz Cheney (R-Wyo.) wrote in a foreword. “Prosecutors are considering the implications of the conduct we describe in this report. As are voters.”

The report’s final chapter is an extensive analysis of the mob attack, relying on surveillance footage and video taken by the media and rioters themselves. That analysis shows that an early wave of rioters, many who arrived at the Capitol even as Trump continued to address a rally on the Ellipse, was packed with members of extremist groups and QAnon adherents.

Most prominent among them were the Proud Boys — including Nordean and Biggs — who were conspicuously present at several breaches of police lines and when the breach of the Capitol building itself occurred. But the panel found the Proud Boys were buttressed by Three Percenters, Groypers and other far-right extremists as they ignited the initial breach.