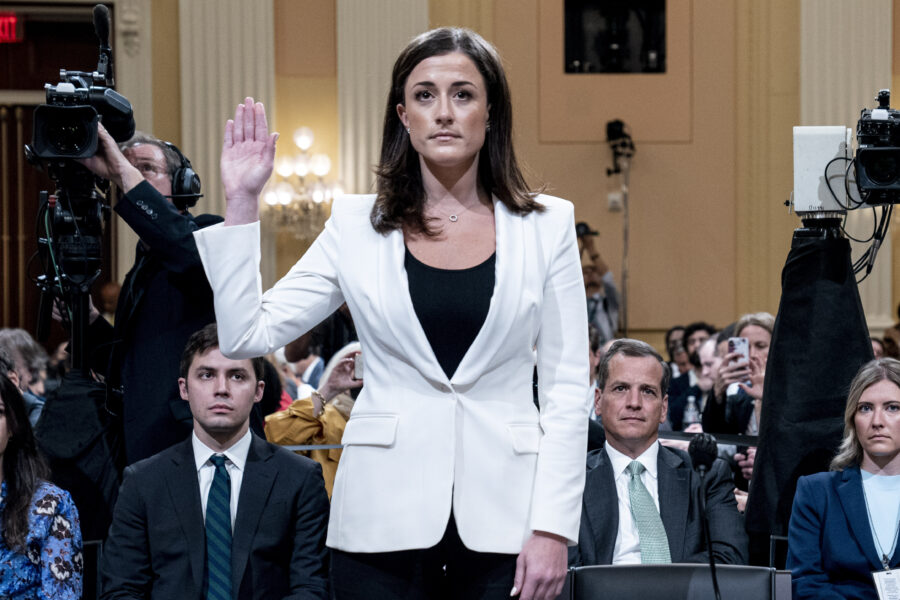 In the Sept. 14 interview — her fifth as a witness for the select committee — Hutchinson described frequent calls with McCarthy in the run-up to the attack on the Capitol and said that he told her he was afraid then-White House chief of staff Mark Meadows had not adequately prepared Trump to accept defeat.

Hutchinson said McCarthy had told her Trump would repeatedly acknowledge his loss in private but then almost immediately change his mind and say it was possible for him to remain in office. “I can only imagine that’s coming from Mark,” McCarthy said, per Hutchinson’s testimony. The select panel’s release of two Hutchinson interview transcripts from mid-September interviews came as it prepares to publish its final report in full, expected later Thursday.

In addition to the candor from McCarthy about Trump — who has endorsed the California Republican in next year’s House speaker race but has not received McCarthy’s similarly unequivocal endorsement in his 2024 presidential bid — Hutchinson’s interview also shed new light on alleged pressure from her Trump-aligned former attorney to conceal key evidence from select panel investigators.

The bulk of Hutchinson’s lengthy Sept. 14 interview focused on her strained search for a lawyer as she recognized the select committee was pursuing her testimony. She told the committee that her first lawyer, Stefan Passantino, repeatedly pressured her to claim she couldn’t recall things even if she did — telling her to adopt the approach that “you were a secretary” with little knowledge of the Trump White House’s inner workings, despite her awareness of them.

Passantino, she said, told her to provide as little detail as possible to the select committee and simultaneously spoke with her about job opportunities, which she viewed as veiled efforts to buy her loyalty. In particular, he told her not to disclose her recollections of a conversation with then-White House deputy chief of staff Tony Ornato about an incident between Trump and his Secret Service detail on Jan. 6.

Before deciding to cooperate with the select panel’s probe, Hutchinson switched attorneys; she’s now represented pro bono by former DOJ official Jody Hunt. Passantino’s legal fees had been paid by a Trump-allied group, the committee has disclosed. When Passantino first called Hutchinson about her legal representation, he refused to tell her who was funding his services, Hutchinson told investigators.

Hutchinson’s account of Passantino’s influence offers a behind-the-scenes glimpse of her reckoning with becoming a prominent witness for the select committee. She burst into public view in April, when the select committee’s court filings included partial transcripts of her February and March interviews with the panel, both offering extensive detail about crucial meetings between GOP members of Congress and figures in the Trump White House strategizing about overturning the election results.

In her Sept. 14 interview, Hutchinson said she had been talking to McCarthy before Jan. 6 about a potential plan for Trump to travel to the Capitol that day in an attempt to encourage GOP lawmakers to overturn his defeat in the 2020 election. Although McCarthy sought to dissuade that Trump visit to the Capitol and blamed Meadows for trying to persuade the then-president he could still win the election, the Californian ultimately voted to challenge certification of Joe Biden’s victory.

At other points in her interview, Hutchinson indicated that she also felt pressure from other people close to Meadows. She identified Ben Williamson, a Meadows aide who she said had been a friend during their service in the Trump administration and in the ensuing year after Jan. 6, as one of those people.

In the interview, Hutchinson identified Williamson as the source of a message she received on the eve of her second select committee interview, assuring that Meadows viewed her as loyal and part of the “team.”

“He knows you’ll do the right thing tomorrow and that you’re going to protect him and the boss,” she recalled Williamson saying.

She also told investigators she believed Meadows used Williamson as a “conduit” to learn about the depth of the select panel’s knowledge: “I always understood that Mark [was] using Ben as a conduit to get information from me so he wasn’t in the dark about anything.”

POLITICO reported at the time of that hearing that a Meadows intermediary had contacted Hutchinson ahead of her testimony, and Williamson commented on Meadows’ behalf then that “no one from Meadows’ camp, himself or otherwise, has ever attempted to intimidate or shape Ms. Hutchinson’s testimony to the committee.”

Williamson and a McCarthy spokesperson did not immediately respond to a request for comment. An attorney for Meadows declined to comment.

Passantino responded with a statement similar to one provided to media outlets earlier this week in response to reports that he told her not to recall certain details. He said he represented Hutchinson “honorably, ethically, and fully consistent with her sole interests as she communicated them to me.”

“I believed Ms. Hutchinson was being truthful and cooperative with the Committee throughout the several interview sessions in which I represented her. It is not uncommon for clients to change lawyers because their interests or strategies change,” he added.

Hutchinson’s newly released testimony also discussed conversations with Ornato, the former Secret Service and Trump White House official whose testimony the committee has called into question. She recounted an April 16, 2021, call with Ornato where he made a dark joke to her about how “the President could have tried to strangle you on Jan. 6th.”

She recalled laughing and replying: “That’s true. At least he didn’t try and do that.” She assumed he was referring to a violent altercation between Trump and his security detail in the presidential SUV on Jan. 6.

During her interview, Hutchinson also expanded on her own internal conflict about whether to cooperate with the select committee more fully, as she grappled with competing pressures. She said she began researching Watergate-era figures and eventually looked into the history of Alexander Butterfield, whom she noted held a comparable position in the Nixon White House.

She said she quickly ordered two copies of a book Butterfield recently wrote with Bob Woodward and read it three times.

“He had talked about, like, how he fought the moral struggle, where he felt he still had to be loyal to the Nixon White House, but he talked about a lot of the same things that I felt like I was experiencing,” Hutchinson said, adding: “The emphasis he placed on the oral questions that he was asking himself resonated with me.”

A second Hutchinson interview released publicly on Thursday, dated Sept. 15, focused on other loose ends from her earlier testimony.

The select panel published several other transcripts Thursday evening, including from witnesses who also testified publicly like former White House press aide Sarah Matthews and Jan. 6 attack participant Stephen Ayres. They also released a transcript of a June 2022 interview with Ken Klukowski, who advised former Justice Department official Jeffrey Clark, where he largely told investigators he did not recall the answers to their questions.