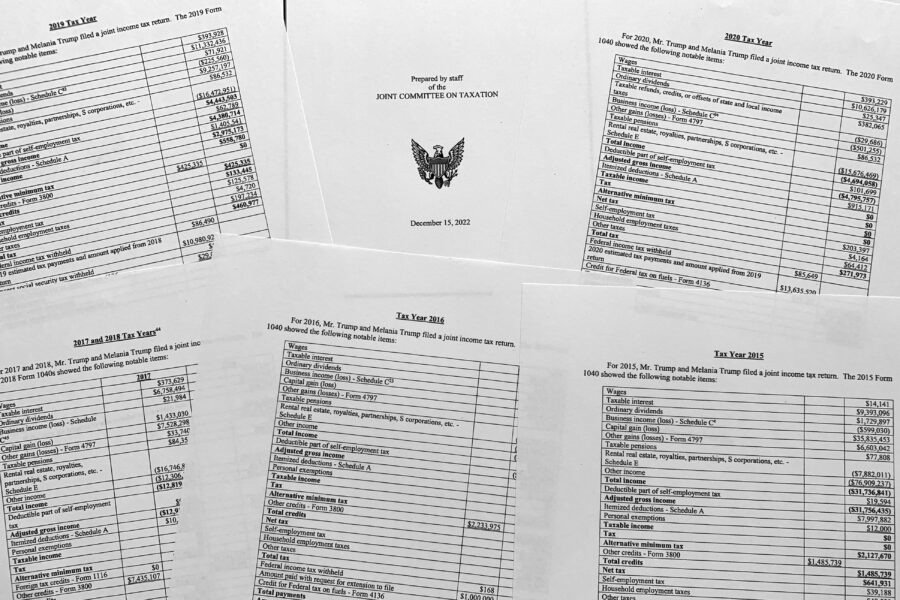 An entire office of tax experts has been quietly studying former President Donald Trump’s still-unreleased tax returns for weeks and produced a report showing he paid little or no federal income tax while in office.

Though not well known outside tax circles, the Joint Committee on Taxation is Congress’ brain on tax issues, and the House Ways and Means Committee turned to the nonpartisan agency for help deciphering Trump’s exceedingly complicating filings.

Since late last month, JCT has been poring over documents behind closed doors and says in a report released this week by Democrats that there are multiple issues that the IRS should be examining. (Lawmakers say Trump’s raw returns will soon be released after they’ve been scrubbed of sensitive information like his Social Security number.)

MAMMOTH BUSINESS LOSSES: The single-biggest issue in Trump’s taxes is the massive losses he is claiming — it is the primary reason he paid little or no tax between 2015 and 2020.

Businesses are taxed on their profits, so if they can show their earnings are being swamped by their expenses, they can erase their IRS bills. And if those losses are more than big enough to wipe out income in one year, the remainder can be deducted in subsequent years too, offsetting earnings and thereby reducing tax bills in them as well.

Without those losses, Trump’s taxes would look fundamentally different. In 2016, for example, when he paid just $750 in federal income taxes, he reported $30 million in earnings but also $60 million in losses.

The big question is whether those losses are legitimate.

“It’s the elephant in the room,” said Steve Rosenthal, a senior fellow at the Tax Policy Center.

It’s hard to tell because it appears those losses began in years that predate the returns Democrats received.

Rosenthal said lawmakers made a mistake in not demanding more of Trump’s filings from previous years, when the losses were first claimed.

Little has been publicly known about how the IRS goes about implementing its long-standing policy of auditing every president. But JCT’s report indicates the IRS has been examining those losses, and it appears to be one reason why the department was slow to audit Trump’s subsequent returns.

The IRS’s approach to auditing Trump’s 2015 return was affected, JCT said, by “the complexity of issues being worked for tax years 2009 through 2013” and “the prior years’ tax liabilities have not been settled.”

MINGLING EXPENSES?: There are multiple instances in which Trump may be improperly deducting money spent on personal activities and hobbies as business expenses.

JCT says it found many filings that are used to report streams of income where his earnings and expenses exactly matched, or where there was no reported income at all — a sign of potential improper mingling of expenses.

Aside from the unlikelihood of income and costs exactly equaling, it raises the question of whether someone would bother with a business in which their expenses consumed every dollar they made.

It also found Trump deducting expenses — $342,182 in 2020 — for a single family home deemed a rental property that had no income associated with it.

“We would recommend inquiring about the high level of expenses for the residential rental property, as well as whether such property was actually held for rent during 2020,” the report said. “If the property is not used in a rental real estate activity, it raises the question of whether the residence might be held for personal use.”

That raises eyebrows because that could be a way to get around the gift tax. If he gave money outright to his kids, it would likely be subject to a stiff 40 percent tax. The gift tax is designed to prevent people from escaping the estate tax by giving money away to their kids, for example, while they’re alive.

Calling that money a loan would avoid the gift tax while also allowing his children to deduct from their own taxes the interest they paid him.

The IRS has seen this before and has rules about when those would be considered legitimate loans by requiring minimum interest rates being paid.

The easements allow people to take charitable deductions for promising to cordon off property from development to protect wildlife, for example. The question here is the value assigned to the land — the bigger the value, the larger the deduction.

New York Attorney General Letitia James is now challenging this same conservation easement valuation in court, alleging Trump and his business “manipulated the appraisals to inflate the value of the donated development rights” at Seven Springs and another property.

The IRS did not initially pursue an audit of the deduction because Trump couldn’t take a charitable deduction that year since he didn’t have any taxable income. The IRS later reversed itself, though JCT says it doesn’t know why.

JCT said it ought to be examined because even if Trump couldn’t claim it one year, it could still be taken in subsequent years.

FOREIGN TAXES: Trump didn’t pay much U.S. tax in the returns examined — just $1.8 million over the six-year period. But in 2018 he claimed a foreign tax credit for paying $1.3 million to other governments.

People can claim a credit for paying levies elsewhere, something that’s designed to spare people from having to pay taxes twice on the same dollar. The question here is whether those are legit.

The IRS should be asking to see the receipts, says JCT.