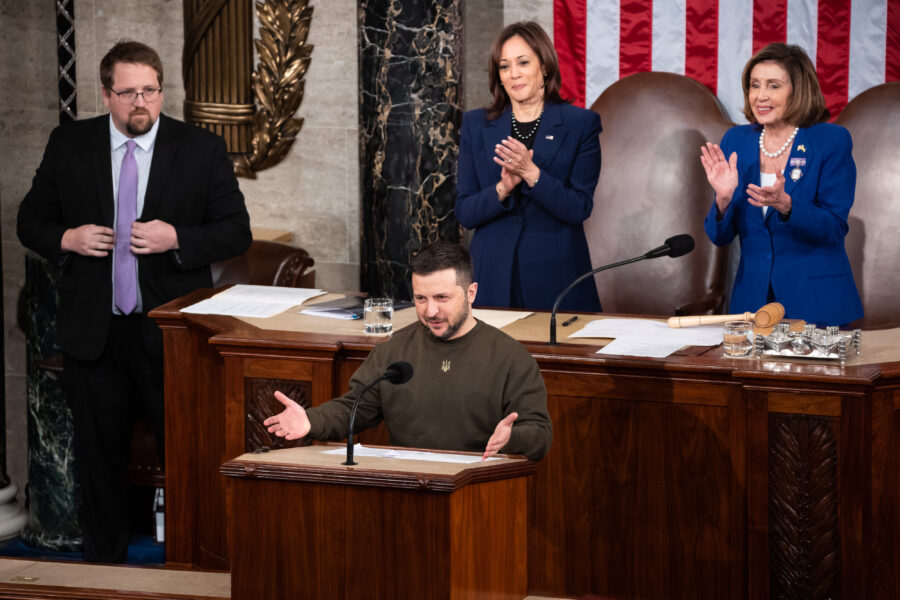 Biden’s response: “We’re working on it.”

The two leaders spoke at a joint news conference in the East Room of the White House after meeting to discuss how the U.S. could help Ukraine make it through the winter amid ongoing missile attacks from Russia. The Ukrainian leader then continued on to Capitol Hill, where he’s making an address to Congress about Ukraine’s battle to fend off Russian bombardments.

Weapons have been at the center of the discussions between Zelenskyy and U.S. officials, as Ukraine continues to ask for more advanced and longer-range systems that can help it keep up its momentum against Russian forces. The U.S. has responded by increasing the amount and types of weapons it is supplying Ukraine, while staying away from providing long-range missiles that could be used to strike deep inside Russia.

The Patriot system is the latest example. Providing the system — the first-ever transfer of a Patriot — to Ukraine was seen as a major gain for the country in its defense against Russia’s persistent airstrikes on the country’s energy infrastructure. Zelenskyy has been asking for months for the Patriot system, and so Biden is giving him a win.

But Zelenskyy made it clear that he needs more such wins.

Responding to a reporter’s question about what message he’s sending to Putin with his visit, Zelenskyy said it’s that the alliance with Biden is strong, then added: “You said, what’s going to happen after Patriots are installed? After that, we will send another signal to President Biden that we would like to get more Patriots.”

Asked if the Patriot system could be considered escalatory, Biden rejected the idea, arguing that it will be used to shoot down Russian missiles bombarding Ukrainian cities.

When asked about providing Ukraine with long-range missiles that could strike Russia, such as ATACMS, Biden warned that such weaponry could potentially break up NATO and the European Union.

“The idea that we would give Ukraine material that is fundamentally different than what’s already going there would have a prospect of breaking up NATO, and breaking up the European Union, and the rest of the world,” Biden said in a response to a reporter’s question. He also said allies “don’t want to start a third world war.”

Still, support for Ukraine will continue, both leaders said. Zelenskyy also said he believes that despite changes in Congress, “there will be bipartisan and bicameral support” for ongoing aid to Ukraine.

Zelenskyy’s trip to D.C. — his first trip outside of Ukraine since Russia invaded nearly 10 months ago — is a strategic show of unity between the two countries.

But the briefing by the two leaders also revealed the worries that backing for Ukraine could wane as fighting drags on.

Officials in Washington and Kyiv fear that the new GOP-led Congress may be less willing to funnel money into the conflict, even as Moscow continues to bombard Ukrainian infrastructure, leaving millions of people without power. Ukrainian officials have expressed concern in recent days that Russia is planning a new offensive to take Kyiv as soon as January.

Rep. Ralph Norman (R-S.C.), a Freedom Caucus member, said he did not plan to attend Zelenskyy’s speech Wednesday night because he is opposed to any further government spending on Ukraine.

“We have a total SELLOUT with this Omni spending monstrosity with NO OFFSETS!!” Norman wrote in a text to POLITICO. “I’m against any more funding for Ukraine and his words will not change my mind!!”

Zelenskyy met with the top four congressional leaders about half an hour before his address in a meeting room off the House floor. He walked in with Senate Majority Leader Chuck Schumer (D-N.Y.) to his left, outgoing Speaker Nancy Pelosi (D-Cali.) right behind him, and Senate Minority Leader Mitch McConnell (R-Ky.). House Minority Leader Kevin McCarthy (R-Cali.) was already in the room waiting.

One way the Biden administration has worked to keep allies both domestic and foreign aligned is by arguing that there is potential for peace in Ukraine, but only as long as there’s support for the current fight.

The Patriot system is part of a $1.85 billion package announced Wednesday that also includes Joint Direct Attack Munitions kits, which are used to convert aerial munitions into smart bombs, along with ammunition, mortars, armored vehicles and more.

In regards to negotiations with Putin, Biden stressed that Zelenskyy is open to talks while the Russian leader isn’t.

Zelenskyy described a just peace as “no compromises as to the sovereignty, freedom and territorial integrity of my country.” In recent weeks, Putin has said he won’t consider peace talks with Ukraine if it means he has to concede territory that he illegally annexed.

“I think we share the exact same vision,” Biden said.