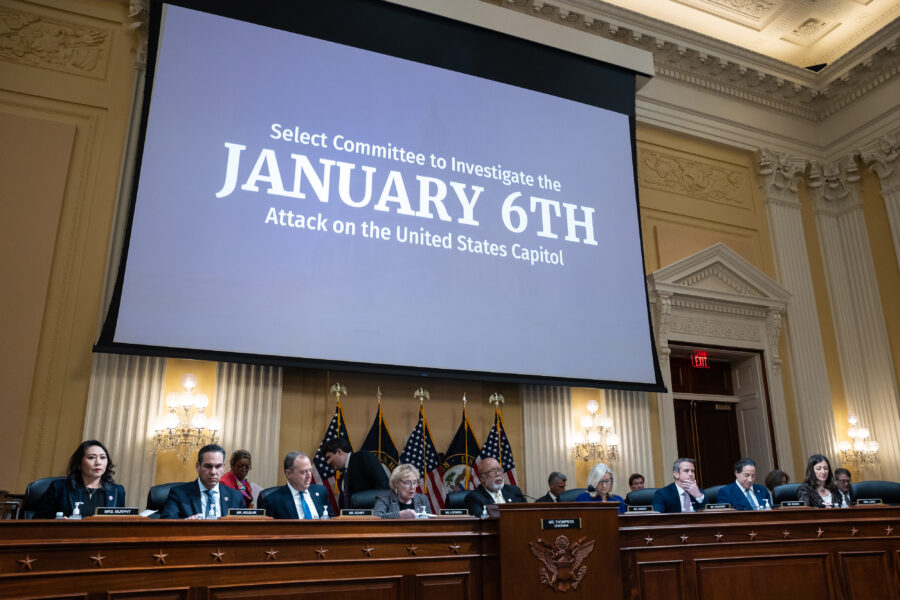 In the end, the insurrection was just the back-up plan. That’s one critical finding by the Jan. 6 select committee to keep in mind when digesting its sweeping criminal referrals of Donald Trump.

The former president floated the idea of marching on the Capitol with a “large and wild crowd” only after his White House advisers and lawyers aggressively tried to quash a quilt of crazy schemes to use federal courts, election administrators, state legislators and ersatz presidential electors to thwart the lawful, peaceful transfer of power. It was a last-ditch resort. And the violence of Jan. 6 would have had its intended effect only if some of those legal machinations had already put enough sand in the gears of the democratic process.

For understandable reasons, Rep. Liz Cheney’s opening remarks at Monday’s final committee meeting drew attention to Trump’s fatal inaction in the minutes around the insurrectionists’ violent entry to the Capitol. Chairman Bennie Thompson likewise started his montage with that day’s violence before working backward to set forth in crisp detail its larger context.

But the context of that violence is vital: The Jan. 6 mob, regardless of how deadly it was, could not have derailed American democracy on its own. Only because there were individuals — including in elite political circles — who were ready to seize on the ensuing chaos did that day have the chance to be nationally destabilizing as well tragic for the blood shed and the lives lost. The former president and his allies were all too eager to use the complex channels of presidential election machinery to invoke a constitutional crisis this country had never seen before.

It was, in other words, not just the violence of Jan. 6 that mattered. It was the larger, structural weaknesses of American democracy that the committee has highlighted that deserve attention — and which are in danger of being eclipsed by the immediate headlines what the Department of Justice will do next.

The committee plainly understands as much. Thompson’s montage rightly drew attention to the fact that it was not just those hurt or killed on Jan. 6 who were harmed by Trump’s efforts to unlawfully thwart the transfer of power. He noted the violent threats and the sickening fear experienced by Ruby Freeman and Shaye Moss, Georgia election workers whose lives were upended by the dark frauds of Trump’s election denialism.

Even if the committee’s referrals help stimulate indictments from the Justice Department, the criminal justice system can do little to address many of the weaknesses that Trump and his allies tried to exploit in the state and federal election apparatus.

And the very fact that that the committee’s criminal referrals against Trump have seized the public spotlight is arguably a problem: It draws attention away from the weaknesses inherent in our system that Trump and his allies tried to exploit. It elides the continuing danger posed by government lawyers, members of Congress and private citizens who — as the committee has etched out clearly — knowingly exploited those weaknesses. Unrepentant, and still looming large in public life, they continue to do so now.

Take the law professor John Eastman, who received his own criminal referral by the committee. Trump leaned repeatedly on Eastman’s theories about the power of “independent” state legislators to forward slates of presidential electors in defiance of voters’ expressed judgment. Yet a year and a half later, Eastman is peddling a (milder) version of the same theory in a Supreme Court amicus brief — possibly gaining the support of three conservative justices. While the court’s pending decision on the independent state legislature theory bears only on federal legislative elections, it would be reckless to dismiss the risk that the justices’ imprimatur won’t license new, creative mischief when it comes to presidential results.

Or consider the sitting politicians who coordinated with Trump’s illegal efforts to thwart the democratic process. A facile take would be that election denialists allied with Trump were roundly defeated in the midterms. But this is just not so: Incumbent Republicans who denied the truth about the election, in fact, overwhelmingly won last month, and their voters continue to have low levels of trust in the election process. And as misinformation explodes afresh on Twitter, it would be reckless to imagine that candidates’ lies about how our democracy and laws are working will somehow abate.

As Rep. Jamie Raskin noted Monday, none of the House Republicans conversing with Trump before Jan. 6 agreed to testify before the committee. Yet many will not just be in the majority, but possibly in positions of leadership in just a few weeks. Whatever the House Ethics Committee does in the days ahead, what matters is that there is no durable mechanism in place to forestall or punish elected representatives who violate the public trust in this way. Specifically, there is no clear, legislated structure to bar insurrectionists from holding office as required by Section 3 of the Fourteenth Amendment.

Or consider those who participated in the fake slates of electors. The process of certification, and wide array of state officials and private citizens involved in it, remains vulnerable to wrongdoing at multiple points. The committee’s referral to DOJ on making false statements rightly homes in upon the fake presidential elector slates. Such prosecutions may well have real deterrence effects. This is important because so far, state prosecutors in six out of seven states are failing to investigate or bring charges after false slates were assembled, voted upon and transmitted to the U.S. Archivist.

A comprehensive response to Trump’s conspiracy against democracy, the committee’s work powerfully shows, is not exhausted by criminal referrals. It is not limited to revising the Electoral Count Act. It extends to legislation to mitigate the risk of runaway state legislators, to larger efforts to reform and depoliticize state election administration, to rethink the Supreme Court’s ability to destabilize democracy with so-called originalism, and to make real progress on building a trustworthy public sphere.

None of this is to suggest that the criminal referrals are unwise. But it would be wrong to think they’re the final step or, for that matter, to ignore their risks. They may make it easier for Trump and allies to discredit subsequent indictments by special counsel Jack Smith (although no doubt they would make that effort anyway).

Perhaps more worrying is the possibility that the referrals might have perverse long-term effects. Political scientists have observed that raising the stakes of a conflict can lead participants to make even more risky bets: It’s called “gambling for resurrection.” One can imagine a future Trump-like figure, knowing that they would face prison, would pull out even more stops to derail an election next time. Perhaps these risks are worth it — but they also show that the criminal law cannot be the beginning and end of the matter.

Written off precipitously before it even began its work, the Jan. 6 committee has plausibly broken through to the broader public. It would be a profound shame if the committee’s vital work was misunderstood as a howl for revenge, rather than the more profound call for democratic renewal that it truly is.