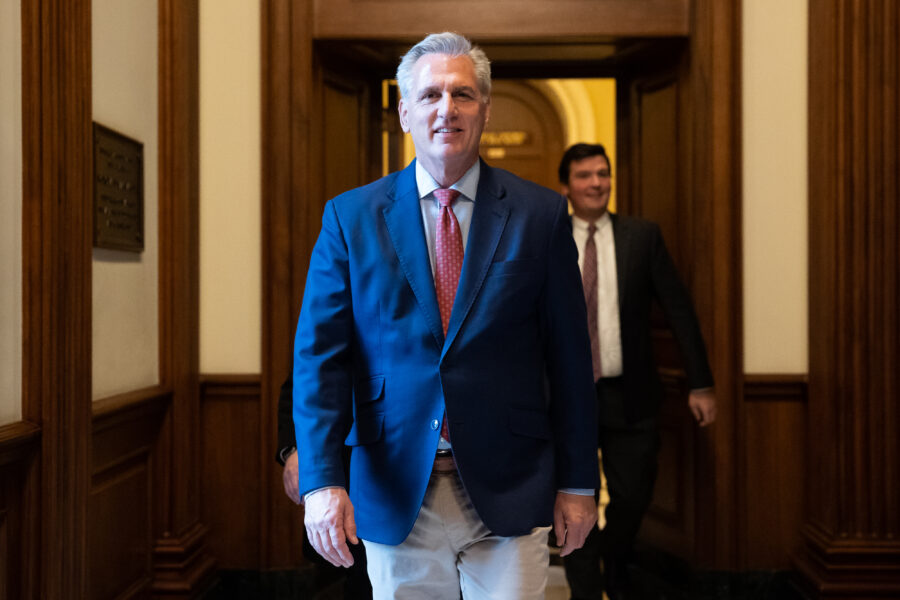 The GOP leader on Thursday took the unusual step of punting conferencewide races for committee leadership slots until after his speaker election on Jan. 3, a maneuver that could help insulate him from disgruntled members who fall short in those contests and their allies.

But that delay will also mean days, if not weeks, of uncertainty for GOP committees as they begin their stint in the majority. Some of the most important panels, including those charged with tax-writing and border security, won’t be able to prepare bills, tee up hearings, or even hire staff. While some House committees already have uncontested leaders in place, those chairs won’t be able to choose their member lineup or potentially pay staff. The GOP’s subpoena power, too, will be frozen.

“Without question, delays in selecting chairmen and committee members put a lot of pressure on the agenda,” said retiring Rep. Kevin Brady (R-Texas), who led the influential House Ways and Means Committee the last time the GOP had the majority.

The decision to formally punt comes as little surprise to many lawmakers, who had speculated that McCarthy might delay contested fights as a point of leverage as he works to lock down support. Still, many Republicans say they’re concerned that limbo could have lingering effects — particularly if the speaker’s election gets ugly and drags on past Jan. 3.

Rep. Dave Joyce of Ohio, for instance, raised the point in a recent closed-door meeting with his GOP colleagues, saying afterward: “These poor staffers, they’ve got mortgages too.”

Not to mention, if the speakership battle does extend beyond Jan. 3, government employees in the House who are enrolled in the 10-year student loan forgiveness program may face breaks in service, which can affect both retirement and whether they qualify for loan forgiveness. And if the speakership vote goes as long as the 15th, committee staff essentially lose their jobs and their pay.

McCarthy has publicly sidestepped questions on committee races, telling POLITICO last week that he had to check with his staff on the issue. And when he confirmed the delay Thursday, he pointed to a different reason for holding off — that the whole conference should have input: “We don’t have the freshmen up here and because of the timing, you got to have the freshmen and the whole conference to approve.”

Other GOP lawmakers, including McCarthy allies, say there’s another reason: He’s not looking to throw away one of his biggest chips in the speaker’s race.

“The speaker-elect will probably use that as a negotiating point,” Rep. Kevin Hern (R-Okla.), the incoming Republican Study Committee chair, said about delaying contested committee fights.

Some Republicans, like Virginia Rep. Morgan Griffith, a Freedom Caucus member, shrugged off the delay, saying that it’s “probably appropriate” to wait. That’s particularly true if someone other than McCarthy is ultimately elected speaker, he noted, given that “priorities may shift.”

But there are other major potential consequences if the gridlock over who will lead the GOP conference drags on, with Republican lawmakers losing time to make key hiring decisions through November and December amid the political headbutting.

House Republicans won’t be able to withdraw lawsuits filed under Democratic control that were overseen by current House counsel Doug Letter — because they won’t be able to hire his replacement. That means they can’t change the House’s formal positions on issues like the lawsuit against Donald Trump ally Stephen Bannon and others would remain in effect.

It also forces Republicans to hit pause on plans to launch their own investigations into everything from President Joe Biden’s son Hunter to Afghanistan. Republicans are threatening to fire off a flurry subpoenas, a move the leadership battle has paralyzed. Adding to the delay, committees also wouldn’t be able to call hearings or witnesses.

Incoming GOP chairs received an email this week stating that they won’t have key information on the makeup of their committees — including how many members or who they will be — until after the speaker’s race is settled. They were also told that they can’t hand out influential subcommittee gavels until January.

“It delays the committee process,” said incoming Oversight Committee Chair James Comer (R-Ky.), adding that if the speaker’s race gets dragged out: “We’re behind already.”

It’s not just contested committee fights that are being delayed. McCarthy, or whoever becomes speaker, gets to appoint the head of the House Rules Committee, which helps control the floor, and the Administration Committee, which oversees everything from Capitol security to mice infestations. The speaker also appoints all members to select committees like the House Intelligence Committee, putting those panels entirely in limbo.

Some lawmakers said the delay could amount to a party face plant and an embarrassment as the political drama consumed their ability to kick-start the GOP agenda, dubbed the Commitment to America. To make matters worse, they said, it comes after the party barely squeezed into the majority, citing a reluctance among voters to give them this opportunity in the first place.

The blame, according to many rank-and-file members, falls on the five members threatening to derail McCarthy’s bid for the gavel.

“Just populating your own committee and getting your stuff ready to go takes time. You’re in mid-term, you don’t have two years, you have six to eight months to move anything meaningful,” said Rep. Kelly Armstrong (R-N.D.). “That’s why this speaker fight is dumb. You can quote me on that.”

Democrats, meanwhile, will have assembled their leadership team, their top committee spots and their caucus rules by next week. But they, too, can’t determine their committee rosters until the GOP’s speaker is in place.

Rep. Tom Cole (R-Okla.), who has served 19 years in the House, said he would prefer a decision sooner “just for the preparation involved.” But the senior GOP appropriator backs McCarthy doing “whatever he needs to do to assemble the votes.”

“Nothing is going to be determined until we have the vote on Jan. 3, everything will be uncertain. So if there’s a delay, I blame the people who are putting that vote in doubt,” Cole said.