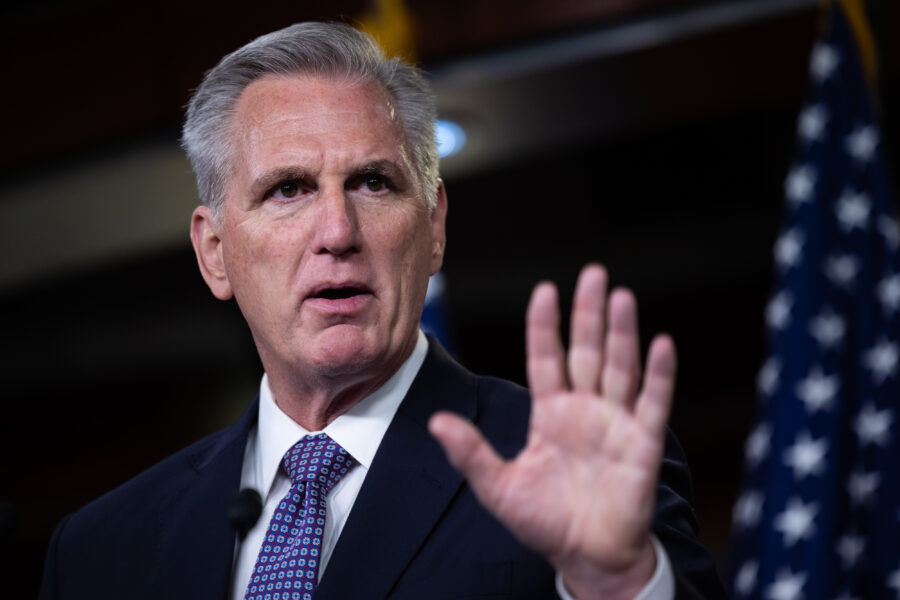 Kevin McCarthy is getting pulled into a new game with conservatives whose votes he needs next month to become speaker: “The Price is Right.”

At the heart of the House GOP leader’s latest battle of wits with his critics on the right is what’s known as the “motion to vacate the chair,” which allows members to force a vote on deposing a sitting speaker. The tool became notorious in 2015 when conservatives threatened to use it against then-Speaker John Boehner (R-Ohio), but outgoing Speaker Nancy Pelosi (D-Calif.) abolished it — and now McCarthy allies want its use severely restricted amid a fist-tight majority.

McCarthy’s camp hoped they had settled with the GOP conference’s conservatives on a deal requiring a majority of its members to support a motion to vacate. But the right price to rein in the California Republican’s rowdy detractors is likely going to be lower than that.

Which leaves McCarthy backers like Rep. Brian Fitzpatrick (R-Pa.) openly musing about how much to empower conservatives with the ability to “hijack or extort” their future leader.

“Congress can’t become a three-ring circus,” Fitzpatrick said of the debate over how high to set the number of House members required to force a vote on toppling a speaker. “There’s got to be law and order. It’s got to be a functioning institution.”

Some House Republicans say they see room for a compromise. In other words, McCarthy could allow less than a majority threshold to force a vote, but more than the roughly 30 members of the Donald Trump-aligned Freedom Caucus. The Freedom Caucus has splintered in its views on whether McCarthy should be speaker in next year’s Republican majority, with only some of the group taking part in negotiations on the motion to vacate.

One Freedom Caucus member who is trying to find middle ground with leadership, Rep. Andrew Clyde (R-Ga.), called the ability to vote on deposing a speaker “incredibly important,” given that the House leader “works for the members of Congress that elected” him or her.

“It’s part of what holds the most senior leadership in Congress accountable,” Clyde said of the motion to vacate the chair.

At the moment, the idea of a compromise number of Republicans who’d be required to force an anti-speaker vote is only a hypothetical. But McCarthy allies are quietly floating it as a possible offer to conservatives whose votes during the Jan. 3 speaker election aren’t locked in, according to three House Republicans who spoke candidly on condition of anonymity.

Some GOP lawmakers have indicated the price for a motion to vacate vote should be about one-third of the conference, or roughly 75 members, others have suggested the number 50.

No matter where the magic number lands, the purpose would be the same: Agreeing to it could help McCarthy pick up votes for speaker while protecting him with a high enough threshold that the Freedom Caucus couldn’t boot him on its own. That doesn’t mean every McCarthy backer wants him to play conservatives’ game, though — some are warning him not to give ground to a group they view as intent on derailing the future majority with needless drama.

When GOP lawmakers met behind closed doors to talk rules on Wednesday afternoon, a middle-ground offer on the motion to vacate did not come up, nor did McCarthy wade into the discussion as members made their respective arguments on the matter, according to three other House Republicans.

Three Republicans in the room, speaking on condition of anonymity, described the discussion as civil. Still, neither side claimed the meeting changed any minds, and some Republicans griped that they wouldn’t be having such discussions if they’d picked up more seats in the midterms.

Rep. Ralph Norman (R-S.C), one of five current public opponents of McCarthy, said one side views the speaker-toppling motion “like drowning everyone in gasoline” and giving all House Republicans a match, while others view it as a precedent that holds party leadership accountable to the rank and file.

According to one Republican in the room, the last 30 minutes of debate Wednesday centered on the motion to vacate but served largely as a forum for members to air their opinions.

Rep. Greg Murphy (R-N.C.) said he hopes the conference can reach a reasonable compromise but acknowledged that “I’m not sure it helps our cause” next year, given the party’s likely five-vote margin of control, “to have a minority basically control the [speakership].”

McCarthy called Wednesday’s meeting as he escalates his courtship of conservative critics. He and his allies are conducting a flurry of outreach, working to sound out all corners of the conference, including potential dissenters.

“My phone has rang more in the last two weeks than it has in the previous four years,” said Rep. Chip Roy (Texas), a Freedom Caucus member who hasn’t said how he’ll vote on Jan. 3.

But all those calls haven’t budged Roy on the motion to vacate, which he supports restoring to the days when any one member could force a vote on it: “Everybody’s all wrapped around the axle on this. It’s just a question of accountability.”

Freedom Caucus members are also publicly avoiding any embrace of a specific number for the anti-speaker vote, as well as any suggestion of clear red lines on other contentious conference issues.

The very discussion of a compromise on the motion to vacate is a shift from last month, when House Republicans voted in favor of conference rules that would have required a majority of GOP lawmakers to support one. That proposal, from incoming Intelligence Chair Mike Turner (R-Ohio), was seen as a win for McCarthy and his allies who thought they had defanged the Freedom Caucus on at least one major source of tension.

Asked Wednesday about changing the threshold again, McCarthy pointed back to the vote on Turner’s plan, as did his allies.

“I don’t see what would change” the binding nature of that vote to require a majority of the conference, said Rep. Dave Joyce (Ohio), who leads the Republican Governance Group. Some members of that more moderate group sported pins on Wednesday that read “O.K.,” an acronym indicating their support for “only Kevin.”

But talk about the motion to vacate kept percolating among Freedom Caucus members this month, indicating that McCarthy’s problems on that front weren’t quite over.

And McCarthy allies are making just as clear that plenty of forever-Kevin members are ready to go through multiple speakership ballots, wearing down their never-Kevin colleagues.

That means the House GOP is still, for now, barreling toward uncharted territory on the floor. And no matter what price conservatives may insist is right in exchange for their votes, it’s far from clear which side will concede the game first.

“I don’t care if it’s the first vote or the 50th vote. I’m voting for McCarthy,” said Rep. Kelly Armstrong (R-N.D.). “Anyone else who gets to 218 does it without me. North Dakota is closed for winter right now anyway. I have nowhere to be.”