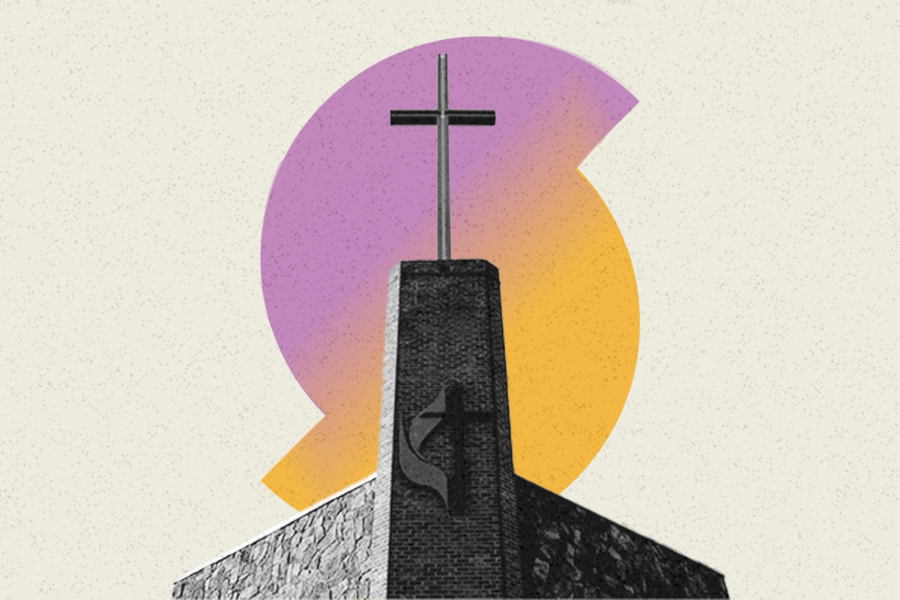 Last weekend, over 400 Methodist churches in Texas voted to leave their parent denomination, the United Methodist Church (UMC). Their decision followed the mass exodus of Methodist congregations in other Southern states, including North Carolina, Alabama, Louisiana, Georgia, Arkansas and Florida.

The departing congregations joined the more conservative Global Methodist Church over concerns that the UMC has grown too liberal on key cultural issues — most importantly, LGBTQ rights. They are part of a larger schism within other mainline Protestant denominations (namely, Episcopalians and Baptists), ostensibly over the propriety of same-sex marriage and the ordination of LGBTQ clergy, though in reality, over a broader array of cultural touchpoints involving sexuality, gender and religious pluralism.

At first blush, this might seem like an issue that’s peripheral to American politics — a purely religious matter. But it’s actually an indicator of just how fractured our politics have become. And if history is any indication, it’s about to get even worse.

The last major split in the church occurred in the 1840s, when the question of slavery opened a rift in America’s major evangelical denominations. For years, the churches had successfully contained debates over the propriety of slavery. Denominational leaders, clergymen and parishioners largely agreed to disagree. When the schism did finally come, many observers worried that the inability of the churches to maintain unity portended something far more serious. And they were right.

Amid handwringing over the current state of political polarization, it’s worth revisiting the religious crackup of the 1840s. The United States is not likely staring down the barrel at a second civil war, but in the past, when churches split over politics, it was a sign that country was fast coming apart at the seams.

In the early 19th century, most of the major evangelical denominations — Methodists, Baptists and Presbyterians — formally opposed the “buying and selling of men, women, and children,” in the words of the Methodist Book of Discipline, which from the church’s very inception in the 1790s took an unequivocal stance against slavery. The Presbyterian General Assembly echoed this sentiment in 1818 when it held “the voluntary enslaving of one part of the human race by another, as a gross violation of the most precious and sacred rights of human nature, as utterly inconsistent with the law of God.” Baptists, the largest denomination in the antebellum period, were a decentralized movement, but many local bodies similarly condemned slaveholding.

None of these positions aligned the churches with the immediate abolitionism that William Lloyd Garrison, the preeminent abolitionist newspaper editor, and his allies championed, but they placed the nation’s largest evangelical bodies squarely in the moderate antislavery camp — on paper, at least.

Conviction soon ran up against the practical need to placate slaveholders in the South and border states, as well as Southern transplants to the Midwest. Competing fiercely for new adherents, the major evangelical churches were loath to alienate current or prospective members. It was one matter to oppose slavery in official church documents. It was another to sanction slave owners or exclude them from Christian fellowship — a step that many churchgoers considered both counterintuitive to the project of saving souls and more likely to alienate than persuade slaveholders. Thus in 1836 the Presbyterian General Assembly rejected a resolution to censure slaveholders, reasoning that such a measure “would tend to distract and divide” Christians of good faith. The same year, the Methodist General Conference similarly voted down a proposal to sanction slaveholding church members and even took the additional step of formally denouncing two abolitionist ministers for agitating against slavery at the conference.

In these years, religious abolitionists, who represented a small minority of evangelical Christians, sometimes applied a “no fellowship with slaveholders” standard. If the churches would not expel slave owners, they would simply establish their own churches. A variety of “come-outer” sects broke away from the established evangelical churches in the 1830s and 1840s, believing, in the words of a convention that convened in 1851 in Putnam County, Illinois, that “the complete divorce of the church and of missions from national sins will form a new and glorious era in her history — the precursor of Millennial blessedness.” Prominent abolitionists including James Birney, who ran for president in 1840 and 1844 as the nominee of the Liberty Party — a small, single-issue party dedicated to abolition — William Lloyd Garrison and William Goodell, the author of Come-Outerism: The Duty of Secession from a Corrupt Church, openly encouraged Christians to leave their churches and make fellowship with like-minded opponents of slavery. Come-outers nevertheless represented a minuscule fraction of organized Christianity. In the end, breaking fellowship with their coreligionists was a step too far for all but a small number of deeply committed activists. Some churches were closer to the antislavery cause than others.

The first lightning bolt struck in 1837, when the Presbyterian church formally split between its New School and Old School factions. Technically the divide was over theological questions, with New School churches and synods adopting an “alleviated” form of Calvinism that rejected the harder tenets of predestination, while Old School Presbyterians retained a traditional Calvinist interpretation. Most of the nation’s New School Presbyterians, numbering roughly 100,000 communicants across 1,200 churches, lived in Northern states. The Old School, with roughly 127,000 members and 1,763 churches, was not strictly a Southern religious movement; it enjoyed pockets of strength in Pennsylvania and New Jersey. Contemporaries nevertheless believed that the controversy over slavery was firmly behind the rupture. A year before the formal divorce, delegates to the General Assembly held separate caucuses — one in the North, one in the South. A Southern delegate observed that “it is the prevalent opinion among southerners that we are to be unchurched by a considerable majority. If so, we can retire south of Mason’s and Dixon’s line and … dwell in peace and harmony.” The Cincinnati Journal and Luminary, a religious publication that closely followed the Presbyterian schism, concluded that the “question is not between the new and the old school — is not in relation to doctrinal errors; but it is slavery and anti-slavery. It is not the [Westminster] standards which were to be protected, but the system of slavery.”

Discord over slavery soon spread to the other major denominations. In 1844 the General Conference of the Methodist Episcopal Church convened in New York for its annual meeting. A year earlier, dozens of Northern congregations representing roughly 6,000 members broke with their parent church over its toleration of slavery, forming the come-outer Wesleyan Methodist Church. Recognizing the possibility of further defections, church officials hoped to gesture at their opposition to slavery without fully antagonizing white Southern coreligionists.

The test came when the conference confronted the case of James O. Andrew, a bishop from Georgia who “became connected with slavery” when his first wife died, leaving him in possession of two enslaved people whom she’d owned. The matter was compounded when Andrew’s second wife inherited several enslaved people from her late husband. Bishop Andrew signed legal documents forswearing a property relationship to his second wife’s slaves, but his antislavery peers would have nothing of it, hoping to force the issue at the General Conference.

By a vote of 110 to 68, the assembly deemed that Andrew’s “connection” with slavery would “greatly embarrass the exercise of his office … if not in some places entirely prevent it” and found that he should step aside “so long as this impediment remains.” In response, Southern Methodists withdrew from the church and formed their own denomination, the Methodist Episcopal Church, South. “The division of the Methodist Church will demonstrate … that Southern forbearance has its limits,” wrote a slave owner for the Southern Christian Advocate, “and that a vigorous and united resistance will be made at all costs, to the spread of the pseudo-religious phrenzy called abolitionism.”

Leaders on both sides negotiated an equitable distribution of assets and went their separate ways. Peter Cartwright, a Methodist minister and politician who would run unsuccessfully against Abraham Lincoln for Congress two years later, was present at the conference. “I knew, if the Southern preachers failed to carry the point they had fixed, namely, the tolerance of slaveholding in episcopacy, that they would fly the track, and set up for themselves,” he later recalled. “And I the more deeply regretted it because any abomination sanctioned by the priesthood, would take a firmer hold on the country, and that this very circumstance would the longer perpetuate the evil of slavery, and perhaps would be the entering wedge to the dissolution of our glorious Union; and perhaps the downfall of this great republic.”

Baptists experienced a similar schism, one that resulted in a permanent split between the movement’s northern and southern congregations. Meeting in New York in 1840, leaders of the American Baptist Anti-Slavery Convention warned that “we cannot and we dare not recognize you as consistent brethren in Christ … and we cannot at the Lord’s table, cordially take that as a brother’s hand, which plies the scourge on woman’s naked flesh, — which thrusts a gag in the mouth of a man, — which rivets fetters on the innocent, — and which shuts the Bible from human eyes.” Southern Baptists, ever sensitive to the moral judgment of non-slaveholders, took offense at “aspersions upon their character” and, despite hand-wringing over the political consequences of disunion within the church, made good on their threat to cut off ties with their Northern churchmen. In 1845 they withdrew and formed the Southern Baptist Convention.

Ironically, these schisms freed Northern Protestants from the necessity of placating their Southern brothers and sisters. In the 1850s, as slavery came to the forefront of national politics, many Northern congregations and lay organizations passed resolutions excluding slave owners from their fellowship and denouncing as sinners those who held slaves. Such activity was more prevalent in New England and northern parts of the Midwest. Border states and the lower Midwest remained Southern in origin and more closely tied to the institution of slavery. In effect, events in the 1850s — from the passage of the Fugitive Slave Act of 1850 to the Kansas-Nebraska Act of 1854, which effectively abrogated the Missouri Compromise and opened the western territories to slavery — radicalized Northern Christians in a way that few abolitionists could have predicted just 10 years earlier.

The parallel between then and now is not a perfect one. Two hundred years ago, organized Protestant churches were arguably the most influential public institutions in the United States. On the eve of the Civil War, the number of active Methodist clergymen roughly equaled the number of postal workers nationwide (a significant benchmark, as before the war, the post office was the largest federal agency and the branch through which most Americans experienced a direct relationship with the federal government). By some estimates, the total receipts of all churches and religious organizations were almost equal to the federal government’s annual revenue. Among the country’s roughly 400 colleges, almost every last one was affiliated with a church.

That’s no longer the case. Mainline Protestant churches have long been on a steep decline in the U.S., as has religious observance and identity more broadly. In the 1840s, mainline denominations were the most important building block of civil society; their breakdown was therefore far more portentous than is the case today.

But the example is telling, nevertheless. For decades, the churches had proven deft — too deft — at absorbing the political and social debate over slavery. Their inability to maintain that peace was a sign that the country had grown dangerously divided.

Today, mainline churches are bucking under the strain of debates over sex, gender and culture that reflect America’s deep partisan and ideological divide. In a country with a shrinking center, even bonds of religious fellowship seem too brittle to endure. If history is any guide, it’s a sign of sharper polarization to come.