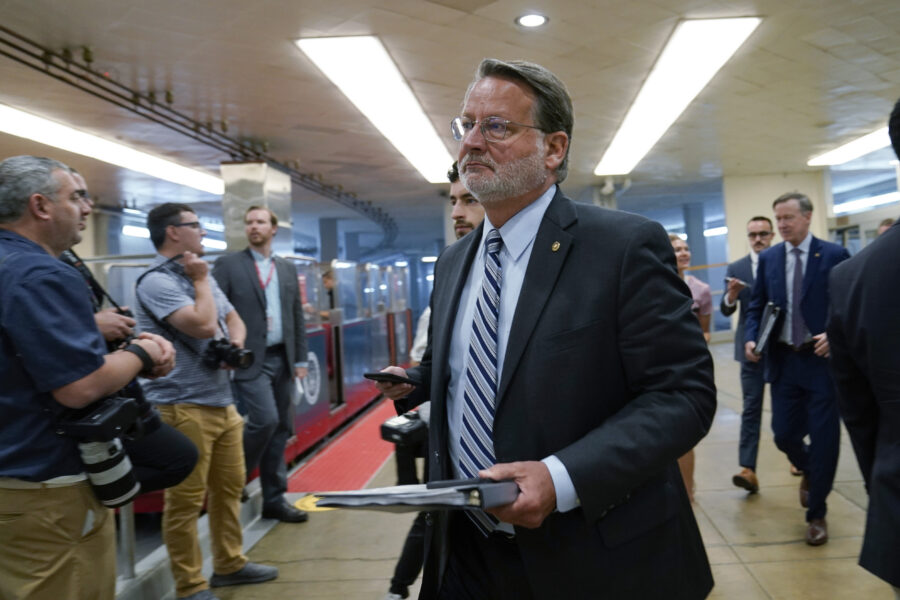 Democrats are urging Gary Peters to stay at the helm of their Senate campaign arm after the party pulled off the historic feat of reelecting every incumbent this midterm. He’s not, however, rushing to do it all again.

Once mocked by the GOP as an unknown named “Jerry,” Peters took his own low-key bow after Sen. Raphael Warnock (D-Ga.) prevailed in Tuesday’s runoff, saying of his Democratic Senatorial Campaign Committee chairmanship: “I enjoyed it more than I thought I would.”

The Michigander acknowledged that “a lot” of fellow senators have encouraged him to lead their campaign efforts again in 2024, when Democrats face a much tougher map, but he openly demurred when asked about the prospect of another two years in the “big job” of DSCC chair: “I’m still celebrating today.”

The 2022 campaign cycle marked the first time since 1934 that the Democratic Party did not lose any Senate seats in a midterm while holding the White House. But it’s not just Peters’ success at the campaign committee, which he steered to focus heavily on its ground operation, that has his party wanting him back. It’s also unclear who else would step up if the current chair doesn’t — and Democrats need a proven performer as they prepare to defend 23 seats in two years, from red states to battlegrounds.

Prepared for the job by tough House and Senate reelections he’s personally faced in Michigan, Peters said he received “a lot of freedom” from Senate Majority Leader Chuck Schumer to run the DSCC his way. And Peters brought his own style to the job, setting up a point system that rewarded Democratic senators for how much they helped in races, from making phone calls to participating in candidate events.

“If you did the work, you got some cupcakes,” said Sen. Jon Tester (D-Mont.), a former chair of the caucus campaign arm who is up in 2024. “I did not keep a tally of the points, so I don’t know if he was just screwing with you or not.”

And while Schumer has yet to announce who he’ll pick to run DSCC in 2024, Peters’ colleagues aren’t shy about plugging him again.

Sen. Mark Kelly (D-Ariz.), who won reelection this cycle, said Peters “should do it again.” Tester said “damn right” Peters should remain for another term and that he’s told his friend as much.

“I said ‘Gary, you just finally got it down. You should do it for another,’” Tester recalled. Peters’ reply, he added, was “probably not.”

Peters said in an interview that he remained confident throughout the cycle that Democrats would hold all their seats. This fall’s Senate map came down to Pennsylvania, Georgia, Arizona, New Hampshire and Nevada — all states that President Joe Biden won in 2020, albeit narrowly.

Ultimately Democrats expanded their majority on the strength of the Keystone State, where Sen.-elect John Fetterman won retiring GOP Sen. Pat Toomey’s seat. Wisconsin was one state that stayed red despite Biden winning it in 2020.

Though Peters had optimistically predicted Senate Democrats would pick up two seats this cycle, he said he stayed cautious throughout the midterms — even as Democrats saw a boost this summer in the aftermath of the Roe v. Wade reversal and the Jan. 6 select committee hearings.

“The numbers started to get much better for us, and I never believed it,” Peters said.

Senate Republicans, who are undergoing their own internal reckoning after an unsuccessful midterm, aren’t exactly ready to credit Peters for their defeat.

“He’s a lucky guy,” said Sen. John Cornyn (R-Texas), a former chair of the National Republican Senatorial Committee. “They obviously did something right, but I think it was more being lucky than anything else … It’s a confluence of circumstances.”

Among the circumstances Cornyn cited in explaining Peters’ success were the nationalization of campaigns, Democratic candidates outraising Republican counterparts and GOP candidates’ inability to pivot to a general election.

Peters wasn’t having it, instead attributing Democratic victories to candidate quality, campaigns that focused on home-state issues and voter concern about abortion rights.

“The Republicans were not running on any issues. They were simply highlighting problems that people already know they have,” Peters said. “Maybe I was lucky the Republicans were less competent than they should have been. But then, we ran strong campaigns.”

The Michigan Democrat isn’t up for reelection until 2026 after winning his last race by just 1.7 points. He was the only newly elected Democratic senator in 2014, when Republicans took the majority, under former President Barack Obama.

Given those tight races, perhaps, Peters observed that running the DSCC was better than being a candidate.

And as Warnock’s victory puts an end to the longest 50-50 Senate in history, Peters himself will benefit from the newly expanded Democratic majority as chair of the Homeland Security and Governmental Affairs Committee. Work on that panel will become his main focus, he said.

“With the extra member [seated on the committee], it makes that job even more important,” Peters said. “Having enhanced subpoena powers is going to be a big deal, as well as moving nominations … This will allow us to do that a whole lot more efficiently.”