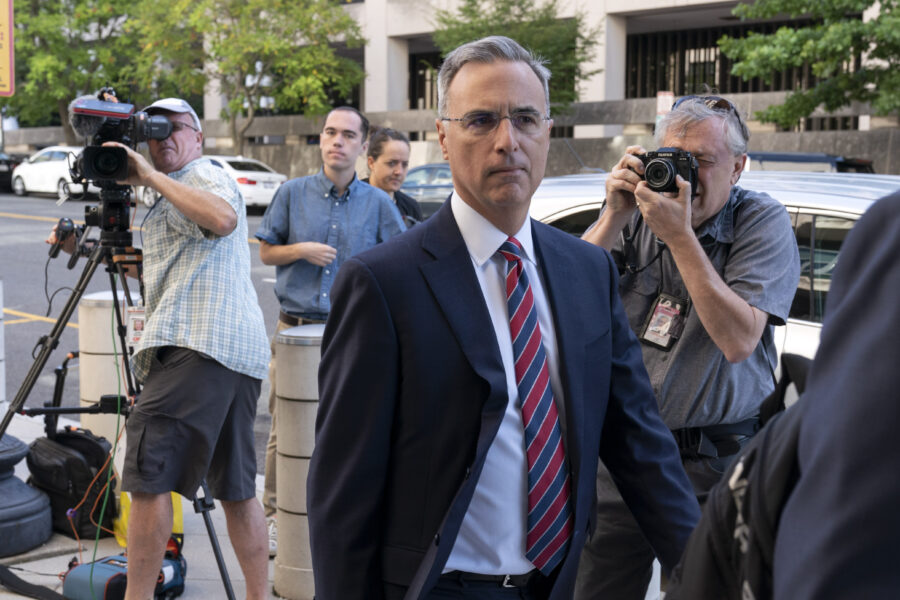 It’s unclear precisely which investigation the pair were testifying about. Cipollone and Philbin have insight about Trump’s machinations ahead of Jan. 6, when he attempted to subvert his defeat in the 2020 election and seize a second term. But they were also both present in the final days of Trump’s White House as boxes of documents — including highly sensitive national security secrets — were packed and shipped to Trump’s Mar-a-Lago estate.

Both matters are the subject of criminal inquiries that are being considered by grand jurors in Washington D.C.

For Trump, Cipollone’s appearance marks the latest setback in an extraordinary run of catastrophic legal and political developments.

It came a day after a federal appeals court panel threw out his lawsuit against the Justice Department following the FBI search of his Mar-a-Lago estate. In recent days, Trump has seen top allies Lindsey Graham, Mark Meadows and Michael Flynn ordered to testify to an Atlanta-area grand jury investigating his efforts to overturn the election.

On top of those legal woes, the Supreme Court cleared the way for House Democrats to obtain six years of Trump’s tax returns.

And Trump-world has been reeling in recent days amid widespread condemnation from allies and adversaries alike for hosting white supremacist Nick Fuentes at his Mar-a-Lago estate.

Trump has also been on the losing end of asecret court battle to prevent some of his top ex-advisers from testifying to the grand jury, which may have cleared the way for Cipollone and Philbin to appear Friday.

Cipollone was a key witness to Trump’s frenzied final weeks in office, particularly as the outgoing president sought to undermine the transfer of power to Joe Biden. Cipollone testified to the Jan. 6 select committee after protracted negotiations but declined to discuss matters he viewed as covered by potential executive privilege.

If Cipollone was ordered to testify about those privileged matters to the grand jury, it would put prosecutors in possession of key evidence that lawmakers on the Jan. 6 panel were unable to obtain. Among the questions the select committee was unable to resolve, for example is why Cipollone did not attend a key final meeting about Trump’s effort to persuade Pence to disrupt the Jan. 6 counting of electoral votes.

Cipollone told the select committee he had planned to attend but ultimately did not. The reason, he said, was protected by privilege.

The day before he left office, Trump also designated Cipollone and Philbin as two of seven representatives to the National Archives, authorized to facilitate access to and manage his presidential records.

Other top White House lawyers to have made appearances in the same courthouse include Bruce Lindsey, a longtime adviser to President Bill Clinton. Clinton’s White House fought an unsuccessful court battle to block Lindsey’s testimony in an independent counsel probe into alleged corruption at the Agriculture Department.

Lindsey was later called to testify before a grand jury overseen by another independent counsel, Ken Starr, as it looked into Clinton’s relationship with Monica Lewinsky.