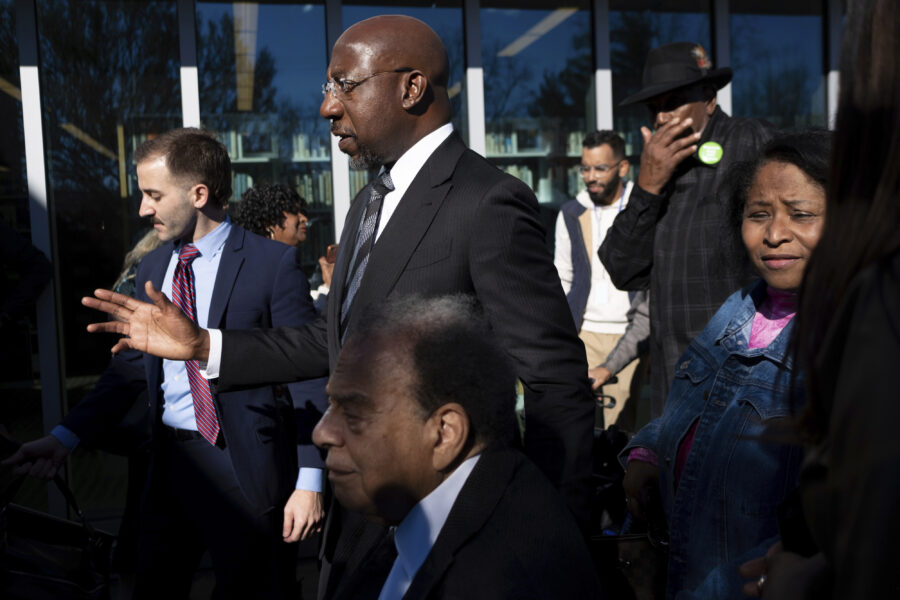 More than 1 million people have voted early in the Georgia runoff between Democratic Sen. Raphael Warnock and Republican challenger Herschel Walker — a sign of strong turnout ahead of Tuesday’s contest.

Nothing about early vote numbers guarantees an election outcome, with millions more eligible to vote in-person on Tuesday. And there are still votes being cast today, the last day of early in-person voting, while absentee ballots can also be returned through Election Day. But there are several key themes that have emerged as Georgians trudged back to the polls just weeks after an intense midterm campaign ended everywhere else in the country.

Spurred by a condensed runoff period, early voting totals have set records, and it has been especially strong in heavily Black parts of the state and Democratic strongholds. The high turnout suggests that Election Day voting will once again be busy in the state, though it’s hard to estimate exactly where turnout will end up Tuesday night.

It is the second consecutive runoff for Warnock, who won his seat in a January 2021 special election over then-Sen. Kelly Loeffler. That victory, coupled with Sen. Jon Ossoff’s win on the same day, gave Democrats control of the Senate for the past two years.

This time, the runoff is taking place earlier — and the stakes are slightly lower. Democrats already have control of the Senate after flipping a seat in Pennsylvania last month, but holding onto Warnock’s seat would give them more flexibility with 51 votes. It would also provide more of a cushion for 2024, when Democrats have to defend a number of red-state Senate seats.

Here’s where the early vote stands days before the runoff.

The beginning of the week posted two of the highest daily early-voting totals ever seen in the state, with over 303,000 in-person ballots cast on each Monday and Tuesday.

The large numbers may reflect more than voters’ eagerness to get to the polls — specifically, the condensed voting period. There was mandated early voting in all counties from Monday through Friday of this week, although a handful of counties offered early voting last weekend. For the runoff following the 2020 election, early voting lasted around two weeks.

Throughout the week, wait times at some polling locations exceeded two hours, especially in metro areas.

“You could celebrate it,” said Michael McDonald, an early voting expert at the University of Florida who runs the United States Elections Project, of the turnout records. “Or you could be concerned because the long lines may deter some people from voting.”

Georgia Secretary of State Brad Raffensperger, a Republican who was reelected in November, took the first option: “The largest Early Voting Day in Georgia history shows that claims of voter suppression in Georgia are conspiracy theories no more valid than Bigfoot,” Raffensperger said in a statement.

A variety of factors — a shorter early voting period, it being a midterm year and having just one Senate election on the ballot — makes it difficult to compare turnout to the most recent runoff election. When the last midterm runoff was held in 2018, also four weeks after the November election, over 373,000 voted early. But that was a significantly lower-profile race, with only the secretary of state and a local Public Service Commission role on the runoff ballot.

Turnout has been higher in Democratic strongholds, and among Black voters

Voters in Democratic strongholds had a head start after a court ruled that counties could offer Saturday voting this past weekend, following a lawsuit from Warnock’s campaign and Democratic allies. The places that took it up were mostly in Atlanta and its suburbs. That gave voters in these areas, who largely favor Democrats, a chance to cast their ballots sooner.

Democrats have largely kept up that momentum, with Black voters — a key component of the party’s base in Georgia — making up a greater share of the early electorate compared to what early turnout looked like before the November election.

During the November election, the incumbent Democrat won the early vote while Walker won the Election Day vote. But margins matter.

“I think Sen. Warnock is building himself a pretty formidable lead right now as we speak,” Couvillon said.

The counties Walker won that brought him the largest number of votes — Cherokee, Forsyth and Hall counties — have seen some of the highest turnout numbers so far in early voting. Still, they lag behind turnout numbers in Fulton, Dekalb, Cobb and Gwinnett, where Warnock won in the general election.

Of the counties Walker won, Forsyth has the highest early-vote turnout, with 25.2 percent. In the general election, the county had a turnout of 63.3 percent. Throughout the cycle, some national Republicans have pushed for the base to vote on Election Day. If that trend holds, GOP turnout would look very different on Tuesday.

Despite the records set in the early days, total early voting ahead of the runoff sits at 1.4 million through Thursday, compared to more than 2.2 million Georgia voters who cast their ballots early ahead of the November election. (That early voting period lasted over two weeks.)

Turnout has tapered down in the latter half of the week, hovering just below 300,000 votes each on Wednesday and Thursday.

During the November election, 58 percent of Georgia voters cast their ballots via in-person early voting compared to 36 percent on Election Day. The final 6 percent voted absentee by mail.

The condensed early voting period could mean that a greater share of votes come on Election Day, when Walker got the bulk of his support in November. But it could also be an indicator of lower overall turnout, with Dec. 6 unlikely to have the same draw as a typical Election Day.