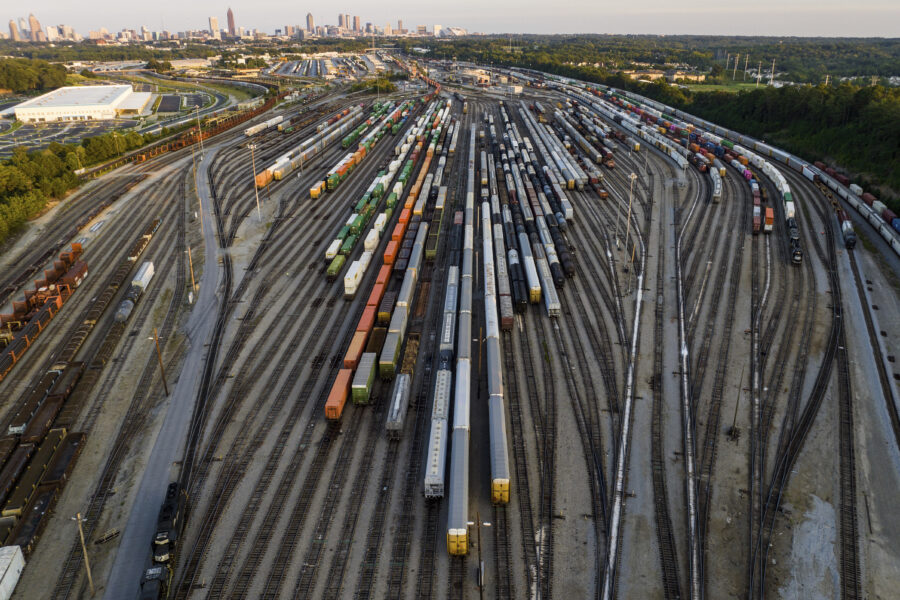 A House-passed bill to head off a nationwide freight rail strike faces an uncertain future in the Senate — just days before the threatened work stoppage is likely to begin affecting the economy.

The bill, which still needs a vote in the Senate, would impose a labor contract opposed by tens of thousands of unionized workers. It is meant to prevent a freight shutdown that the railroads say would cost the U.S. an estimated $2 billion per day, but the contract doesn’t address sick leave policies, a disappointment for unions that form one of Democrats’ core constituencies.

The House passed two separate bills Wednesday — one to codify the tentative contract agreement over the objections of unions that voted against it, and a second to add seven paid sick days to the contract.

But on Wednesday evening, Republican positions on the legislation were widely divergent. If Democrats call a vote it will require 10 GOP yes votes joined by every Democrat. Sens. Marco Rubio (R-Fla.) and Ted Cruz (R-Texas) said they will oppose the contract agreement but are not sure if they will support more paid leave for rail workers. Rubio also floated an amendment to buy more time for negotiations.

“It depends on what the workers support and what they’re asking for, and whether it meets that criteria,” Rubio said. “The ideal outcome here is they renegotiate this thing in a way that workers can vote for.”

Senate Democrats expressed for resolving the issue this week, but a time agreement was not announced as of Wednesday afternoon.

“We need to make sure there is paid leave in any agreement that we’re going to force on workers,” said Sen. Elizabeth Warren (D-Mass.) “We should be doing it now, there’s no reason for delay. Everybody’s had a chance to look at the agreement, we know what the agreement is, we need to vote up or down.”

The House bill to impose the overall contract, H.J.Res 100, passed 290-137. Despite broad support, a handful of senators from both parties have said they will oppose the bill, a development that could delay final Senate approval for days. But the clock is ticking, and impacts of a potential rail shutdown will start being felt as soon as this weekend.

The House also passed, 221-207, the sick days bill, H.Con.Res 119, as a way to appease progressive Democrats who chafed at voting for a rail contract that was less than what workers wanted. Separating the bills also is a nod to the realities of the Senate, where the sick leave bill is certain to fail.

Only three House Republicans supported the leave bill, a signal that it will be tough to get 10 Republican senators on board before train traffic starts coming to a halt in anticipation of a Dec. 9 work stoppage.

Congressional Progressive Caucus Chair Pramila Jayapal (D-Wash.) said in a statement that the paid sick leave vote was added to the floor schedule after conversations between House leadership, progressives and Transportation Chair Peter DeFazio (D-Ore.). Jayapal said any House-passed legislation on the contract agreement “will be accompanied by legislation that addresses the workers’ long standing demand for fair paid leave.”

DeFazio said both parties are no closer to a solution on paid sick leave than they were three years ago, which forced congressional action.

“I will proudly vote to lock in the tentative agreements and provide railroaders seven paid sick days,” DeFazio said in a statement. “The CEO’s can take a shift in the rail yard to cover them.”

Action now turns to the Senate, where Majority Leader Chuck Schumer and Minority Leader Mitch McConnell are trying to corral their caucuses toward a vote. Time is of the essence because though rail workers will stay on the job until Dec. 9, certain hazardous materials are likely to start being sidelined over the weekend to avoid being stranded.

Twelve Democratic senators released a statement after the House votes calling for swift passage of both bills, but one senator could slow down the process.

The freight railroads estimate that a shutdown would cost $2 billion per day. A stoppage would imperil supplies for critical resources such as clean drinking water and force long-distance passenger trains and commuter trains off the tracks because they mostly run on freight rails.

Both Schumer and McConnell have said they support quick passage of a bill that would impose a contract and end the stalemate.

But some senators from both parties have said they plan to object. Sen. Bernie Sanders (I-Vt.) said he will insist on a roll call vote for the sick leave bill, while some Republicans such as Rubio said they will vote against legislation that some rail workers do not support.

Other Republicans have also criticized President Joe Biden, who helped negotiate the tentative contract agreement in September, for moving forward with an agreement that did not have the support of some rank-and-file union members.

Because of Senate procedure, one senator can slow the process down and force leadership to hold a series of long procedural votes to make any progress, even though most senators from both parties support legislation that would head off a rail shutdown.

Labor Secretary Marty Walsh will address Democratic senators on Thursday to explain “why this is the path forward,” Sen. Gary Peters (D-Mich.) said. Transportation Secretary Pete Buttigieg is also expected to address senators, according to an aide.

Rail worker unions and rail operators have been bargaining for years on a labor agreement, with major sticking points around paid sick leave, on-call policies and time off. Workers won significant pay raises and other victories in the tentative deal but paid sick leave was not one of them.

If the tentative agreement passes the Senate and becomes law without the sick leave bill also passing, it means changes to sick leave policy that workers support will have to wait, or be addressed by Congress at a later date.