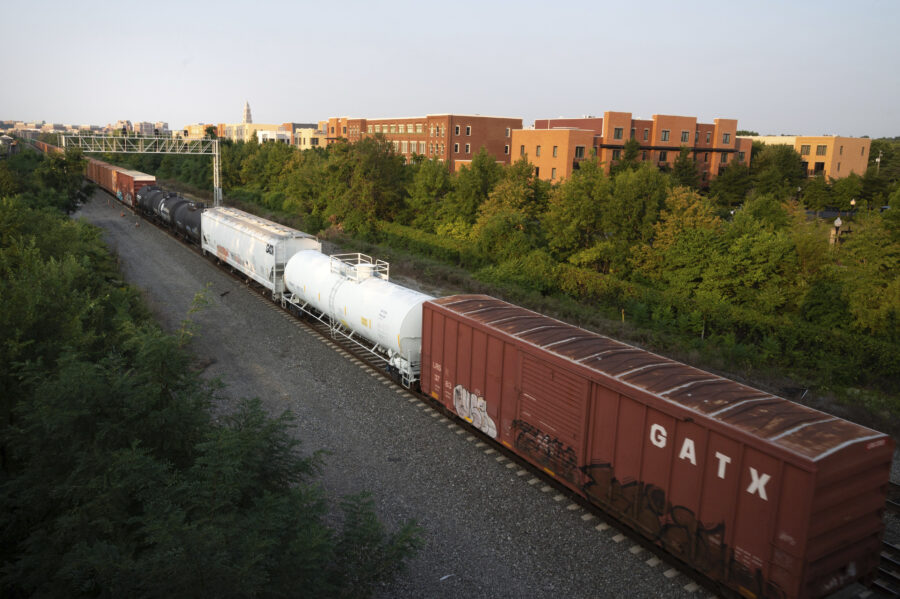 House progressives forced Democratic leaders to boost paid leave for railroad workers before agreeing to avert a potentially disastrous strike. They may end up with little more than a symbolic win.

The compromise arranged between Speaker Nancy Pelosi’s leadership team and an emboldened left hinged on a seemingly elegant solution to avoid a rail strike: House members voted on both the base labor agreement and a separate bill adding seven days of paid sick leave to it. When the two-part arrangement smoothed the way for final passage amid a chaotic negotiating scramble between Congress and the White House, it appeared to satisfy the restive liberal wing of a soon-to-expire House Democratic majority.

The party needs at least 10 GOP votes and all 50 Democrats in that chamber to pass anything on the rail strike — a supremely difficult task at the moment, both on the paid-leave front and maybe even for the labor agreement itself.

“I was told that Democrats were going to keep it clean,” said Mississippi Sen. Roger Wicker, the top Republican on the Commerce Committee. “If the president wants to try to play some game and have it both ways, then there’s going to be some resistance.”

When President Joe Biden asked that Pelosi and Senate Majority Leader Chuck Schumer move to avert the freight rail strike looming on Dec. 9, he handed their party a tough choice between economic calamity and offending union allies. And the compromise that the House passed only happened after a flurry of consultations with progressives, according to four people familiar with the situation.

House liberals made clear they wanted the paid leave provisions added to the agreement, offering an amendment on Tuesday sponsored by Rep. Jamaal Bowman (D-N.Y.). Rep. Ilhan Omar (D-Minn.) said they were “in constant communication, both with leadership, the White House and the Senate” during those deliberations.

By Tuesday, even centrists like Rep. Susan Wild (D-Pa.) and Sen. John Hickenlooper (D-Colo.) were openly warning Democrats not to stiff-arm railroad unions by leaving out their requests for more paid sick leave.

“There’s no question that we cannot have a rail strike,” Wild said in an interview. “That may be the most bipartisan sentiment we’ve had in a long time. Having said that, I’m still concerned about the sick leave, as a very strong pro-labor member of Congress.”

In the Senate, though, Democrats aren’t sure how they will handle the issue with a rapidly ticking clock and possibly calamitous effects on the holiday season. Sen. Joe Manchin (D-W.Va.) hasn’t decided how he will vote on the sick leave proposal, while Sen. Jon Tester (D-Mont.) said that he was leaning toward supporting it.

GOP leaders said they don’t know exactly where their members’ votes are either, given lingering uncertainty about when and on what the Senate will be voting. Sen. John Cornyn (R-Texas) predicted the paid leave provision would fall short of 10 GOP votes needed to break a filibuster, and at the moment it doesn’t appear there are any firm Republican votes in support.

On Thursday the administration will dispatch Transportation Secretary Pete Buttigieg and Labor Secretary Marty Walsh to Capitol Hill to huddle with Senate Democrats on the path forward. Then it will be up to Schumer to figure out how to sidestep an economically disruptive strike while satisfying members who want paid leave included in the agreement.

“Chuck’s got a lot of shit on his table right now. But this is a big one. Hopefully there’s a plan to move forward in a way that makes sense,” Tester said. “The rail shutdown, that would be disastrous. But you want to treat people fairly.”

Right now most senators expect they will vote on the paid leave provision, and if it fails that they will then likely try to pass the base agreement bemoaned by progressives and rejected by some unions. Sen. Elizabeth Warren (D-Mass.) said that “we’re gonna get to vote on adding paid leave to any deal that we push on the parties. It’s going to be a good thing.”

Schumer’s Wednesday afternoon effort to call up both House bills at a 60-vote threshold has been unsuccessful so far.

Rep. Alexandria Ocasio-Cortez (D-N.Y.), who’d pushed for inclusion of the paid leave provisions, said Democrats could turn the vote “into a win.”

“We’re fighting tooth and nail to include an amendment that gets these workers their paid sick days. And I think if we end up passing this with paid sick days, this will end up having been a good decision,” she said of the House’s procedural move.

Negotiations between union leaders and the railroads were essentially at a standstill in recent weeks — daily Zoom calls between the parties were scheduled for an hour but rarely exceeded 15 minutes, according to union leaders. Lawmakers and union officials said railroads were not willing to offer more days of paid sick leave, and rank-and-file union members began preparing for a work stoppage on Dec. 9.

Which leaves the Senate with little time to maneuver: Rail workers are set to strike next week if an agreement is not reached. And without unanimous consent, it could take several days to steer the legislation through the Senate. So if the paid leave provision falls, senators might be left with a zero-sum choice: Force through the deal without paid leave, or allow a strike that lets unions keep fighting for a different agreement.

Given the economic risk of a rail shutdown ahead of the Christmas holiday, that means congressional progressives may have to swallow the temporary symbolic win of House approval for a paid leave boost that doesn’t survive the Senate.

“That’s the most painful part of this: The idea that a worker could be terminated for doing exactly the most responsible thing, which is taking care of their health,” said Sen. Tammy Baldwin (D-Wis.). On the other hand, she said, “a rail shutdown will be so detrimental to the farmers I represent.”

Already the episode is rattling relationships between Democrats and labor, with Biden pushing to prevent a strike even as he positions himself as the most pro-union president in decades.

And some conservatives are taking the opportunity for their own flirtation with working-class heroism.

Sens. Marco Rubio (R-Fla.), Ted Cruz (R-Texas) and Josh Hawley (R-Mo.) were noncommittal on the paid leave provision on Wednesday, but both said they oppose forcing workers to accept the underlying agreement. Labor stalwart Sen. Sherrod Brown (D-Ohio) cited their stance in vowing not to accept the elimination of paid leave until he’s sure the GOP won’t cough up the votes.

“Marco Rubio’s the populist — they’re there, man. They want to help workers,” Brown quipped of Republicans in his trademark deadpan. “They’re, like, the Trotskyite party.”