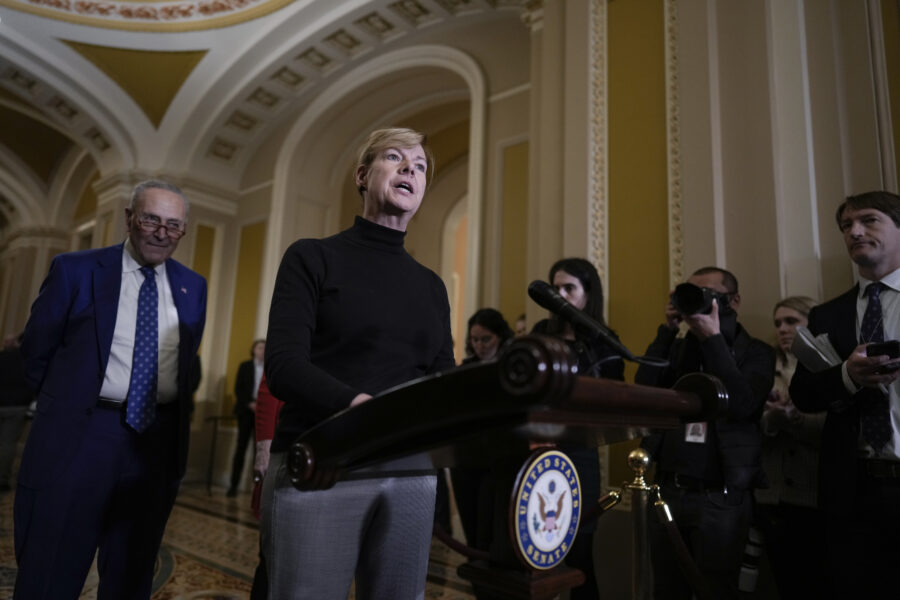 Senators spent months negotiating adding language to the bill related to religious liberty, a bid to attract the necessary 10 GOP votes to break a filibuster. The legislation still needs to clear the House, a likely easy lift since a previous version was approved by nearly 50 House Republicans and all Democrats.

A total of 12 Republicans voted with all Democrats in support of the bill. House Majority Leader Steny Hoyer indicated Tuesday that the House would take up the Senate version as soon as next week.

The legislation, led by Sens. Tammy Baldwin (D-Wis.), Susan Collins (R-Maine), Rob Portman (R-Ohio), Kyrsten Sinema (D-Ariz.) and Thom Tillis (R-N.C.), would ensure that the federal government recognizes a same-sex marriage, as well as interracial marriage, even if a couple moves to a state that doesn’t do so. In addition, the bill would repeal the Defense of Marriage Act, which defined marriage as between a man and a woman and passed the Senate by an overwhelming margin in 1996.

“This is something that many people in the LGBT community would not have expected just a decade ago, it really shows how much has changed in our country, this is a really historic milestone,” Sinema said in an interview. “It builds off of years and years of work of folks who have been talking for decades about ensuring that all couples have the same protections and also making sure that we’re respecting all Americans’ religious freedoms.”

Before Thanksgiving, a total of 12 Senate Republicans supported advancing the legislation, after negotiators included language in the bill that stated it would not impact provisions from a 1993 religious freedom law. That law prohibits the government from placing a substantial burden on an individual’s right to religious liberty. The bill also clarifies that non-profit religious groups would not see their tax treatment change and would not have to perform marriage services. Those changes won the backing of the Church of Jesus Christ of Latter-day Saints.

Although the Supreme Court guaranteed the right to same-sex marriage in 2015, proponents of the bill argue that the legislation will provide more certainty to same-sex and interracial couples. Democratic lawmakers were particularly keen to act after Supreme Court Justice Clarence Thomas’ concurring opinion in Dobbs questioned the Court’s previous rulings, including on same-sex marriage.

Republican opponents to the legislation argue that it’s unnecessary given there’s no case challenging the 2015 ruling. And some argue that the religious liberty protections in the negotiated Senate bill don’t go far enough.

Sen. Cynthia Lummis (R-Wyo.) said in a floor speech Tuesday that since voting to advance the legislation, her days have “involved a painful exercise in accepting admonishment, and fairly brutal self soul-searching.”

“These are turbulent times for our nation. Americans address each other in more crude and cruel terms than ever in my lifetime,” Lummis said. “For the sake of our nation today and its survival, we do well by taking this step — not embracing or validating each other’s devoutly held views but by the simple act of tolerating them.”

Lankford in a floor speech said he still had “major concerns” and listed religious organizations that opposed the same-sex marriage bill, including Concerned Women for America, the Alliance Defending Freedom and the Family Research Council.

The House passed its own legislation to protect same-sex marriage in July. Senate Majority Leader Chuck Schumer, rather than take it up immediately, had acquiesced to Senate GOP requests to delay the vote until after the midterm elections.

“I made the decision to take the risk and to wait,” Schumer said in a floor speech. “Today we have vindication the wait was well worth it.”