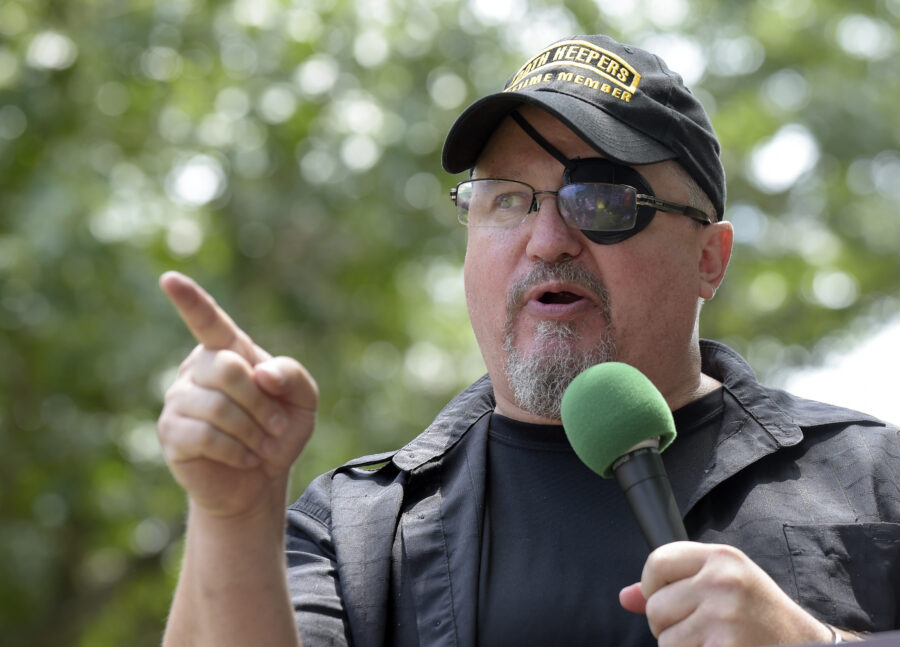 A jury on Tuesday convicted Oath Keepers founder Stewart Rhodes of masterminding a plot to violently subvert the transfer of power from Donald Trump to Joe Biden, finding that Rhodes entered into a seditious conspiracy against the U.S. government.

The jury also convicted Rhodes ally Kelly Meggs, leader of the Florida Oath Keepers, of seditious conspiracy. But the jury acquitted three co-defendants — Jessica Watkins, Kenneth Harrelson and Thomas Caldwell — of joining Rhodes in that conspiracy. All five, however, were convicted on additional felony charges, including obstruction of Congress.

Rhodes’ conviction is the most significant to emerge from the Justice Department’s sprawling investigation of the Jan. 6, 2021, attack on the Capitol, when dozens of Oath Keepers joined the mob that stormed the building and chased Congress, as well as then-Vice President Mike Pence, into hiding.

Attorney General Merrick Garland hailed the jury’s decision as an important part of the process of imposing consequences on those who sought to block the certification of the election almost two years ago.

“Today the jury returned a verdict convicting all defendants of criminal conduct, including two Oath Keepers leaders for seditious conspiracy against the United States,” Garland said in a statement. “The Justice Department is committed to holding accountable those criminally responsible for the assault on our democracy on January 6, 2021. The prosecutors and agents on this case worked tirelessly, with extraordinary skill, and in the best traditions of the Department of Justice.”

FBI Director Christopher Wray, who has overseen a sprawling investigation of the Jan. 6 violence, also welcomed the verdicts.

“Breaking the law in an attempt to undermine the functioning of American democracy will not be tolerated,” Wray said.

Rhodes faces a maximum sentence of 60 years on all charges for which he was convicted, including 20 years for the seditious conspiracy count. Meggs faces an 86-year maximum sentence, Watkins faces 56 years, Harrelson faces 46 years, and Caldwell faces 40 years. Defendants are typically sentenced according to federal sentencing guidelines, which can result in terms well below the maximum.

The 12-juror panel deliberated for three full days before reaching its verdict. Outside the courthouse, dejected defense attorneys for Rhodes vowed to appeal the verdict and said they were heartened that the jury acquitted each of the defendants on at least one count. Rhodes’ lawyer Ed Tarpley called it a “mixed bag.” Attorney Lee Bright said he felt the jury was fair — and the mixed verdict an indication of their thoughtfulness — but still believed the outcome could have been different if the case had been tried outside Washington. Bright also praised U.S. District Court Judge Amit Mehta for his handling of the complicated trial. Mehta will sentence the defendants at a date to be determined.

One person in attendance as the verdict was read was U.S. Capitol Police Officer Harry Dunn, who testified during the trial about his interaction with several Oath Keepers outside Speaker Nancy Pelosi’s office. Dunn raced to the courthouse from the Capitol on Tuesday after jurors indicated a verdict had been reached.

Rhodes, Meggs, Harrelson and Watkins have been in prison awaiting trial and will remain there while they await sentencing, as well. Caldwell will remain on release pending sentencing.

During the nine-week trial, prosecutors contended that the group, at Rhodes’ direction, prepared for an armed rebellion against the government shortly after Biden was projected the winner of the 2020 election. Government attorneys painstakingly reconstructed thousands of text and Signal messages sent among key players in the alleged conspiracy during that crucial time period — as Trump falsely claimed to be the victim of widespread fraud and his allies began mobilizing to help him subvert the election results.

Some of Rhodes’ lieutenants, including Meggs, Watkins, Harrelson and Caldwell, were heavily involved in those conversations or, prosecutors claimed, deleted evidence of their involvement. Several others charged in the seditious conspiracy plot are slated to go on trial next month, and another group of Oath Keepers facing obstruction charges for its own Jan. 6 actions is scheduled to go on trial in February.

Throughout the two months after Election Day, Rhodes — a Yale law school graduate and disbarred attorney — employed increasingly bellicose rhetoric to urge on supporters to reject the incoming Biden administration, suggesting at times that he and other Oath Keeper allies should resist the authority of the government and even take up arms against it if Biden were inaugurated. He mounted a public effort to persuade Trump to invoke the Insurrection Act, a 19th-century statute that he claimed would permit Trump to deploy the military and deputize the Oath Keepers as a government-backed militia in order to prevent the transfer of power.

But prosecutors noted that Rhodes repeatedly told followers — using rhetoric drawn from the Revolutionary War era — that they would have to take matters into their own hands if Trump didn’t act. He was present outside the Capitol while a mob of Trump’s supporters ransacked the building and bludgeoned police lines, celebrating the crowd’s actions while two dozen of his allies were inside.

And he later lamented after the Jan. 6 attack on the Capitol that his supporters opted not to bring their rifles to Washington.

Defense attorneys contended that Rhodes and the other four Oath Keeper defendants were prone to violent rhetoric but took no effort to back up their words. They noted that they left their firearms arsenal at a Comfort Inn in Arlington, Va., on the day of the riot. They traveled to Washington to perform security details for speakers at Trump’s “Stop the Steal” rally and related events, including figures like longtime Trump ally Roger Stone and event organizer Ali Alexander, who were among those in a Signal chat with Rhodes shown by prosecutors and defense attorneys.

Rhodes’ lawyers said he didn’t order or authorize his allies’ decision to enter the Capitol during the riot, and some witnesses said he later described their decision to go inside as “stupid.” The Oath Keepers also had a practice of establishing an armed “quick-reaction force” alongside security operations they participated in, just in case events turned violent — not an arsenal meant to overthrow the government, their attorneys said.

Josh Gerstein contributed to this report.