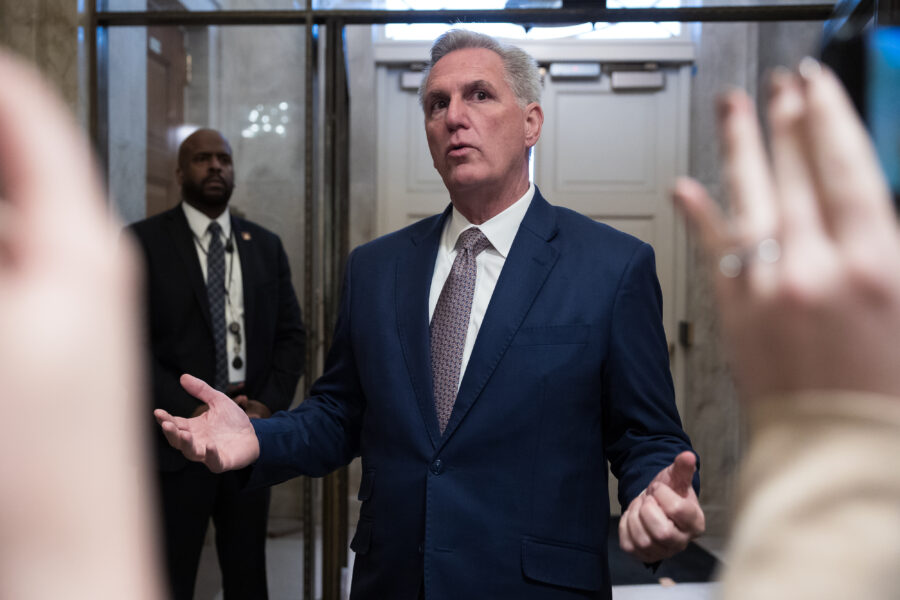 “Knives Out” isn’t just playing on screen this week: Conservatives are digging in against Kevin McCarthy before the conclusion of a closed-door fight over consolidating the House GOP leader’s power.

As House Republicans keep debating their rules for next year’s majority, the Freedom Caucus — home to several members seeking to derail McCarthy’s speakership bid — is pushing for institutional changes that they argue will restore power to rank-and-file members. Before that debate Wednesday, McCarthy allies likely will move to scrap or neuter some of the Freedom Caucus’ dozen or so proposals.

Members of the pro-Trump group had clamored earlier this month to restore House members’ ability to oust the speaker, though that effort got silenced by a counter-proposal from Rep. Mike Turner (R-Ohio) that requires a majority of the conference to back any anti-speaker vote. Freedom Caucus members accused leadership of lining up opposition to their initial round of changes while postponing more controversial ideas until this week.

Rep. Dan Bishop (R-N.C.), who has a proposed rules change on the Wednesday agenda, said that “I don’t think the first [debate] was very productive” and that he hasn’t decided if he’ll back McCarthy for speaker on Jan. 3. Bishop added that he’s looking to see if Wednesday’s session will be “different in tenor than” the pre-Thanksgiving session, saying “I don’t think it has much utility if it’s not.”

Among the Freedom Caucus-backed demands is one from chair Rep. Scott Perry (R-Pa.) that would reshape the House GOP Steering Committee, a leadership-driven group of lawmakers that decides most gavels and committee assignments. Perry’s proposal would “relieve [the steering panel] of the responsibility to recommend committee chairs.” And he’s offering another that would require any amendment considered on the House floor to boast backing from “the majority of the Republican conference.”

The House GOP will also consider a proposal to ban earmarks that was offered by Rep. Tom McClintock (R-Calif.). They are under fierce pressure from conservatives and outside groups to adopt the proposal, but leadership allies are predicting that the conference will reject his bid and give McCarthy a valuable carrot in his search for the votes he needs to win the top gavel.

And that makes the rules debate particularly prickly for McCarthy: He must balance the appearance of acquiescing to some conservative demands while also ensuring that whatever ground he gives doesn’t undercut him if he does become speaker.

“If McCarthy wants to be Speaker, he should support the Freedom Caucus’ rules package,” said Cesar Ybarra, vice president of policy at the conservative outside group FreedomWorks. “McCarthy is not popular with the conservative base, so we understand why dozens of Republicans voted against him for Speaker earlier this month. This is a great opportunity for each member to have the ability to influence the legislative process, a practice that is currently stifled by leadership.”

Rep. Warren Davidson (R-Ohio), a Freedom Caucus member, argued that internal party rules will be “really important” next Congress because of the party’s “narrow majority.”

“We’re gonna have to agree on how to work together to be pretty effective,” Davidson said.

McCarthy critics are pledging that more skeptics will speak out over the next five weeks, creating a steady drip that highlights the fragility of his speaker bid as the floor vote nears.

Biggs, who unsuccessfully ran against McCarthy earlier this month for the GOP speaker nomination, predicted Monday that the California Republican is still down roughly 20 votes, describing that group as “pretty hard nos.”

“I was told by a number of people, who came after to me afterwards, who aren’t members of [the] Freedom Caucus, [that] ‘Hey, I voted for you’ or ‘I voted against Kevin,'” Biggs said on a Conservative Review podcast, adding that enough embers were lit to “prevent Kevin from getting the speakership.”

McCarthy can only afford to lose a handful of Republican votes in January, perhaps as few as five. And he’s vowing to take the fight all the way to the floor, even if it means multiple rounds of voting ballots.

By Biggs’ estimate, the California Republican has already flipped some GOP lawmakers who opposed him less than two weeks ago, though a faction of them were always viewed as less than committed opponents. Thirty-one House Republicans voted for Biggs during this month’s internal vote to nominate McCarthy as the conference’s speaker pick, while five others backed other write-in candidates and one Republican abstained.

More rank-and-file House Republicans say they aren’t sure what sort of deals McCarthy is offering in these meetings, some of which are taking place one-on-one with the GOP leader.

Conservatives were venting before Thanksgiving that many of their proposed changes got shot down because GOP leaders lined up opponents to speak against them during the first round of closed-door conference debate. This week isn’t likely to play out much differently, which could fuel a new round of angst toward the GOP leader.

Rep. Rodney Davis (R-Ill.), a McCarthy ally who lost a primary race to a GOP colleague after redistricting, argued that a rules fight happens every Congress and cautioned more junior lawmakers to ignore Freedom Caucus-backed ideas.

“There are certain members that will always advocate for rules changes, some of them the same rules changes that they’ve advocated for my entire career,” Davis said, adding that with time those members often realize they weren’t “such good ideas.”

“That being said, Leader McCarthy has got to find a way to get the number of votes [to be speaker],” Davis added. “Which I think he will.”