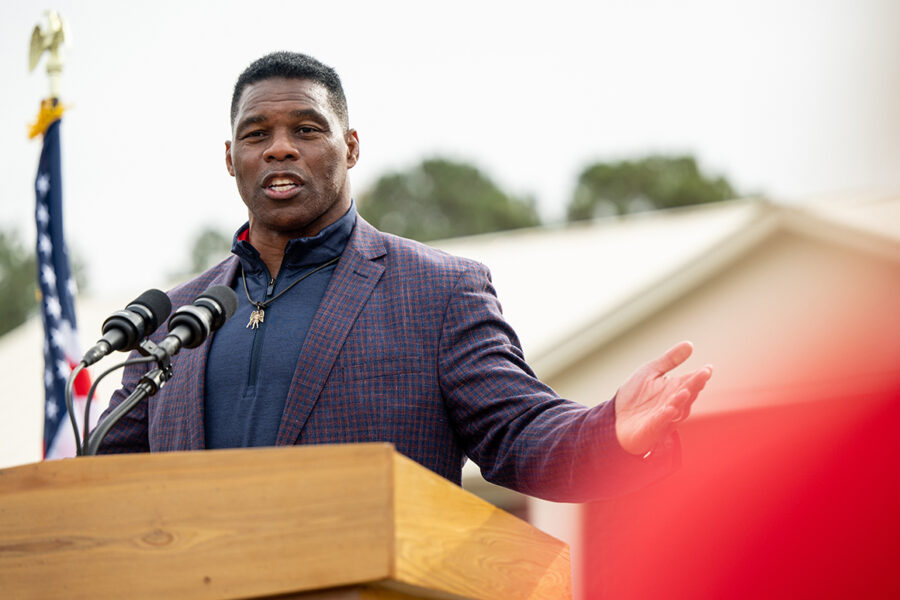 McDONOUGH, Ga. — A GOP civil war is underway, and Republicans in Georgia are caught in the middle of the skirmish.

Dueling Republican factions are openly competing for relevance as a Dec. 6 Senate runoff approaches, arguing about which wing of the party is best positioned to help Herschel Walker net a victory. The election is the GOP’s last shot at maintaining its current 50 seats in the Senate, rather than losing one to Democrats.

But Senate Republican infighting isn’t the only dispute affecting the Peach State race. Georgia GOP activists are worried about the potential effect of Donald Trump launching his 2024 run on Tuesday, an announcement that local party leaders fear could depress turnout among moderate Republicans — votes that Walker needs to beat Democratic Sen. Raphael Warnock, who finished just ahead of him in last week’s election. Despite even some of Trump’s own allies urging him to delay an announcement until after the runoff election, Trump declined to wait.

“Well, for his own reasons, he didn’t,” former Arkansas Gov. Mike Huckabee said in an interview after a chilly outdoor rally for Walker on Wednesday, when asked whether Trump should have held off. “You know, I sure hope it has a wonderful effect.”

Huckabee, one of a rotating cast of national Republicans coming to the state to stump for Walker, shrugged off the intra-party squabbling, including an ongoing feud between Senate Minority Leader Mitch McConnell and Sen. Rick Scott (R-Fla.), chair of the National Republican Senatorial Committee.

“Competition, as I’m sure Herschel would tell you, breeds excellence,” Huckabee continued. “No one ever likes it. … And so as long as it doesn’t end up with bitterness and longstanding hostility, let’s everybody say, ‘Look, this is the job I want,’ and prove why they ought to be the one to get it.” 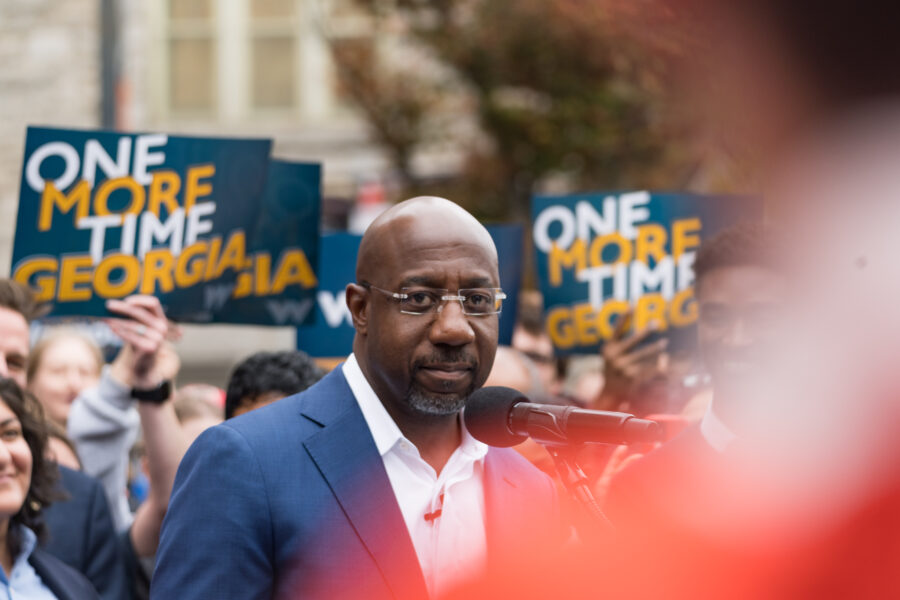 But the hostility has been out in the open in recent days.

Huckabee’s comments came moments after McConnell on Wednesday was elected by his conference to lead them for another term in Congress, despite Scott mounting a challenge. A long-simmering, mostly private tension between the two men and their allies came to a head this week as their respective political consultants resorted to publicly insulting each other, particularly over how each was approaching the upcoming Georgia election. It culminated with Scott and nine other senators saying it was time for McConnell to step aside, while other members siding with McConnell suggested the NRSC’s finances this cycle should be audited.

A document obtained by POLITICO that the NRSC distributed during a Tuesday luncheon of Republican senators — an hourslong affair that became heated between the Scott and McConnell factions — highlighted the Scott-led committee’s fundraising struggles. The NRSC raised less this year than its Democratic competitor and its Republican predecessors in 2020.

The NRSC brought in $208 million this cycle, according to the paper given to members. That figure, the document noted, is less than the Democratic Senatorial Campaign Committee’s $251.6 million raised, though the NRSC outspent its Democratic counterpart on television.

This year’s NRSC haul is also less than the $215 million the committee had raised at this point of the 2020 cycle, prior to the Georgia runoff, according to the memo.

The NRSC document said payoff of the committee’s $20 million in debt this cycle “will be determined after the GA runoff.” A spokesperson for the NRSC told POLITICO the fundraising figures for the DSCC and past NRSC include those committees’ loans; all funds the committee is currently raising, according to the NRSC, will be used for the runoff election and not for paying off debt.

Notably, there are now two separate Republican get-out-the-vote operations on the ground in Georgia. One is funded by SLF, which is tapping into Gov. Brian Kemp’s field staff and voter data, and another is being operated by the Republican National Committee in collaboration with the NRSC and state GOP, all of whom are sharing office space.

Chris Hartline, NRSC spokesperson, said the committee, Walker’s campaign, the RNC and state party are “all in to make sure Herschel has a big win.”

John Watson, the former chair of the Georgia Republican Party, lauded SLF’s decision to get involved with voter turnout, rather than staying in the super PAC’s traditional lane of television advertising. Watson called the development, announced last week, the “most material change to benefit Herschel in this race, and I think that’s a big, really big deal.”

A GOP strategist involved in Senate races, speaking on the condition of anonymity, suggested the ongoing power struggle “actually helps, because you’ve got two factions tripping over each other to demonstrate value in the most important race left for Republicans this year.”

This is the second Senate runoff election in two years for voters in Georgia, where state law requires candidates to win with more than 50 percent of the vote to avoid it. As a result, Georgia voters are familiar with national Republican infighting, having endured two months of GOP squabbling as Trump and top conservative voices cast doubt on the integrity of the 2020 election and debated whether the January 2021 runoff would be fair.

As a result, a critical mass of the Republican base sat out the runoff elections that decided control of the Senate last cycle, ultimately placing the narrow majority in Democrats’ hands. A similar cloud over the state’s upcoming runoff could threaten GOP turnout, Republican officials fear, a scenario that would cost the GOP the seat again.

Walker, meanwhile, is steering clear of the GOP squabbling, remaining in regular contact with both Scott and McConnell, both of whose assistance he needs as Warnock continues to raise significantly more cash.

Despite Trump giving a nod to Walker in his speech Tuesday night, Walker at his campaign stop on Wednesday avoided discussing Trump, McConnell or Scott — declining to mention either of the three in his 20-minute speech to supporters, or to take questions from reporters after his event.

Neither Trump nor Florida Gov. Ron DeSantis, a top potential 2024 rival, has publicly said if they plan to venture to the state to rally on behalf of Walker.

Asked whether Trump would likely help or hurt GOP turnout, Cody Hall, a Kemp senior adviser, said Republicans’ focus the next few weeks should be on highlighting Warnock’s support of President Joe Biden’s agenda, and that “recent history in Georgia runoffs proves that anything else is a distraction.”

Kemp on Wednesday announced his first runoff campaign event with Walker, a joint appearance in the outer-Atlanta suburb of Cobb County.

The emphasis then seemed to drift from Georgia issues to the national stakes of Republicans securing a Senate majority. Now that winning the Senate is no longer on the line, Shepherd said, it’s even more crucial for the race to stay local — and that means Trump staying out, too.

“I think it’s going to hurt Walker’s chances,” Shepherd said of Trump’s campaign launch. “I really wish that he had waited until after this runoff was over before announcing. There’s really no reason he had to get out this early, especially with the focus being on Georgia.”

David Bergstein, a DSCC spokesperson who posted a photo of himself on Twitter Tuesday eating a bag of popcorn and laughing while his computer was open to a story about Scott challenging McConnell, described the Georgia runoff as “the latest front in Senate Republicans’ intra-party feud.”

“Their attention, resources and strategy are all wrapped up in their own petty, nasty infighting — and while they’re turning on each other, we’re focused on reaching every voter we need to win,” Bergstein said in a statement to POLITICO.

Kaaryn Walker, a Republican consultant in Atlanta and founder of Black Conservatives for Truth, said the focus ahead of the runoff is being “muddied” by the “blame-game.”

“Pretty much, this is a whole bunch of noise,” she said of the national drama trickling down. “Georgia needs it only to be about Herschel.”