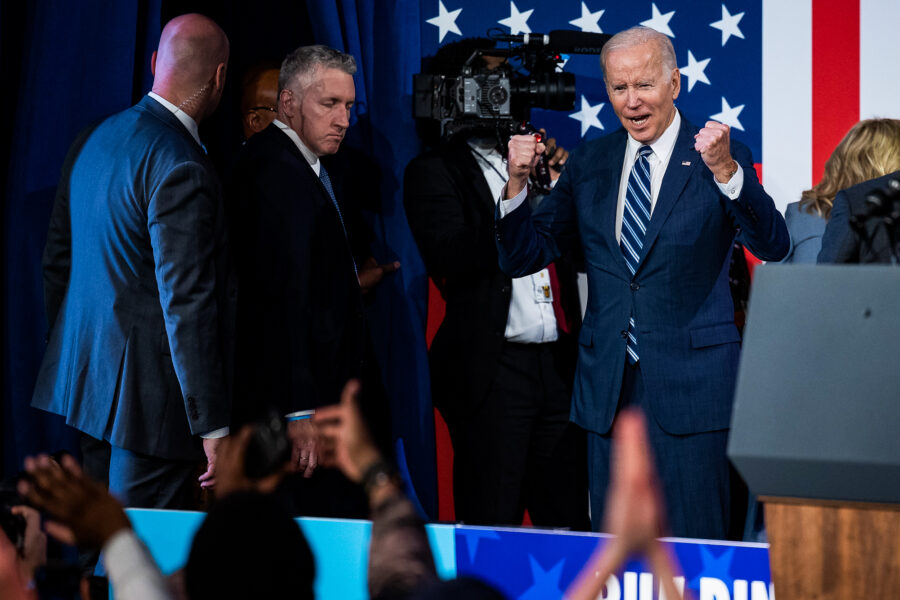 President Joe Biden enjoyed a historic midterm election result, one that only the most optimistic Democrat could have imagined. But his White House is still set to face some tough new realities.

On Monday, Biden conceded at a press conference that his party was unlikely to hold on to the House, noting that the few remaining toss-up races were tilted toward the GOP.

Should it come true, a new era could be inaugurated in Washington — one likely to be defined by both chaos and dysfunction within a bare-thin GOP majority and gridlock and partisan trench warfare between that chamber and the White House. The White House will need to avert a potentially calamitous standoff over the debt ceiling and circumvent a wave of new investigations. Beyond that, there is fear of grinding budget battles and brinkmanship that could undercut Biden’s ability to govern and tie his hands should the economy sputter.

Having spent two years guided by Biden’s fervent belief that government can accomplish big things, the next challenge facing Democrats may be ensuring it remains functional.

“The opening expectation is it’s going to be very difficult to get anything done legislatively,” an adviser to the White House said. “Fundamental activities like raising the debt ceiling and funding the government are going to be put in doubt.”

Under the likely new congressional composition, Biden will hardly be powerless. Democrats held onto their Senate majority and even have a shot at expanding it with a win in Georgia next month, allowing the White House to continue reshaping the nation’s judiciary and making executive branch appointments. The slimness of a GOP majority makes it less likely that they can mount successful standoffs over things like the debt ceiling or government funding.

But even a tiny GOP House majority represents major hurdles for the president, who no longer will have the full Democratic control he enjoyed in ushering through a remarkable slate of legislation: from Covid relief to a bipartisan infrastructure bill to long-held Democratic priorities on climate change and health care.

“The Biden presidency will be under serious assault from early January on,” said Timothy Naftali, a New York University professor and presidential historian. “In that kind of environment, it’ll be very hard for any legislative leader to attain any compromise even on the simplest and most nonpartisan issues. Everything becomes partisan.”

Inside the White House, aides had prepared for the midterms to go worse than they did. And the party’s surprising strength across several swing districts has heartened Biden allies who saw it as a sign that the president retains broad support — and who hoped that resilience might quiet whispers about his ability to lead Democrats into 2024.

Democratic candidates locked in the closest races had spent the campaign’s stretch run distancing themselves from Biden, with some suggesting outright that he should not seek another term. And there are still lingering doubts about the White House’s effectiveness, with some in the party urging top Democrats not to allow the night’s surprising results to paper over voters’ pre-existing concerns on the economy and crime.

“I hope that, no matter what happens, there’s a course correction,” said Jim Kessler, executive vice president for policy at centrist think tank Third Way, adding that a weak slate of Republicans aided Democratic incumbents in critical districts. “If Democrats are doing better than the conventional wisdom, we have to realize that part of the reason is Republicans shooting themselves in the foot.”

But the White House and its allies also see the midterm results as close to the best-case scenario for Biden, noting that the party in power typically suffers sizable losses — and that by any measure, Democrats this year outperformed expectations largely across the board. Republicans under former President Donald Trump lost 40 House seats in 2018; in 2010, Democrats lost 63 in what then-President Barack Obama dubbed a “shellacking.”

Bolstered by voter outrage over abortion and uneasiness with the GOP’s far-right drift, Biden instead will retain his slim Senate majority. That would ensure a bulwark against Republican efforts to unwind his accomplishments in key areas like health care, taxes and climate; allow him to confirm nominees and judges; and provide leverage for negotiations with a GOP-led House.

The fact the night did not turn out far worse for Democrats, allies said, also served to reinforce the popularity of Biden’s core agenda. Even as many candidates distanced themselves from the president himself, Democrats almost universally embraced and ran on his signature accomplishments.

“I don’t think the agenda is going to change,” said one Biden adviser. “It’s just a question of how to go after it.”

Speaking to reporters the day after the election, Biden was more blunt about what he’d do differently over the next two years: “Nothing.”

Still, major questions will soon confront the White House, surrounding everything from funding to support for Ukraine to what tools the government will have to fight the Covid pandemic. In recognition of those uncertainties, officials have discussed using the lame duck session to clear a series of lingering priorities — including lifting the debt ceiling and securing at least $8 billion for its domestic Covid response.

“That can really hold Biden hostage,” Dean Baker, co-founder of the Center for Economic and Policy Research, said of a GOP House majority. “If you get into a recession, it’s going to be very hard to make the case for more spending.”

Come 2023, the hard electoral math means Biden’s vast plans for remaking the nation’s social and economic safety net will likely remain unfinished. Even if Democrats were to pull off an improbable run that kept them in control of the House, the margins would be so thin it could be difficult to advance any robust agenda. On an array of hot-button issues he has vowed to address, including abortion and guns, advisers have already acknowledged they’ll have little power to drive substantial progress.

“I don’t think they can expect much of anything other than we’re going to maintain our positions,” Biden said Monday about what Americans can expect Congress to do on abortion.

A Republican-controlled House will also be armed with subpoena power and plans to unleash an onslaught of investigations. The White House has spent more than a year preparing, and aides believe a GOP House will be led by extremist voices and very well may be prone to overreach. But while many in Biden’s orbit think that congressional Republicans could be a useful political foil, a grim resignation has also begun to set in as to how the investigations, frivolous or not, would dominate the White House’s day-to-day workings.

The other topic soon to command the headlines will be speculation about Biden’s own political future.

No official decision about a reelection campaign will be made until after family talks begin at Thanksgiving, days after the president marks his 80th birthday. A final call could come before the year is out but will more likely be made in the first months of next year, according to those close to the president.

Biden is already the oldest man to hold the presidency. And some Democrats have openly speculated that it would be time to hand power to a younger generation.

But Biden has given no indication that he plans to step aside. Among Democrats, the expectation was that the better-than-anticipated midterm results would only reinforce his belief that he has earned a shot at another four years.

“This strengthens him as our party leader,” said one adviser to senior Hill Democrats. “Why would you not run?”