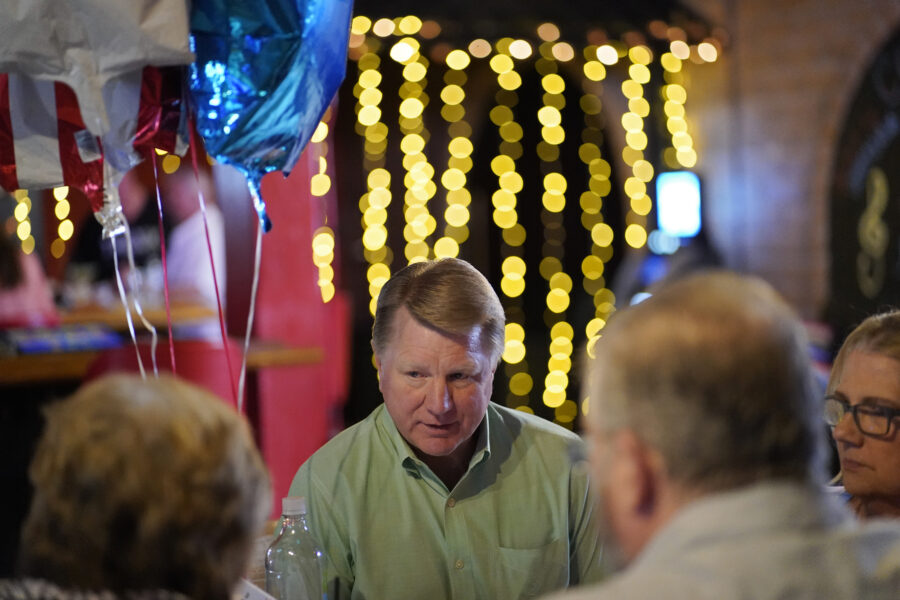 Former President Donald Trump endorsed four Republicans for secretary of state positions in the general election, boosting candidates who have cast doubt on the legitimacy of U.S. elections in some of the most closely divided states.

Every single one of them lost.

Democratic incumbents Jocelyn Benson of Michigan and Steve Simon of Minnesota both beat back challenges. Arizona’s Adrian Fontes — a former elections official in the state’s largest county — won the open seat in his state. And this weekend, attorney and first-time candidate Cisco Aguilar was declared the winner in Nevada.

Their wins blocked a group of Republicans who deny President Joe Biden legitimately won the 2020 election from overseeing the vote in key battlegrounds in 2024: Jim Marchant in Nevada, Mark Finchem in Arizona, Kristina Karamo in Michigan and Kim Crockett in Minnesota.

“I think voters took seriously this idea that we’re at a pivot point, when it comes to our democracy,” Simon said in an interview. “It’s OK to be skeptical — always — about government, and elections are no different. But when you go beyond that to outright hostility and disinformation, people don’t want to be a part of that.”

The Democratic sweep came after the party devoted significant attention and resources to secretary of state contests. The Democratic Association of Secretaries of State and its affiliates raised $30 million over the election cycle, about 7.5 times what the committee raised in 2018 and 2020 combined. iVote, a long-running outside group focused on battleground secretary of state contests, brought in $15 million, roughly double what it did in 2018. And other liberal groups, including End Citizens United and EMILY’s List, rushed millions more into key contests, alongside candidates who broke fundraising records in their own states.

Democrats used that money to go up on TV well before the election, which is usually not a luxury afforded to candidates in these down-ballot races. Broadly, the candidates ran positive spots boosting themselves, leaving the outside groups to rip into the Republicans as unfit for office.

“That’s what allowed us to define these people … going in early and going big,” said Kim Rogers, the executive director of DASS. She noted that the pre-election window to communicate with voters “is pivotal in these races. We knew we could win if we had the resources to communicate with voters, and not only did we win, we’re outperforming the top of the ticket because of it.”

Indeed, the Democratic secretary of state nominee is running ahead of the party’s candidate for governor in all four states. It is a dramatic shift from past years, when some voters have typically skipped voting in down-ballot contests like these. But this year, the races got more attention than they ever have before.

“My previous name ID was at 10 percent,” said Benson. “The fact that we got to 70 percent, ultimately, at the end of it was really significant to me.”

Benson attributed that, in part, to the spending on the race. But Trump’s focus on these offices — both before and after the 2020 election — has made voters pay more attention to them.

“My profile increased significantly the day Donald Trump tweeted at me in May of 2020,” she said. “That has negative ramifications, very significant ones, but it also boosts the awareness and attention about our race.”

Trump also stumped for three of the four Republican candidates in the closing weeks of the midterms, calling them on stage during campaign rallies. That drew eyeballs to the race, as did former President Barack Obama’s intervention on Democrats’ behalf at the end of the campaign.

“For former President Obama to come to Michigan, and in his speech to talk about me and my race — just as he did in Nevada for Cisco Aguilar — really made an impact and had people who previously might not have paid attention pay attention,” Benson said.

In the end, operatives working on the races said while Republican candidates’ positions on the 2020 election riled up a segment of the Trump base, it broadly cost them with voters, helping Democratic candidates not only win but run up the score compared with other contests.

“What we found in our research was that people wanted an unbiased, fair — almost boring — election administrator,” said Ellen Kurz, the co-founder and president of iVote. Voters “were totally tired of relitigating 2020. Even people who believed the election was stolen were like, ‘Why are they talking about that still?’”

“It did help us that we were running against people who were out there,” she continued. “I can’t deny that that wasn’t a help to our side.”

Kurz noted that Democrats were unable to beat Georgia Secretary of State Brad Raffensperger, the Republican incumbent, because “people didn’t think that Raffensperger could be bought.” Raffensperger, too, had the distinction of beating a Trump-backed challenger, defeating Rep. Jody Hice in the GOP primary over the summer before dispatching Democratic state lawmaker Bee Nguyen in last week’s general election.

The results across the board mean that none of the biggest battleground states will have a “stolen election” conspiracy theorist overseeing the vote in 2024.

In addition to Raffensperger and the four Democratic secretary of state victors, Pennsylvania Democrat Josh Shapiro’s election as governor means he will appoint the state’s chief election official instead of Republican Doug Mastriano, his defeated opponent who was among the most prominent national figures undermining confidence in elections.

Wisconsin also reelected Democratic Gov. Tony Evers instead of Republican Tim Michels, who was advocating changes to the state’s election oversight and hadn’t ruled out participating in the push to “decertify” the 2020 election results, a position with growing popularity in some quarters of the GOP — but no legal grounding.

Evers’ win — combined with Democrats narrowly stopping Republicans from taking a veto-proof majority in the Legislature — means the state’s bipartisan elections board is much more likely to stay intact now.

“It’s just a sense of relief,” said Jena Griswold, the Colorado secretary of state and chair of DASS, who also won her own reelection last week. “Winning these seats was just paramount this election cycle.”

Even amid the Democratic victories, there was some quiet grumbling among those working on secretary of state races about a lack of support from national Democrats, along with broader resource-spending decisions. And there were setbacks in redder states: Diego Morales — a member of Marchant’s America First Secretary of State Coalition — is the next secretary of state of Indiana, and Chuck Gray, another Trump-endorsed candidate who has spread unfounded accusations of fraud, won the office in Wyoming, for example.

“It was an emergency. We stopped the emergency for the presidential [election], that’s the biggest takeaway,” said Kurz. “That’s good. … There’s still a lot of work to do.”