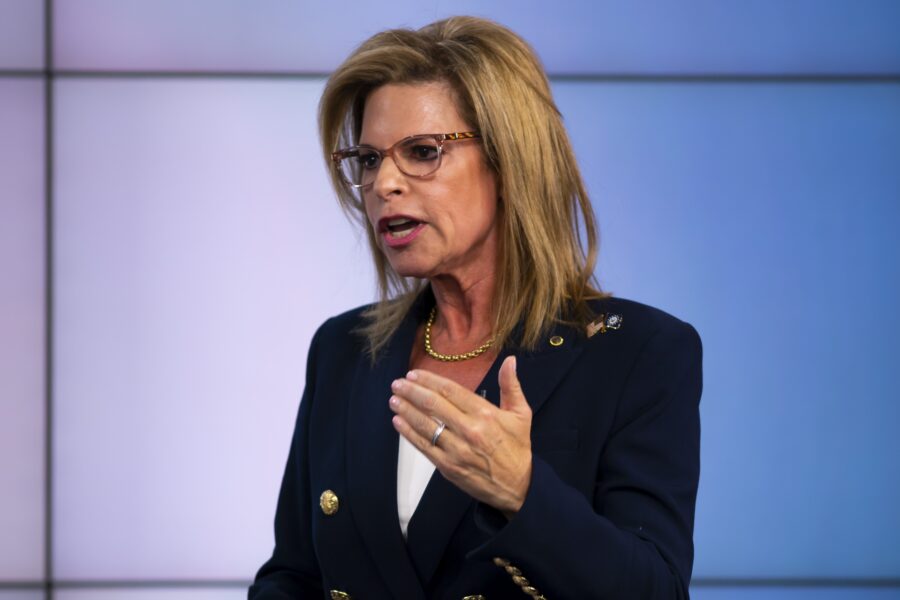 Republican primaries resumed one day after the FBI search at Mar-a-Lago, which appears to have only cemented Donald Trump’s standing in the GOP ahead of 2024.

Republican strategists working for potential rivals to Trump ahead of the next presidential election were already preparing for the likelihood that he could now clear the field; Republicans across four midterm primary states on Tuesday were rushing to his side.

Election deniers had a good night. So did women. But the week belongs to Trump.

Here are five takeaways from a key primary night:

‘It’ll be a coronation at this point’

The most consequential development in a Republican primary this week did not come on Tuesday, but the day before, at Mar-a-Lago.

If there was ever a lane for a Trump-y — but not Trump — Republican in the 2024 presidential primary, it now appears to be that much narrower.

“Completely handed him a lifeline,” groused one Republican strategist who advises a potential rival to Trump in 2024. “Unbelievable … It put everybody in the wagon for Trump again. It’s just taken the wind out of everybody’s sails.”

For any other Trumpian candidate, the strategist said, “It’s over.”

John Thomas, a Republican political strategist who had been organizing a PAC to support DeSantis in the event he runs in 2024, said on Tuesday, “We can hang it up.”

“It couldn’t be clearer,” he said. “If Trump wants it at this point, I don’t see how it’s not his … It’ll be a coronation at this point, not a primary.”

Republicans seemed to know this Tuesday, and not just at the national level. In a Republican Party enamored by Trump’s grievance politics, the FBI search cast him more plainly than ever as a politician persecuted by the left.

And Republicans who weren’t immediately rushing to Trump’s defense were taking hits for it. On Tuesday morning, Tim Michels, the Trump-backed businessperson who ultimately defeated former Lt. Gov. Rebecca Kleefisch in Wisconsin’s gubernatorial primary,said on Twitter, “If the federal government can do this to a former president, imagine what they can do to you. People are right to be concerned. Rebecca Kleefisch is wrong to stay silent.”

Shortly after, Kleefisch wasn’t silent at all, writing that the FBI’s search and seizure was “shocking” and that she is keeping “President Trump and his family in my thoughts.”

But good for Trump is not necessarily good for the GOP

If the search of Mar-a-Lago was beneficial for Trump, it may not be helpful to the GOP in the midterms.

Yes, Republicans are fundraising off of the stunning event, and it’s possible Republicans will remain so animated about it that it will help with turnout in the fall.

“Right-of-center voters are going to be energized,” said Dave Carney, a national Republican strategist based in New Hampshire, and some Democrats on Tuesday said they feared the same.

But whatever the search does for GOP energy and money, it will come at a cost. Republican political professionals had been holding out hope that Trump might wait until after the midterms to announce his expected presidential run, desperate to keep public attention this year on the economy and President Joe Biden’s faltering public approval ratings.

But the spotlight is back on Trump now.

For some Republican politicians, like Scott Jensen, the Republican who won his gubernatorial primary in Minnesota on Tuesday, that’s likely to be a problem.

For decades, Republicans fashioned themselves as the party of law and order, something Trump used successfully with his chants of “Lock her up!” in 2016 and, less successfully four years later, with hispoaching of Nixonian rhetoric in response to civil rights protests across the country. And Jensen, following that playbook, has been hammering Minnesota’s Democratic governor, Tim Walz, as soft on crime.

The FBI’s execution of a search warrant at Trump’s Mar-a-Lago estate on Monday, if nothing else, may blunt that argument. And Republicans appear to know it.

“You’re either ‘law and order’ or you’re not,” said Michael Brodkorb, a former deputy chair of the Minnesota GOP. “There are a number of Republicans who like to talk about law and order while simultaneously picking which laws and order they want to follow.”

He said, “I can see it becoming possibly an issue.”

Desperate for a reboot after its own members pilloried it as the party of old white men, the GOP has successfully ramped up its effort to land diverse recruits.

The party officially added another one Tuesday night in Connecticut: George Logan, a former state senator whose grandparents immigrated from Jamaica and Guatemala. He won an uncontested primary to take on Rep. Jahana Hayes (D-Conn.) in a district that Republicans are growing increasingly optimistic about contesting this fall.

All together, the GOP has landed a candidate of color in more than a dozen battleground House districts, according to a POLITICO analysis. And that number is likely to grow with expected wins by George Santos in New York and Allan Fung in Rhode Island. Recruiters hope this diverse slate of candidates will reform the party’s image and perhaps bring more diverse voters into the GOP’s fold. 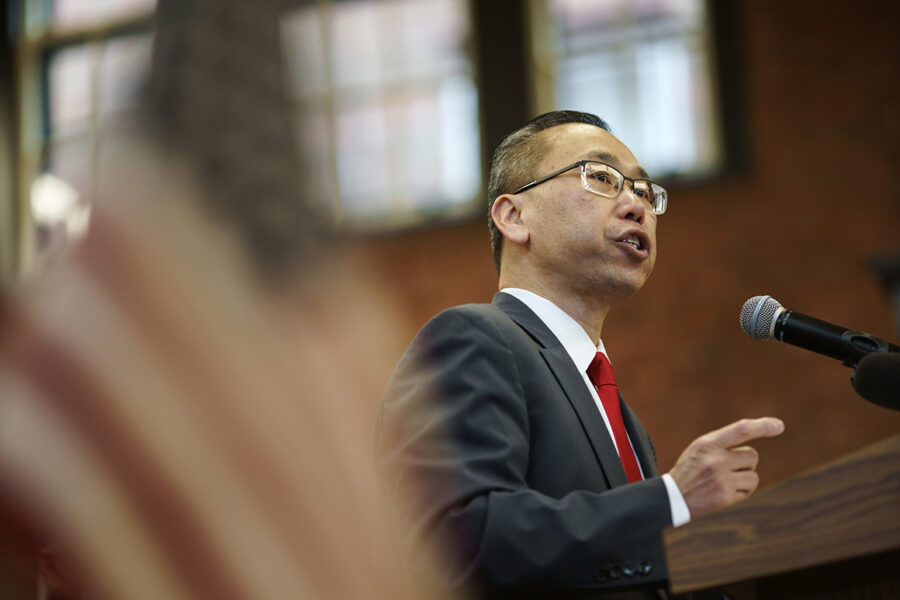 Republicans are very likely to add at least two more Black members in the House: Wesley Hunt, who won a newly created red seat in the Houston suburbs; and John James, a frontrunner for a swingy seat near Detroit. Meanwhile, John Gibbs, a Black former Trump administration official, ousted Rep. Peter Meijer (R-Mich.) in a primary last week and will try to defend the seat for the GOP. And in Indiana, Jennifer-Ruth Green, a veteran who is Black, is set to take on Democratic Rep. Frank Mrvan in another swing seat.

While the Republican Party is laboring to diversify its ranks, one state that has not had much of it at all – Vermont – is poised to send the state’s first woman to Congress.

Late Tuesday, Becca Balint, the state Senate president, won her primary. She is heavily favored to win in the fall. If she does, Vermont will lose its distinction as the only state in the country that has never sent a woman to Congress.

Republicans continue to strip away at elections

Republicans continued to elevate candidates in Tuesday’s primary states who want to — at a minimum — radically change their state’s voting process, continuing the party’s war on elections.

There are garden variety election deniers: In Minnesota, Republican Kim Crockett won her party’s primary to challenge Democratic Secretary of State Steve Simon. Crockett has campaigned with election deniers and has cast doubt on the 2020 elections, calling the Georgia runoffs “rigged” in a fundraising email. Democrats have argued that the state could be filled with sleeper statewide races.

The same is true for perennial candidate H. Brooke Paige in Vermont, who was unopposed for the GOP secretary nomination — and also won primaries for attorney general, auditor and treasurer by default. He has spread lies about the 2020 election, but he is unlikely to be a serious contender in the deep blue state.

Even Republicans who don’t regularly outright question the 2020 election promise large changes. Wisconsin’s secretary of state doesn’t actually have any responsibilities with elections — but state Rep. Amy Loudenbeck won the GOP primary on Tuesday in part by campaigning on abolishing the state elections commission that has been the target of Republicans since the 2020 election, and transferring some of those duties to the secretary.

One week after Rep. Rashida Tlaib trounced her primary opponents in Michigan, a second member of the “Squad,” Rep. Ilhan Omar, was locked in a close race against her more centrist primary challenger in Minnesota on Tuesday.

The schism within the Democratic Party persists.

But just across the border from Minnesota, in Wisconsin, Mandela Barnes’ victory in the U.S. Senate primary on Tuesday showed Democrats what an alternative, more unified, universe might look like.

It’s mostly good. Barnes had a clear path to the nomination after his major opponents dropped out in recent weeks. One of them, Alex Lasry,used airtime he’d already purchased to run ads attacking the Republican incumbent, Sen. Ron Johnson.

Lasry may see some benefit from that spending down the road. One Democratic strategist in the state said that if he runs again for public office, “I think in a lot of [party] circles, he did himself a lot of good.”

For Barnes and Democrats at large, instead of spending money and time tearing themselves apart, they got a running start at Johnson, one of the most vulnerable Senate incumbents up for reelection this year.

On the other hand, a lack of vitriol in a primary isn’t all roses for the winner. Barnes will come in for a raft of hits now that the general election is on. One Democratic strategist in the state, bracing for the onslaught, lamented that Barnes “wasn’t tested at all in this primary … Nobody touched him.”