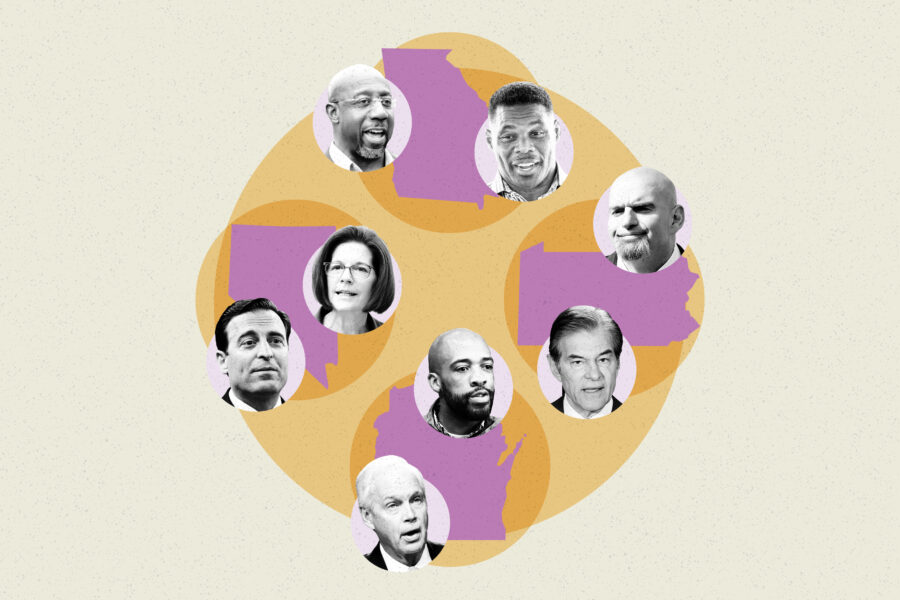 PHILADELPHIA — Democrats’ hopes of holding onto the Senate and perhaps even bolstering their majority — which rose this summer after the national right to an abortion was eliminated and support for the party surged — are sagging under the weight of the dark mood of the nation.

The dynamic was evident last week in Pennsylvania where Democratic Lt. Gov. John Fetterman, after enjoying a comfortable lead over Donald Trump ally and celebrity doctor Mehmet Oz for much of the summer, went into a televised debate barely ahead in the polls.

He stumbled, and his shaky performance came at perhaps the worst time, after he’s been pummeled — like other Democrats around the country — with bad news about increases in inflation and crime. 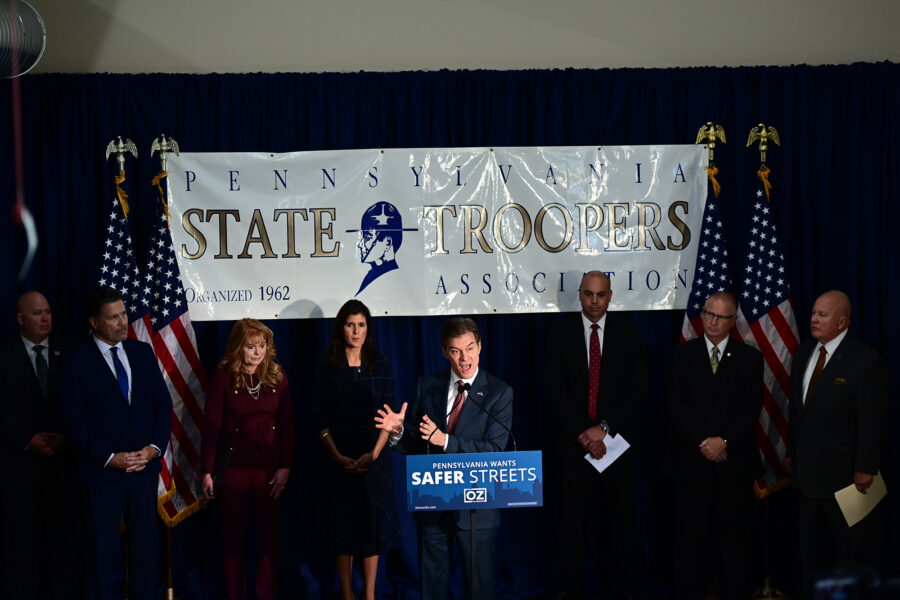 Hours after the debate, where Fetterman struggled to speak clearly because of a stroke in May that nearly killed him, Oz pounded him as weak on crime at a press conference with the Pennsylvania State Troopers Association.

“The state troopers just told me they confiscated, last quarter, seven times more fentanyl than they did in 2020,” he said at the police group’s headquarters. “Seven times increase, all of it because we’re aiding and abetting, inadvertently, cartels.”

With crime up in several big cities, inflation whirring, and many voters pinning the blame on President Joe Biden, GOP and even some Democratic strategists said Republicans now have the momentum in key races for the Senate. But the GOP hasn’t put them away yet, and the contests are close enough that they could go either way.

Though it’s too soon to know the impact of the debate, Fetterman’s one-time advantage has all but evaporated, with him ahead by 1 percentage point or less in polling averages. Though Democrats remain on top in Arizona and New Hampshire, the Senate races there are tightening. In Wisconsin, GOP Sen. Ron Johnson has slowly grown his lead to a modest 3 points, while in Nevada, Democratic Sen. Catherine Cortez Masto is in a dead heat. And in Georgia, Democrats fear that Republican Herschel Walker is gaining despite his myriad personal scandals.

The GOP only needs to net a single seat to win back control of the Senate.

“Things have shifted, and the odds at least modestly favor Republican control of the Senate,” said Sen. Pat Toomey (R-Pa.). “If Republicans hold every seat that we have now, which is the way it’s looking, then the chances of picking up one of Nevada, Georgia, Arizona, even New Hampshire — the odds of picking up at least one — are really pretty good.”

Political forecasters now say that either party could end up with the majority next year, with many strategists arguing the GOP has not yet taken a commanding lead because of its flawed candidates and the still-unknown effect that the transformed debate over abortion could have on voters. In Wisconsin, Pennsylvania, Georgia, Nevada — and even Ohio and North Carolina, which lean Republican — the candidates are separated by 3 percentage points or less in polling averages.

“The movement has been to Republicans,” said Neil Oxman, a Pennsylvania-based Democratic strategist, referring to Senate and House contests. “Because the Biden administration is inept, period. Forgetting about the political crap, the problems of this country that are real have not been solved. … Gas is now close to $4 a gallon and food is still up. … I don’t have any idea what the policy of this administration is on the border.” 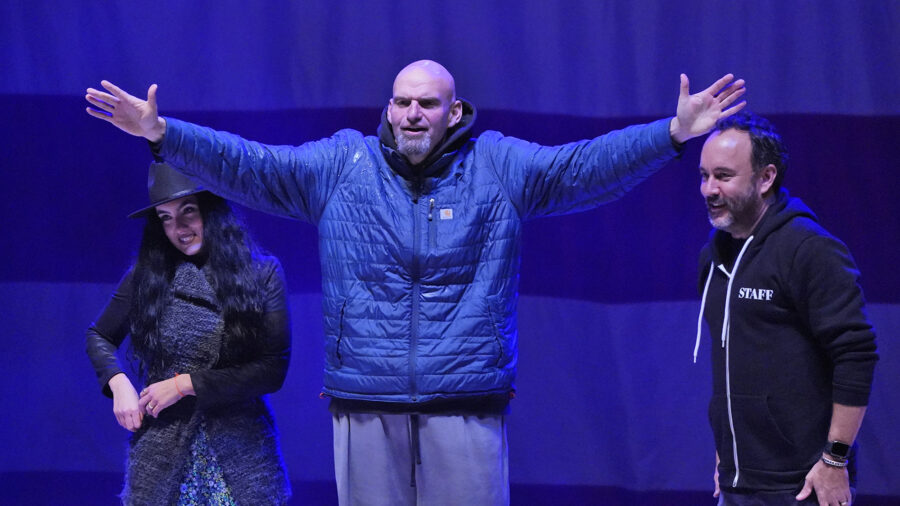 But even with an economy that 68 percent of voters describe as a recession — and polls showing abortion receding from the top of voters’ minds — the most important races for the Senate remain nail-biters in the polls.

Chris Mottola, a Republican consultant, described the state of play in the top Senate battlegrounds as “a lot of coin flips.”

“It’s murkier than usual because of the bizarre nature of a number of races,” he said. “At this point, races are usually baked in.”

Throughout the nation, Republicans like Oz are spending the end of the campaign season hitting their Democratic opponents as unable to manage the country’s crime or inflation problems as they link them to Biden.

In Georgia, a TV ad is trashing Biden and Sen. Raphael Warnock, the Democrat whom Walker is trying to unseat, as “giving us runaway inflation, higher taxes and wasteful spending on projects that don’t help Georgia.”

In Nevada, a spot hits Cortez Masto as having “supported Biden’s hundreds of millions in reckless spending in other states.”

Meanwhile, Democrats vying for the Senate are trying to outrun Biden’s unpopularity by pressing the same case they have for much of the year: that their Republican rivals are faulty, extreme and would further rip away abortion rights.

On the same day that his opponent staged his press conference on crime, Fetterman held a rally in Pittsburgh where he honed in on a remark that Oz made at the debate about how “local political leaders” should have a say in abortion policy. He linked Oz to the state’s GOP gubernatorial nominee, Doug Mastriano, who opposes abortion with no exceptions. Though Oz is backing Mastriano, he has sought to distance himself from that stance, saying that he supports exceptions for rape, incest and the life of the mother.

“[Oz] believes the local political leaders should be the one making that choice, not a woman and her doctor,” Fetterman said at the rally, adding, “Basically, Doug Mastriano.”

Some Democratic Senate candidates are also attempting to distance themselves from their party by making hyperlocal pitches to voters and running as anti-Washington, while keeping abortion at the forefront.

Fetterman is running different TV ads in several media markets in Pennsylvania, seeking to appeal to regional pride and painting Oz as a carpetbagger from New Jersey. In one, a Republican woman jokes that Oz “probably thinks King of Prussia” — a neighborhood in the Philadelphia suburbs known for its mall — “is a European monarch.” Another spot says Fetterman “knows that Washington has forgotten us.” 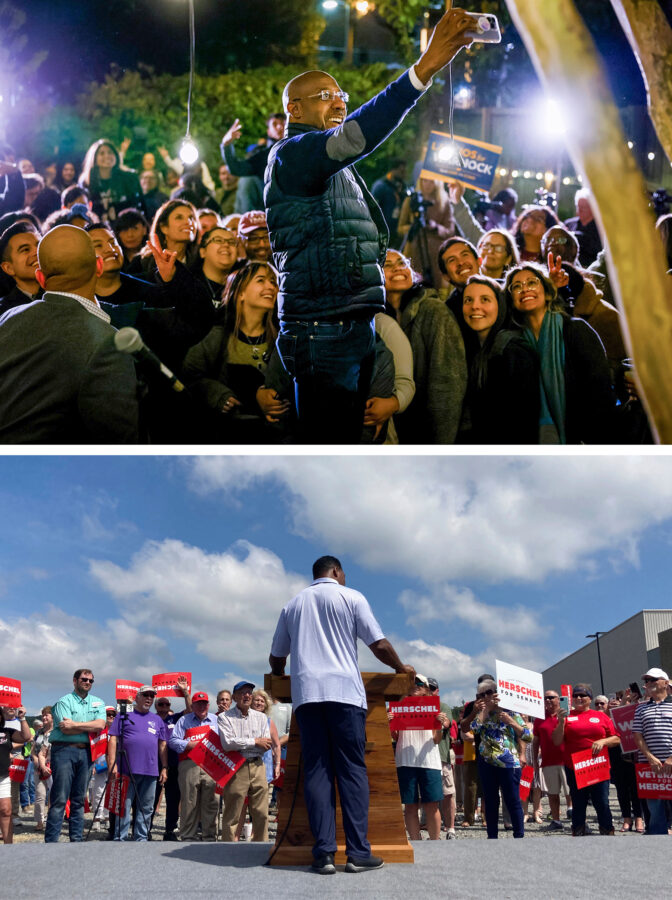 In Georgia, Warnock is airing TV ads in markets throughout the state that feature him speaking in the different areas and local voters praising him. “Hello Albany!” he says in one such commercial. “Hello Macon!” he says in another.

In Wisconsin, a joint TV ad by Democrat Mandela Barnes and the state party warns that “extremist right-wing politicians” like Johnson will ban abortion. And in Nevada, Cortez Masto’s allies are casting Republican Adam Laxalt as someone who “wants to make abortion here in Nevada illegal” and “went to law school in Washington, D.C.” in a spot.

But it’s a difficult line for Democrats to walk at a time when their party controls the White House and Congress.

Chris Hartline, a spokesperson for the Senate Republicans’ campaign arm, said that Democrats’ job approval ratings are dropping as political gravity pulls them down in states such as Georgia.

“The closer you get to Election Day, the more the environment takes over, and the more both Warnock and [Georgia gubernatorial nominee Stacey] Abrams numbers start to look more and more like Joe Biden’s,” he said.

David Bergstein, communications director for the Democratic Senatorial Campaign Committee, said “our incumbents have the advantage in their races, we have multiple offensive opportunities strongly in play, and Democrats are well positioned to protect and expand our Senate majority.”

There are signs that Republicans are retreating in some battleground states. The top Republican super PAC, Senate Leadership Fund, pulled nearly $6 million in advertising reservations earlier this month from New Hampshire, where Don Bolduc is the Republican nominee despite the GOP establishment’s attempts to stop him during the primary. However, the National Republican Senatorial Committee committed about $1 million since, as has a super PAC.

Senate Leadership Fund, which is aligned with Senate Minority Leader Mitch McConnell, also cut bait in Arizona, where Republican Blake Masters has made a number of past controversial remarks about the Unabomber, World War II and other topics, though other GOP groups have stepped in to help pick up the slack.

“After losing his primary proxy war with Trump, Mitch McConnell is being forced to play a game of musical chairs with his money because he got saddled with fundamentally flawed candidates who are too extreme,” said JB Poersch, president of Senate Majority PAC, the leading Democratic Senate super PAC, of the withdrawing of funds by its Republican counterpart.

Jack Pandol, communications director for Senate Leadership Fund, said “Democrats are losing altitude because they ignored glaring warnings from voters to concentrate on their pet issues instead. It’s sad to watch their last-minute desperation to distract from their own failures.”

Ohio’s contest also remains too close for comfort for the GOP. Republican J.D. Vance is leading Democrat Tim Ryan by 1 to 2 percentage points in polling averages in a race that has been close for months, according to election surveys.

And North Carolina has been more competitive than some expected, though Republican Ted Budd has grown his lead recently and is now ahead of Democrat Cheri Beasley by nearly 3 to 5 points. 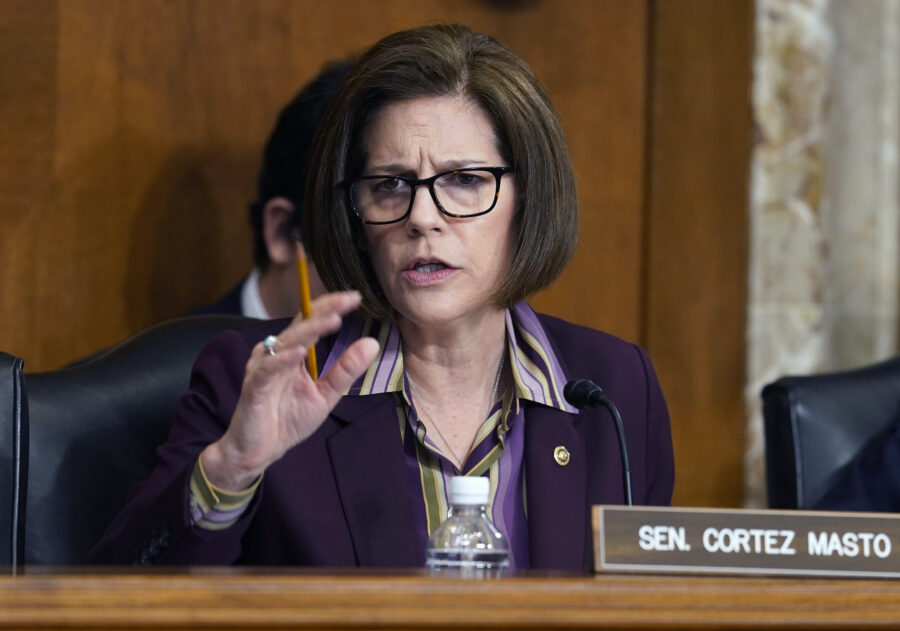 At the same time, Democrats and their allies have continued to plow money in recent weeks into Senate contests in Washington and Colorado, where Biden won by double digits, a sign they aren’t taking any chances there, either.

Democrats are hoping another factor that can help them outpace the dour national mood is a solid ground game. Sen. Gary Peters, chair of the Democratic Senatorial Campaign Committee, said that it has invested “significantly” in its get-out-the-vote operation.

Peters said that he “definitely” sees a path to Democrats winning a 52-seat majority: “I believe we’ll be able to pick up a seat or two.” Toomey, meanwhile, predicted “a small Republican majority — 51, 52, maybe 53 seats.”

Republicans expressed optimism that they have a top-notch ground game as well.

Another indicator that suggests a mixed environment in swing states is pre-election voting, with changes in laws and voting habits due to the Covid-19 pandemic only adding to the uncertainty.

Early and absentee votes have been near 2020 levels in Georgia, suggesting high turnout for a midterm year. Turnout among Black voters was highest on the first day in the state and has dropped slightly since, but is still ahead of where it was at this point two years ago. That’s a potentially positive sign for Democrats, although data on partisan advantage is murkier in a state where voters do not register with a party. Wisconsin similarly does not have party registration.

In Pennsylvania, where voters do register by party, Democrats have a more than 50-point advantage in mail voting so far, which is comparable to this time in 2020. Total mail ballots cast, however, are about 40 percent less compared to this time two years ago.

In Nevada, Democrats have built up a roughly 20,000-vote advantage in Clark County, the state’s most populous area, as of Sunday, although Republicans have put up relatively strong numbers in other parts of the state with fewer total votes.

Meanwhile, improvement for Republicans is apparent in Arizona and North Carolina, where the Democratic share of the early and absentee vote has ticked down slightly compared to 2020, while Republicans’ portion has increased.

Ally Mutnick contributed to this report.