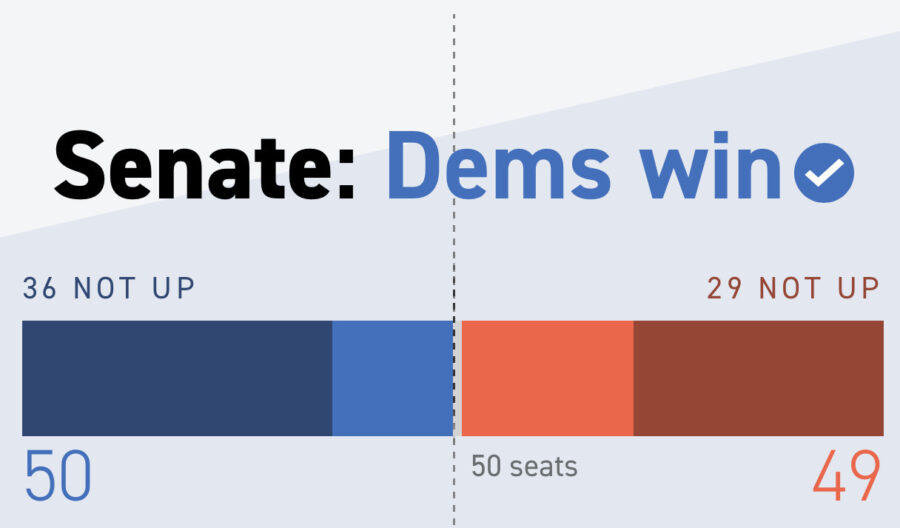 Democrats will retain control of the Senate after incumbent Sen. Catherine Cortez Masto was declared the winner of her closely contested race in Nevada.

Cortez Masto’s victory over Republican Adam Laxalt Saturday means that the Georgia Senate runoff election next month will merely determine the margin that Democrats have in the chamber, rather than control itself.

The outcome in Nevada came after several suspenseful days of counting outstanding mail ballots that favored Cortez Masto and eventually put her over the top. Her win delivered a one-two punch for Democrats in Arizona and Nevada, a pair of battleground states that Republicans contested fiercely.

It was not all bad news for the GOP in Nevada, though: On Friday, their candidate for governor, Joe Lombardo, ousted Democratic incumbent Steve Sisolak. In Arizona, Republican gubernatorial hopeful Kari Lake is locked in a too-close-to-call race with Democrat Katie Hobbs.

The successful reelection bids by Cortez Masto and Kelly lower the stakes of the Dec. 6 Senate runoff election in Georgia. There, Democratic Sen. Raphael Warnock will face retired football star Herschel Walker, after both ran below the required 50 percent mark to win the election outright on Nov. 8.

Unlike the state’s January 2021 Senate runoff, next month’s election won’t decide control of the chamber — but it will determine whether Democrats pad their narrow majority by a seat. If Warnock wins, Democrats will have 51 senators in 2023. If Walker prevails, the Senate will remain 50-50 for another two years, with Vice President Kamala Harris breaking the tie.

Republicans needed to flip only one seat in 2022 to take control of the chamber, but the party suffered a setback when Pennsylvania Lt. Gov. John Fetterman defeated celebrity doctor Mehmet Oz to flip the state’s open Senate seat. The race was one of four this November where a Senate candidate backed by former President Donald Trump lost.

Democrats’ ability to hold their Senate majority this midterm defied both historic precedent and widely held expectations. They did so despite President Joe Biden remaining deeply unpopular, 40-year record-high inflation, soaring gas prices and a chaotic withdrawal of U.S. troops in Afghanistan that resulted in 13 military deaths.

The GOP Senate losses have prompted intraparty fighting, as Republicans point fingers at Trump, National Republican Senatorial Committee chairman Rick Scott and Senate Minority Leader Mitch McConnell. Scott and McConnell have engaged in a power struggle throughout the election cycle, with McConnell suggesting Scott’s committee should have done more to prevent unpopular candidates from clinching the nomination. Scott went rogue, meanwhile, and announced a 12-point policy plan that didn’t get buy-in from McConnell or other members of GOP leadership.

McConnell this summer described the party’s slate of nominees as suffering from “candidate quality” issues — a description born out in public polling that showed many of this year’s Senate Republican hopefuls unpopular or largely unknown by the electorate. Oz and Vance struggled for months to build trust with Republican voters after particularly grueling and contentious primaries, and Democrats ultimately succeeded at portraying the television doctor as a wealthy Hollywood elite who swooped into Pennsylvania for a shot at power.

The GOP base’s cool reception to some candidates came with major financial implications. Republican nominees struggled to raise money in the general election, forcing top super PACs like the McConnell-aligned Senate Leadership Fund to spend $240 million boosting candidates. Some of those funds — $37 million to Ted Budd in North Carolina, and $32 million to Vance — went to helping struggling nominees in states the party thought would be easy to defend this year. That meant diverting money away from places the GOP had eyed earlier in the cycle as difficult-but-doable pickups, such as Colorado and Washington.

SLF also pulled its funds out of Arizona and New Hampshire, two competitive states the super PAC said were no longer winnable with the party’s nominees. The decision drew the ire of top conservatives, who said cutting off funding from Masters and Bolduc was retaliation for the candidates not pledging support for McConnell.

While Republicans threw some money at Colorado and Washington, they ultimately suffered double-digit defeats in both.

Despite Democrats holding the Senate, Biden still faces the prospect of governing a divided Congress.

Republicans are favored to narrowly capture the majority in the House, where a number of races remain uncalled. And if the Senate remains split 50-50, Biden may again have to contend with dissension within his party from Sens. Joe Machin and Kyrsten Sinema.

Biden has pledged to work with Republicans.