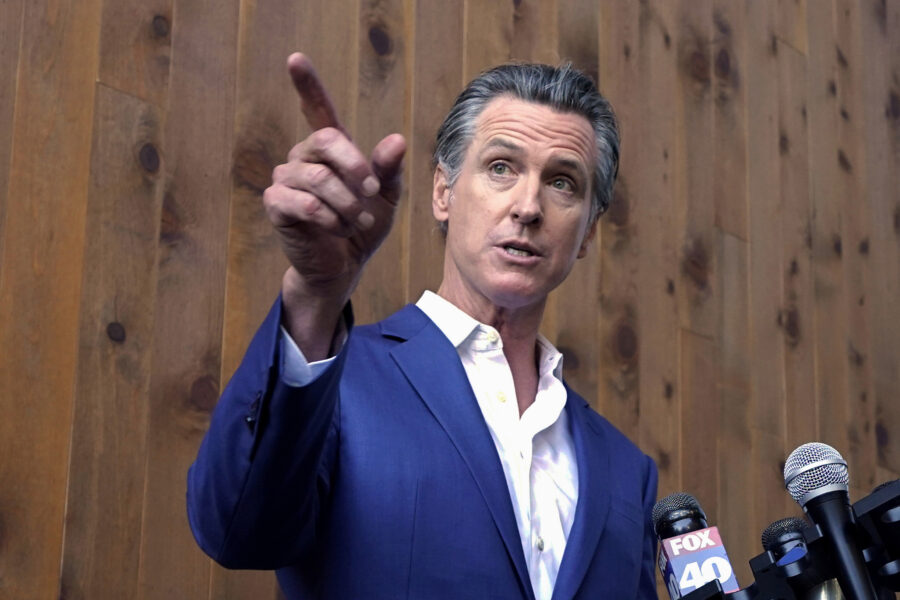 Gov. Gavin Newsom has quietly built a digital juggernaut as he coasts to reelection next month.

It’s another development sure to stoke speculation about his next move. But so far, the California Democrat has been using it for the benefit of others.

Newsom tapped his email list and fundraising events to help spread more than $6 million to other Democratic candidates and causes ahead of the election, advisers tell POLITICO, with much going to fellow gubernatorial candidates. He’s planning to do more for other candidates before Nov. 8.

On Saturday, Newsom will make his debut on the 2022 trail when he drops into New Mexico for an event with Gov. Michelle Lujan Grisham, who is being hammered over crime and the slow pace of the economic recovery by Republican Mark Ronchetti, a veteran TV broadcaster. The race has become sneakily competitive, and big-name Democrats are parachuting into Albuquerque, with President Joe Biden set to visit Nov. 3, after a recent stop from Vice President Kamala Harris.

Newsom also is spending the final week of the election stumping for House and other downballot candidates in his home state. So far, his political committees have given or raised nearly $3 million to candidates for governor and $430,000 more for the House, including in every competitive contest in California.

As Newsom’s imprint on the midterms takes shape, it also renews questions about his plans outside serving a second term at the Capitol, which would take him through 2026.

There’s been relentless chatter about his ambitions since last year when he fended off the recall against him and then began waging aggressive campaigns against the Republican governors of Florida and Texas — in addition to calling out fellow Democrats for being feckless in the face of growing attacks against them from the right.

Newsom’s team is increasingly cognizant that each of the moves he makes are viewed through the prism of a future presidential run, despite repeatedly professing his support for President Joe Biden in 2024 and pledging that under no circumstance would he challenge him.

But few Democrats find themselves in such advantageous positions. Newsom has raised $113 million since fighting the recall attempt, including about $20 million through the digital operation. Those are considerable sums for a state official. And they underscore that Newsom has been able to build what few others in the party can lay claim to: a major digital apparatus allowing him to play in 2022 despite mostly staying off the trail until late.

Newsom’s online footprint grew considerably in the last year and change. It’s been spearheaded by Tim Tagaris, one of the party’s foremost digital operatives who stood up Sen. Bernie Sanders’ (I-Vt.) pioneering fundraising operations in 2016. Newsom boasts an email list of more than 6 million names, up from 250,000 when Tagaris started ahead of the recall.

“It sucks that the far-right dragged the state through this recall, but the governor is stronger on the other end for it — and it’s helped him raise a bunch of money for other Democrats across the country, as well,” Tagaris told POLITICO in a rare, on-the-record interview.

“It’s pretty easy for federal candidates, particularly in tough Senate campaigns, to build strong and robust digital operations,” he added. “The ability to do it for non-federal candidates is just really rare.”

Newsom’s team started to build out his lists by focusing the digital content it produced on his work during the pandemic. Recent successful appeals centered around gun policy and other sweeping state legislation. Newsom’s team also has begun emphasizing text messaging as a way to expand its small dollar donor base, with the medium coming to rival email — a trend across campaigns that started taking off in 2020.

Newsom’s mobile phone list has grown to more than 1.5 million active supporters, according to Tagaris. And more than 1 million people in all have taken what strategists consider a concrete action online — either a donation, petition sign-up or volunteer shift or an RSVP for events. Tagaris said few campaigns prioritize using digital tools to help organize. But he contends it’s the only way to run a digital program at scale, particularly in a massive and expensive state like California.

For the midterms, Newsom tapped his texting network in support of Proposition 1, the measure in California to enshrine abortion rights in the state constitution. He also ran more than $2 million in TV ads on behalf of the measure, in place of a media campaign for his own walkover reelection bid. And he cut a second ad in recent days imploring voters to prioritize protecting democracy by voting Democratic.

Newsom plans to hit up Californains via text in the coming days to mobilize for crucial House seats.

“It’s one thing to talk about what you’ve done and why you think people are behind you,” Tagaris said. “But these numbers actually demonstrate support that really can’t be faked or made up.”