Barack Obama joked at a campaign rally in Milwaukee over the weekend that the state’s Democratic governor — Tony Evers, the bespectacled one-time science teacher mired in a neck-and-neck race for a second term — had “more of a Clark Kent” than a Superman vibe.

“But don’t let the glasses fool you,” Obama said, chuckling.

If anyone’s looking to be rescued in this final stretch before the midterms, it’s the Democratic Party. And it’s turning, yet again, to the 44th president to save them from freefall.

With Joe Biden’s poll numbers stuck in the low 40s, the sitting president has largely been absent from the trail in the final weeks of the campaign, opting for a mix of speeches from the Washington area and headlining fundraisers. Into the void stepped his former boss, who reminded crowds over the weekend that he remains — far and away — his party’s most effective surrogate. 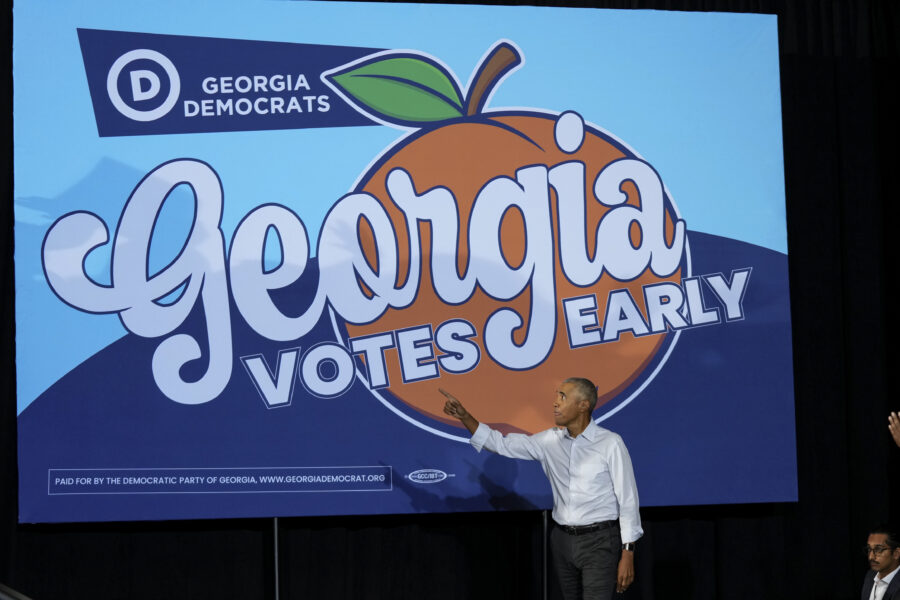 Nobody is more in demand than Obama. His team was inundated with requests to speak, with Democrats imploring him to cut brief get-out-the-vote videos and congressional leaders leaning on him to headline fundraisers with them. It harked back to times when, as president, Obama would issue endorsement lists that delved so far down the ballot that some of the announcements more closely resembled a phone book than a standard news release.

Obama hit a trio of battleground states over two days to rally the base for Senate and gubernatorial hopefuls in tough races. On Tuesday, he’ll be in Nevada to do the same, before heading to Phoenix on Wednesday and then Pennsylvania alongside Biden on the final weekend before Election Day.

Obama’s closing act is something of a role reversal for the former and current president compared with past years. It was often Biden and his everyman appeal that was most appreciated in some of the nation’s tightest races, particularly those for the House. While Biden aides insist he’s largely succumbed to the reality that his services are a better fit at the moment in blue states — places such as Oregon, California and Maryland, where he’s set to appear for the second time — he’s publicly bristled at the suggestion that campaigns want him to stay far away from them.

Even as he stars as the party’s biggest draw and chief base motivator, there’s an unmistakable fear that even he can’t prevent what may end up being inevitable bloodletting on Nov. 8. Some Democrats also contend that for all his considerable talents to drive an argument, even Obama has struggled in the past to translate his own popularity and successes onto others in his party. Democrats suffered heavy losses in both midterms of Obama’s presidency.

Still, most in the party agree there’s nobody they’d rather have. And public reaction has been quite positive. A single clip of Obama on the stump on Saturday accusing Wisconsin Sen. Ron Johnson of protecting his wealthy associates while putting Social Security in jeopardy notched more than 12 million views. His depiction of Herschel Walker as a football legend who has no business serving in the Senate led newscasts in Georgia, where Sen. Raphael Warnock is trying to hold off the Republican’s late surge.

After stumping in Georgia for Warnock and Stacey Abrams, Obama video chatted with Rep. Karen Bass, offering his support to the longtime Democrat who is being pummeled by $100 million in advertising by the developer Rick Caruso in the Los Angeles mayoral race. 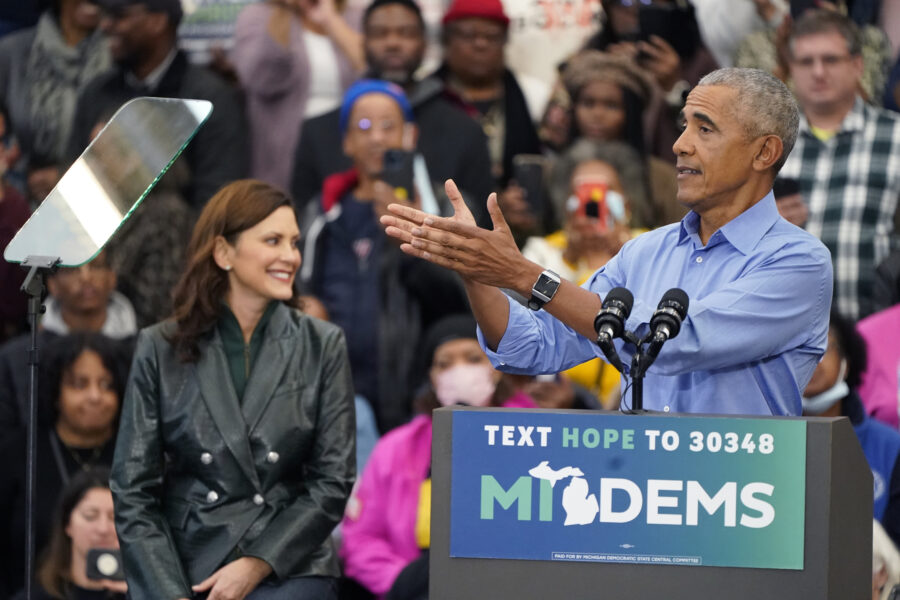 Doug Herman, a Democratic strategist helping guide Bass’ campaign, said Obama brings a voice of “pragmatism, hope and common sense that has been in short supply since he left office.”

“His endorsement is the most powerful for any Democrat running in a contested race,” Herman said of the former president. “That’s likely why he has been getting involved in the closest races.”

It was no secret that Obama would help drive attention to those races. But it’s been his articulation of the other side that’s dominated headlines. In Michigan, campaigning for Gov. Gretchen Whitmer, Obama described a Republican Party utterly enthralled with Donald Trump to the point of obsession.

“These days just about every Republican politician seems obsessed with two things: owning the ‘libs’ … and getting Donald Trump’s approval,” Obama said at the Detroit rally.

In Wisconsin, Obama sarcastically waxed nostalgic about the days when Trump wouldn’t let go of the birther conspiracy and the idea that Obama was not eligible to be president. “Remember that that was the craziest thing he was saying?” Obama said, never mentioning Trump by name. “Now, it doesn’t even make the Top 10 list of crazy.”

And in Georgia he dismissed Walker — whose gridiron days as a Georgia Bulldog still stirs positive associations in the state — as “a celebrity that wants to be a politician,” before adding that being “one of the best running backs of all time” didn’t make him fit for public office. Obama joked that few wanted his “slow, old skinny behind” being pursued on the field by a defensive tackle.

He also spoke to the bouts of fatalism that have coursed through his party since they took power nearly two years ago and struggled to pass legislation with their slim majority — amid a sluggish economic recovery and worsening threats to America’s institutions.

“I get why people are anxious. I get why you might be worried. I understand why it might be tempting just to tune out, to watch football or ‘Dancing with the Stars,’” Obama said. “But I am here to tell you that tuning out is not an option. Despair is not an option. The only way to make this economy fairer is if we, all of us, fight for it. The only way to save democracy is if we, together, nurture and fight for it.”