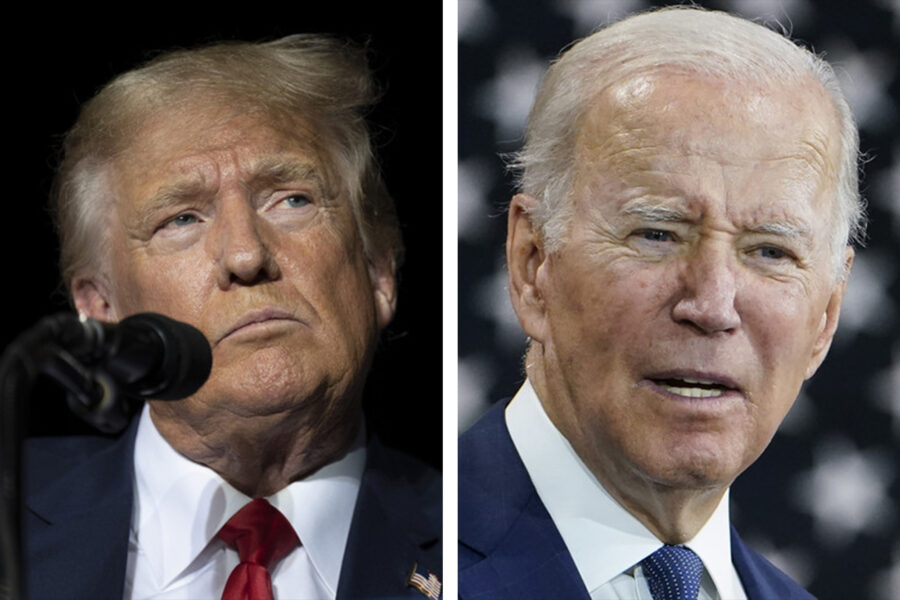 After criss-crossing the country for the midterms, Joe Biden and Donald Trump will find themselves ending the campaign on common ground in Pennsylvania.

The must-win battleground has emerged as a proxy fight between the two men. It’s the rare state where both are appearing, culminating in final weekend showdowns when Biden is expected to join former President Barack Obama and the Democratic ticket while Trump rallies with the Republicans in the western part of the state.

The stops foreshadow a likely 2024 rematch and escalate the posturing between the two that’s been simmering since Biden vanquished Trump two years ago, thanks in large part to reclaiming Pennsylvania.

While their paths seldom cross so obviously, Biden has used Trump’s probable return to ground his own reasoning for potentially running again. Trump, meanwhile, is using Biden’s shaky standing in the polls as a springboard for himself, despite myriad investigations and legal troubles following the former president.

Their teams are acutely aware that the success of any future campaign would again heavily rest on success in Pennsylvania. They are keen on keeping roots there. And yet, the late campaign swing through the state also threatens to showcase their current vulnerabilities.

“Presidents can raise money, and that’s really all you want him to do right now, is vacuum up some bucks and sneak out of town,” said Rick Santorum, a Republican former U.S. senator from Pennsylvania. “It’s like with Trump — he would be much more effective if he came in to raise money and left. But Trump and Biden, both of whom have huge egos, want to feed that ego.”

As one of the country’s most pivotal swing states, Pennsylvania grabs outsized interest from any potential presidential aspirant. Biden and Trump, who beat Hillary Clinton there in 2016, are no different.

Each of the men began the fall campaign season with Labor Day stops in Pennsylvania. Trump helped boost the Republican gubernatorial candidate, Doug Mastriano, a state legislator who attended the Jan. 6 rally and won the former president’s endorsement by amplifying lies around the 2020 election results in the state. Trump raised the stakes for himself further there in the Senate race by endorsing celebrity Dr. Mehmet Oz, who eked out a primary win and is now locked in a close race with Democrat John Fetterman, himself one of the few Senate candidates from a battleground state who is comfortable standing alongside Biden at political events.

Biden advisers, close allies and others working in the state continue to believe that his presence there down the stretch will translate into a net positive for Democrats, despite a consistent drip of public and private opinion polls showing his approval ratings hovering around the mid-40s. They point to his roots in Scranton and what they view as an extraordinary sense for the state’s mores and political climate.

“Pennsylvania is personal for him. He really considers it home. He knows it better than anywhere. And he relates to those voters,” said Celinda Lake, a pollster for Biden’s 2020 presidential campaign.

Trump aides downplay the idea that he has more intense interest in Pennsylvania than other states, noting that he’s also hosting upcoming rallies in Iowa, Ohio, and Florida, and that his super PAC is placing seven-figure ad buys for the Senate in places like Georgia and Arizona. But they also view the late campaign stop as a chance to cement his image as the party’s preeminent kingmaker.

“Trump coming to town serves no benefit to Mastriano and it might help Oz continue to solidify his base. Republicans still aren’t all home yet because they question if he is truly a conservative or is just paying lip service to it,” said one longtime Republican operative in the state who was granted anonymity to speak candidly about the race.

As a matter of sheer footprint, Biden has invested more in Pennsylvania than Trump. His two more upcoming swings through Pennsylvania — which may not be his last this cycle — will be his 21st and 22nd visits to the state, according to a tally of travel by Mark Knoller, the unofficial longtime record keeper of the White House press corps. Biden has visited the other battlegrounds of Wisconsin just four times, North Carolina three, Georgia three and Nevada just once.

On Friday night, Biden and Harris will give speeches at the Pennsylvania Democratic Party’s annual Independence Dinner, which will be attended by the candidates at the top of the state’s ticket. The event is expected to raise $1 million for the state party, party officials said.

Through his control of the Democratic National Committee, Biden has also helped quadruple the investment in Pennsylvania compared to the 2018 election cycle, though there was not a hotly contested Senate race that year. Democrats are sending far more money to the state party as well, which helps fund core infrastructure, operations and data.

Those investments could go a long way to helping the party squeak out a win for Fetterman. For months now, Biden has regularly sought updates from aides and associates about the Senate race, according to three people who have spoken with the president in recent weeks. The most common answer he’s gotten is ones he easily could have intuited on his own: It’s very close and is expected to stay that way until the end.

White House officials and outside Biden advisers have closely monitored Fetterman’s recovery process from a stroke five months ago. Some have privately shared concerns even as the White House publicly insisted that the lieutenant governor was just as capable of mounting a winning campaign as he’d always been.

But those concerns intensified this week after a lackluster debate performance by Fetterman highlighted his speech challenges following the stroke. And others have thrown up their hands in frustration as Fetterman’s lead over Oz diminished under an avalanche of attacks over urban crime.

“I don’t understand why we’re not fighting back more effectively on crime,” said Ed Rendell, the former Democratic governor of the state, who recently joined Biden at the fundraiser for Fetterman’s campaign. Rendell said attempts to push back haven’t been forceful enough — and he stressed that his critique of the crime issue extended to the White House, on down. “We’ve ceded that to [Republicans] too easily. We’re afraid to talk about it.”

The White House takes some solace in the governor’s race, where state Attorney General Josh Shapiro, the Democrat, seems poised for a relatively easy win. Indeed, Mastriano is viewed as such a potential drag on Oz that Fetterman’s campaign has increasingly tried to link the two Republicans together. In a rapid-response ad the Democrat released following the debate, he mentioned Mastriano in a clip of Oz saying he wanted “local political leaders” involved in abortion decisions.

“When you say you want to put ‘local political leaders’ in charge, [elected officials like] Mastriano are the local leaders he’s supporting,” said Pennsylvania state Rep. Malcolm Kenyatta, a Democrat who competed in the U.S. Senate primary and now supports Fetterman. He added that Oz and Mastriano are “connected and they have always been. This is a package deal.”

But Democrats aren’t pinning their entire strategy on Mastriano being an anchor around Oz’s neck. And the party is hopeful that the Biden-Obama tandem will motivate base voters.

“Right now, it’s a lot of noise, a lot of nonsense, but he has a record of success he’s been able to push through with the slimmest majorities,” Kenyatta said of Biden. “People are frustrated with Washington, but that doesn’t mean they are disappointed with the president, per se.”

Trump’s bet in Pennsylvania is that Biden will be the drag on the ticket that Democrats believe Mastriano is for Republicans. In announcing his stop in the state, the former president derided his successor’s approval ratings. The day after the Oz-Fetterman Senate debate, the Trump-backed Make America Great Again, Inc. super PAC dropped over $800,000 on an ad that linked Biden to Fetterman and called them both “clueless” and “weak.”

Overall, the group has spent $2.6 million in the state.

Trump’s eyes have not just been on 2022, however. Pennsylvania was one of a handful of states whose election results he unsuccessfully tried to overturn. And more recently, Trump allies have plotted to target mail-in voting laws in the state that they say, without evidence, contributed to his loss in 2020. In September, Trump met with a group of Republicans at his office in Trump Tower who asked him to push state legislators to repeal Act 77, which allows for no-excuse mail voting in Pennsylvania.

News of that meeting has led to concerns Trump is trying to reshape state laws on voting ahead of the midterms — and also any potential presidential run. But a person close to the effort to repeal Act 77 from the election code said there are currently no plans to get a motion on the ballot before the end of the current legislative session.

Trump’s trip to the state is, in part, to try and change that dynamic, in addition to boosting Oz among a still somewhat skeptical GOP base before election day. But, like Biden, he will be measuring his own standing in Pennsylvania too. The question for some veterans of the state’s political scene, is whether they will do more harm or good.

“It’s election season, and if you can get a former president or a president to come in you do it,” said Ryan Costello, a former Republican representative and Trump critic from outside Philadelphia. “But I don’t think voters are saying ‘Oh, great President Biden is here.’ And on the flip side, undecided voters I don’t think are saying ‘I really miss Trump, let’s go for his guy.’ … I think a lot of voters will be looking at it and say I don’t want a 2020 choice in 2022. I want a new person.”

Adam Cancryn contributed to this report.