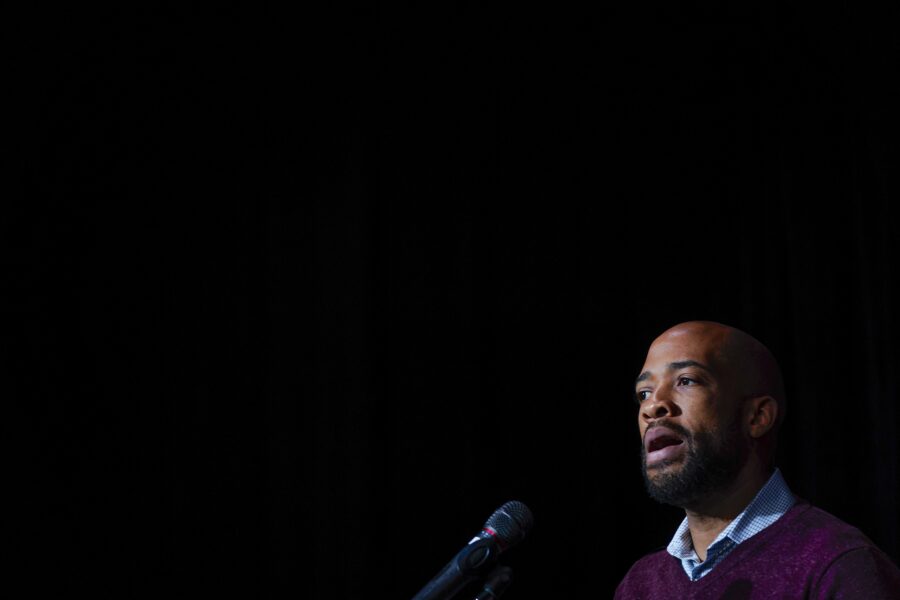 MILWAUKEE — There’s a potential nightmare brewing for Democrats here in a birthplace of progressivism: Ron Johnson, the conspiracy-peddling MAGA adherent, could be on his way to clinching a third term in the Senate.

Even Mandela Barnes, his Democratic opponent, sees the risk.

“Going into it, we knew it would be tight, regardless of how ridiculous Ron Johnson has been,” the Democratic Senate nominee said in an interview before a round of rainy fall door-knocking.

After two cycles of failing to take Johnson out, Democrats are throwing some star power and a lot of cash into the state. Forget Johnson’s musings on Covid-19 vaccines, widespread voter fraud in the 2020 election and Hunter Biden, Democrats are bringing former President Barack Obama to this lakeside city on Saturday and spending millions on the airwaves to fight for a Barnes victory in a hostile national environment.

And with Barnes raising more than $20 million in the third quarter to Johnson’s $12.3 million, the Democratic campaign says it will spend nearly twice as much on television and broadcast in October than it did in September. Still, party officials fear its best efforts won’t be enough to topple its top-targeted Senate incumbent, imperiling its ability to hold on to the majority.

Whether the Democratic dollars will be enough to deliver a Barnes victory is uncertain, after his summer polling lead evaporated after Republicans pummeled him over the airwaves in September. Rep. Mark Pocan (D-Wis.) said while the Democratic cash is helpful, “it would have been nice if we had the resources to get that message out a month earlier.”

“The biggest challenge is that people don’t know who Mandela Barnes is. They just don’t know his story,” added State Treasurer Sarah Godlewski, who ran against Barnes in the primary but withdrew before the election. “The other side has been defining him and I think we’re really changing that. He’s going out there and telling his story.” 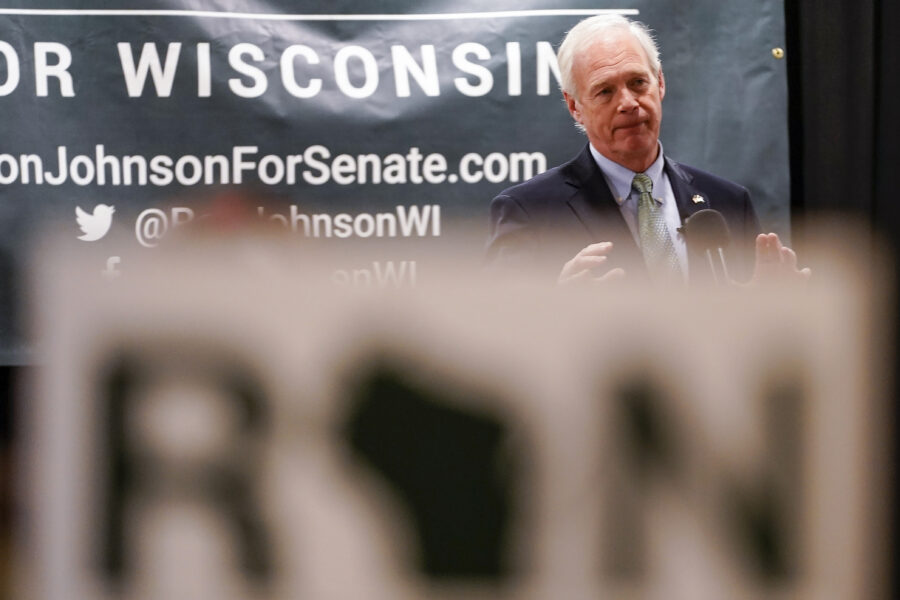 A Republican close to the Johnson campaign said that it’s concerned about the influx of cash from Democrats and has made that known to national party leaders. That GOP official said the opposing party has “Ron Johnson derangement syndrome” and Democrats have “never been able to accept the fact that, guess what, the people of Wisconsin have picked” him. Chris Hartline, a spokesperson for the GOP campaign arm, said it’s been on air since May and remained confident in a Johnson victory.

The Johnson campaign did not make him available for an interview.

Barnes came up in progressive politics as a leader in Wisconsin’s Working Families Party, a progressive party, before being elected the state’s first Black lieutenant governor in 2018. While the Badger State has elected pragmatic progressives like Baldwin, it’s almost evenly divided between the parties. President Joe Biden and former President Donald Trump each won the state by less than a percentage point.

Mark Becker, a former GOP chair for Brown County who left the GOP amid Trump’s rise and now supports Barnes after backing Tom Nelson in the primary, said his primary opponents “all understood and knew that these ads [were] coming.”

“If [Democrats] can’t beat someone like Ron Johnson, you know, it kind of goes to who we nominate … in these elections,” he said. “If you keep trying to nominate the most progressive of progressives, you will not have success in Wisconsin.”

In 2016 Johnson actually outran Trump. The senator’s 3-point victory even surprised Republicans, who never fully committed to the race as they invested in races that seemed more favorable.

Johnson has repeatedly painted Barnes as a “radical leftist,” including in remarks to a reporters after a closed-press event at the Beloit Chamber of Commerce this week. “He has radical views on most issues,” Johnson said. “This campaign literally pits truth … versus lies and character assassination.”

And GOP attack ads cite Barnes’ support for ending cash bail and accuse him of wanting to “defund the police” and abolish Immigration and Customs Enforcement — a typical campaign narrative against progressives. Barnes previously expressed support for reducing police funding and liked tweets about abolishing ICE, but he maintains that he does not support defunding the police or abolishing the immigration agency.

Mitch Reynolds, mayor of La Crosse and a Barnes ally, said that while the Wisconsin Democrat have a positive message, “it’s hard to deny [the GOP ads] have an impact,” even as he described them as “garbage.” Barnes’ allies, including Angela Lang, executive director of Black Leaders Organizing for Communities, describe some of those GOP ads as racist, as they label the Democrat “different” and “dangerous.” 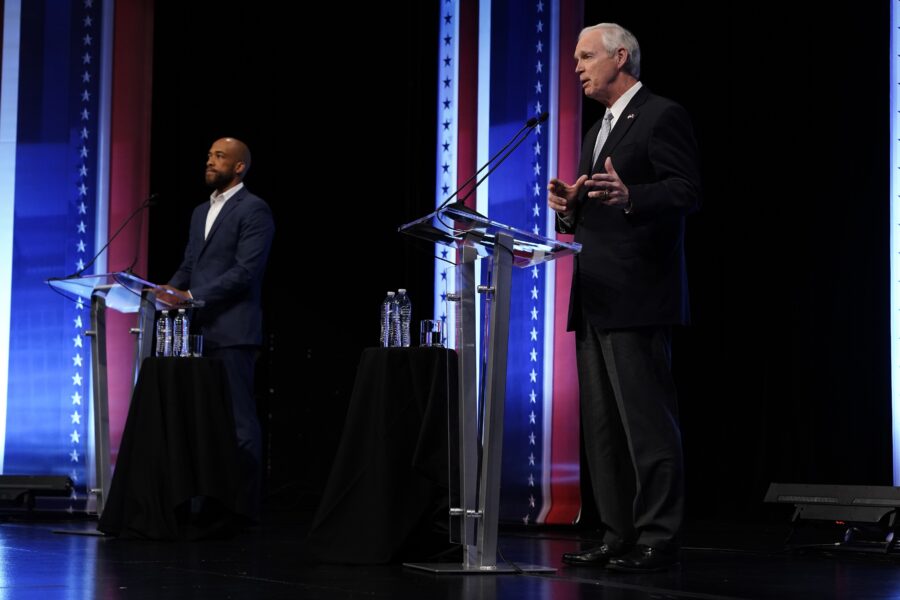 When asked whether his position to end cash bail has hurt him, Barnes responded that his policy “makes communities safer, it means people can’t just buy their way out of jail.” Barnes wouldn’t say whether he’d support Senate Majority Leader Chuck Schumer or if Biden should run for reelection. And his campaign has emphasized he’s focused on kitchen table issues.

As for his standing in the race, Johnson told supporters at a telephone town hall this week to view it as “dead even,” noting that “the only consistency in the polls in my Senate races is that they’ve been wrong.” Polls have shown Barnes leading by as many as 7 points this summer, and losing by as many as 6 points this fall.

Barnes would be the state’s first Black senator if he wins, but first he needs to turn out Black voters in Milwaukee, something Democrats hope Obama’s visit will help. Barnes is focusing closely on the city, using the first day of early voting to knock on doors here and canvassing at Sherman Phoenix, an incubator for Black-owned businesses.

In the closing weeks, the party is betting big on abortion, with Democrats highlighting that women are outpacing men in new voter registrations. Wisconsin currently has an abortion ban in effect, originally enacted in 1849, and Democrats have spent $10.7 million on abortion ads alone, per Ad Impact.

State Sen. Lena Taylor, who represents part of Milwaukee and who Barnes unsuccessfully challenged in a 2016 primary, said “progressives have been his base since he’s come to the political scene” and that his campaign has “hung its hat on the women’s vote,” with the overturn of Roe.

“On the ground that doesn’t always resonate with the populations that one needs to move because in order to get Milwaukee it is mostly Black and Brown people,” she said. “And I wouldn’t say that women’s rights are necessarily always a number one issue for us,” noting “we have a conservative streak in us … because of our faith community.”

Democrats underestimated Johnson in the past, even as they attribute his electoral success to good fortune. Johnson defeated former Sen. Russ Feingold in 2010, with the Tea Party wave, and again in 2016, the year Trump became the first Republican to win Wisconsin since Ronald Reagan.

But maybe he’s a better candidate than Democrats are willing to concede. Bill McCoshen, a Wisconsin-based Republican strategist, said the biggest difference this cycle is Johnson was behind in mid-October polls in 2016.

“He’s flipped the script completely, that doesn’t happen by luck,” he said, referring to the current cycle.

Baldwin acknowledged that her fellow Wisconsin senator’s side has “tailwinds,” but cited a CNN poll that only had Johnson up by one point, compared to other GOP incumbents with much stronger leads.

“I don’t think that speaks to someone who has a huge command,” she said.