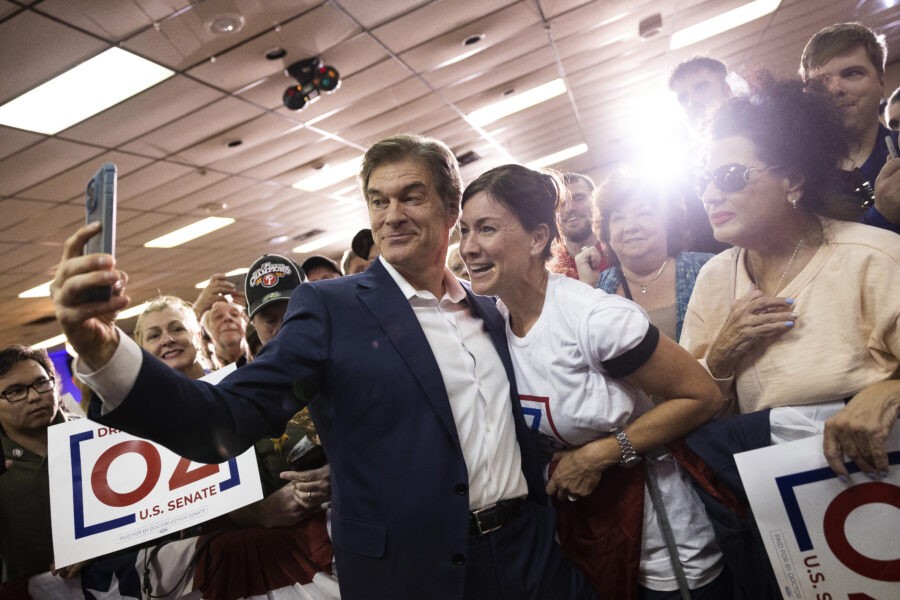 Senate Republicans are in their best position in months to net the one seat they need to flip control of the chamber next year — on the eve of the midterms, no less.

Claiming even that one needed seat looked like a Herculean task this summer as GOP candidates, several of them blessed by Donald Trump, struggled in must-win races across the map. Those struggles now mostly behind them, Republicans finally feel optimistic thanks to a late-game spending surge and a deteriorating national environment for Democrats.

The biggest boost for the GOP is in Pennsylvania, where Democrats’ monthslong lead has nearly evaporated: Mehmet Oz now has at least a decent chance of winning after Democrat John Fetterman grappled with symptoms from a May stroke during their lone debate and faced a cavalcade of attack ads. Whichever party wins that state will have multiple pathways to the majority.

In other battleground states, Democratic incumbents Catherine Cortez Masto of Nevada and Raphael Warnock of Georgia are trying to hold on, while the GOP shows late momentum against Democratic incumbents in Arizona and New Hampshire. Democrats could yet defy conventional wisdom and expand their majority, but Republicans are starting to predict a takeover.

“Chances at this moment are very, very strong,” said Iowa Sen. Joni Ernst, a member of GOP leadership. “I’m just going to say: We’re going to get the Senate next Tuesday.”

Even getting Senate control doesn’t mean a major sweep, of course, and Republicans are declining to predict one with good reason. Democrats’ prospects are getting buffeted by economic and political headwinds, but they’re still benefiting from underfunded and second-tier GOP candidates as well as whopping fundraising numbers from their nominees.

One GOP senator, granted anonymity to candidly assess the party’s chances, said “it won’t be a red wave, as people were predicting early on. But it won’t be a blue wave either. It might be a red ripple.”

Democrats look nearly certain to lose the House at the moment, but their leaders are hoping to reprise the 2018 midterms with a split result between the two chambers. During that cycle, the GOP House majority crumbled under former President Donald Trump but Senate Republicans ended up netting two seats.

That looked more doable over the summer. The Democratic Party warned for months that its big leads then were illusions, that races would tighten as GOP voters come home to their candidates and super PACs empty their bank accounts. Democratic leaders are projecting optimism today.

Democratic Senatorial Campaign Committee Chair Gary Peters still believes not only that “we will retain the majority, but I do believe we’ll pick up” a seat or two.

“All of our races are in battleground states and by definition a battleground state is a very close election that comes down to the wire,” the Michigander said. “I feel very good about where we are. We have a very clear contrast in every single one of these races between our Democratic incumbents and the Republicans they are running against.”

Yet once clearly favored to win, Fetterman is now in a coin-flip race. Sens. Mark Kelly of Arizona and Maggie Hassan of New Hampshire have seen their leads shrink as Election Day approaches. Warnock and Cortez Masto are the most vulnerable incumbents on the map, and the Georgia race may even go to a runoff, which could determine control of the chamber depending on results in other races.

Democratic officials are acknowledging out loud in growing numbers that they face a tough national environment where historical trends don’t favor the party that occupies the White House.

Things usually are “going to go in the direction against the current president,” Sen. Tammy Baldwin (D-Wis.) said, and it’s “the exception when it doesn’t.”

If there’s a great night for Republicans, it could reach into Arizona and New Hampshire. Republicans Blake Masters and Don Bolduc are still underdogs, yet running more closely to Kelly and Hassan than several weeks ago.

This week, a St. Anselm poll showed Bolduc slightly ahead of Hassan for the first time, while Kelly generally leads Masters by just a handful of points. In Arizona, Libertarian candidate Marc Victor endorsed Masters this week, which could tighten those numbers further.

“I do think Blake’s gonna pull it off. And I do think Bolduc’s really darn close,” said Jessica Anderson, who leads the conservative Sentinel Action Fund, which has spent late in both races.

Dave Carney, a New Hampshire-based national Republican strategist, said the tightening Granite State Senate race is a bad sign for Democrats nationwide ahead of Tuesday. Carney contended that Hassan, Biden and Democrats around the country have not taken a sufficiently sympathetic tone when discussing economic challenges people are facing.

“People my age and younger — we have never had the president of the United States, the leader of the free world, tell us to buy fucking generic raisin bran. That’s his solution,” Carney said, referring to comments from Biden last week when he suggested Americans may no longer be able to afford “Kellogg’s Raisin Bran.”

Peters said that the Supreme Court decision overturning federal abortion rights and subsequent new voter registrations by women voters “will be a difference maker in the end” in some tough races. Democratic Sens. Patty Murray of Washington and Michael Bennet of Colorado are both reliably leading their races going into the election.

Still, there’s a growing recognition in both parties that while the abortion issue changed the landscape, it’s not a cure-all for Democrats. Sen. Bernie Sanders (I-Vt.) said that while every Democrat should be speaking about abortion rights, the party needs to also “focus on corporate greed. You have to talk about the grotesque level of income and wealth inequality.”

And Republicans say that abortion-focused campaigns have not overcome concerns over inflation: “There’s no more, ‘It’s all about abortion,’” Ernst said. “Because it’s not.”

Despite President Joe Biden’s low popularity, candidate quality remains an anvil for Republicans and the ultimate effect of the abortion decision is more of a wild card than the GOP asserts. Polling averages show Fetterman holding a narrow 1-point lead over Oz, who faces deep unfavorability ratings. Fetterman led in all three polls released Wednesday. And in both Nevada and Georgia Senate races, each party’s nominee for months has traded off the lead.

Winning either of those seats would be game-changing for Democrats.

“Some of these Republicans would have trouble getting elected dog catcher, and in this kind of midterm environment that’s helped keep Senate Democrats well positioned to win,” said David Bergstein, spokesperson for the Peters-run campaign arm.

Ben Wikler, chair of the Wisconsin Democratic Party, contended that Barnes’ recent fundraising boon puts his challenge to Johnson “back in nail-biter territory.” But even so, he said, “the president’s party almost always loses ground in Wisconsin, no matter which party holds the presidency.”