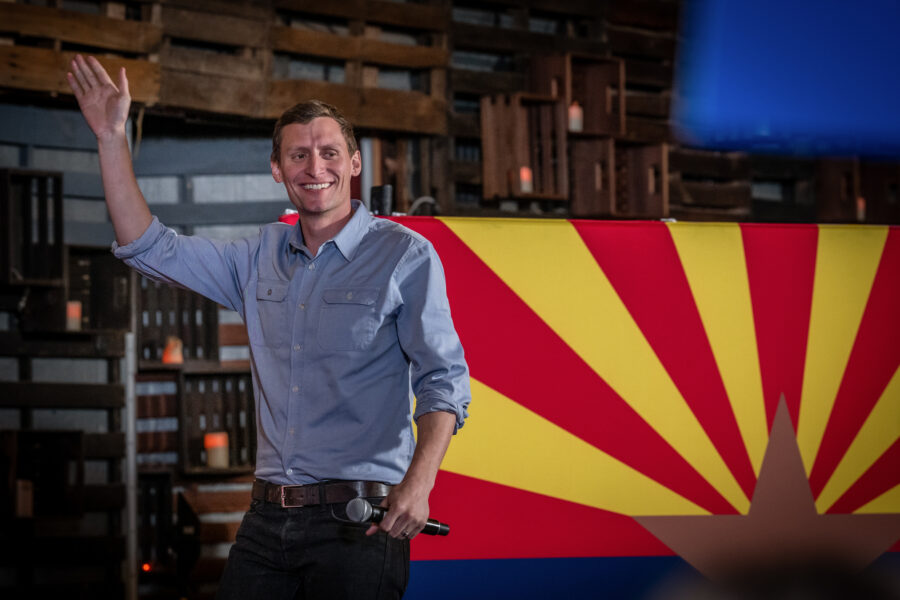 Democrats’ threadbare Senate majority is on the line Tuesday as voters cast their ballots in a slate of suspenseful contests whose outcome will dictate the rest of President Joe Biden’s term.

The battle for control of the chamber reached election night at the same deadlock it’s been in for much of the past two years: with neither party gaining a clear upper hand, and prognosticators and lawmakers at a loss over how it would end.

“We know we’re competitive in a lot of races and that there’s enough seats that we could add to our majority,” said Sen. Ben Cardin (D-Md.). “We also recognize that we’re at risk.”

Republicans need a net gain of just one seat to flip the chamber, which is currently split 50-50 and controlled by Democrats only because Vice President Kamala Harris provides the tiebreaking vote. Going into Election Day, POLITICO rated races in Pennsylvania, Nevada, Georgia, Arizona, New Hampshire and Wisconsin as toss-ups.

With the House favored to flip to Republicans, the party that controls the Senate for the next two years will play a decisive role in spending battles and the confirmation of Biden’s judicial and executive branch nominees. If Republicans win back the Senate, the GOP will have the unilateral ability to block Biden’s nominees, who need only a simple majority for confirmation.

A GOP Senate would also likely use committee gavels to conduct oversight investigations. If Democrats retain control, they are expected to intensify their efforts to confirm judges and executive branch nominees and promote other Biden administration policies.

Senate Minority Leader Mitch McConnell has previously said that Republicans’ goal would be to “make sure Joe Biden is a moderate,” suggesting the GOP would be a check on the president. There are several ways McConnell could act as such a check — the GOP leader has not yet said how he would handle any possible Supreme Court vacancy next year, if Republicans take power, after the major 2016 dispute over his refusal to consider Supreme Court nominee Merrick Garland.

The GOP has seen momentum in recent weeks, with late-breaking voters shifting to the Republican column citing concerns over inflation and the economy. FiveThirtyEight’s polling average shows the party slightly favored to win the upper chamber and leading narrowly on the generic congressional ballot.

Republicans have especially made inroads in Pennsylvania, where polls show a dead heat race between Republican TV star Mehmet Oz and Democratic Lt. Gov. John Fetterman who are vying for an open seat. Fetterman suffered a stroke in May that has affected his auditory processing and speech and kept him off the campaign trail for most of the summer. His GOP opponent is a celebrity doctor with a daytime TV following and the backing of former President Donald Trump. Oz had significantly trailed Fetterman for months.

In Georgia, Sen. Raphael Warnock (D-Ga.) and GOP nominee Herschel Walker are also neck and neck. If neither candidate clears a simple majority, the race will head to a December runoff. And in Nevada, Sen. Catherine Cortez Masto (D-Nev.) is in a tight race against GOP opponent Adam Laxalt, who on average has a slight lead in the polls.

In the perennial swing state of Wisconsin, Sen. Ron Johnson (R-Wis.), has opened up a small lead against Democratic Lt. Gov. Mandela Barnes. And in Arizona and New Hampshire, Sens. Mark Kelly (D-Ariz.) and Maggie Hassan (D-N.H.) have seen their races tighten against GOP opponents Blake Masters and Don Bolduc.

The political party that controls the White House usually suffers during midterm elections as voters punish Congress for any dissatisfaction with the president. Republicans have tried to make sure this election is a referendum on Biden, whose approval ratings are underwater, focusing particularly on high inflation, crime and immigration.

Democrats, meanwhile, are hoping that their signature health, tax and climate bill passed in August, combined with voter anger over the Supreme Court’s overturn of Roe v. Wade, will be enough to buck historical trends against the party in power. Ahead of the election, Democrats highlighted an uptick in voter registration among women in some states over the summer as a positive sign. And their Senate candidates have outraised their Republican opponents in key races.

However, in recent weeks there have been signs that Democrats’ bump from the spotlight on abortion rights has diminished as more kitchen table issues like gas prices and crime rates have dominated the political debate. The gender gap in voter registrations in the immediate aftermath of the court’s decision was not sustained into the fall.

This may turn out to be one of the most expensive midterm election seasons in history, with both parties spending big. According to AdImpact, Democrats spent $773 million on ads during the general election, compared with Republicans’ $674 million, as of Tuesday morning.

The map is set to get only more difficult for Democrats in 2024, when they’ll need to defend 23 Senate seats, including in the red states of Montana and West Virginia, as well as in Ohio, Nevada, Pennsylvania, Wisconsin and Arizona.