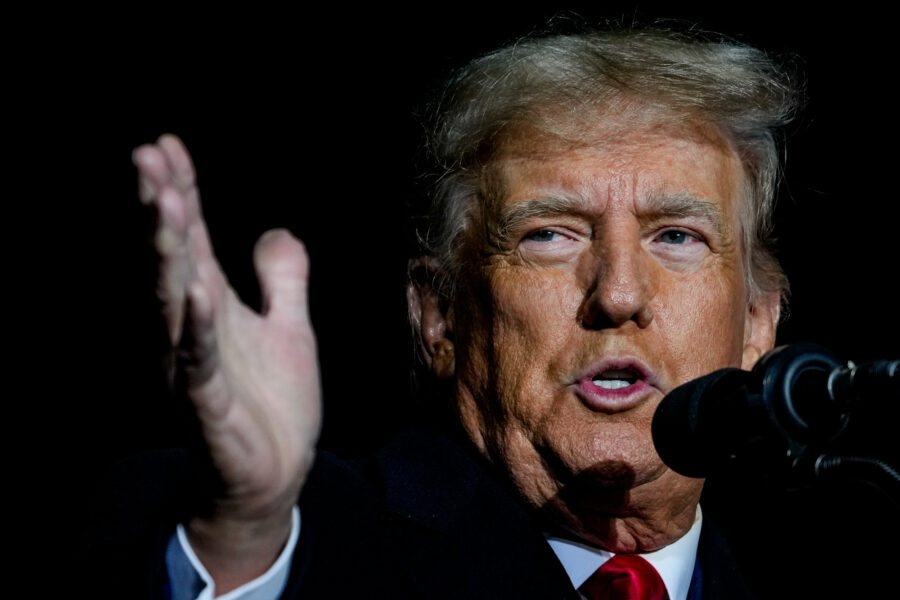 President Joe Biden stayed away from the toughest races on Election Day eve, opting to campaign in safe Democratic territory before what’s expected to be a difficult night for his party.

“It’s going to shape what the next couple decades look like,” Biden said of Tuesday’s results, to the crowd at Bowie State University. “For real.”

Biden’s not the only one playing on what should be friendly turf as voting nears. First lady Jill Biden headed to Northern Virginia, where she campaigned with Rep. Jennifer Wexton (D-Va.) in a congressional district the president won by nearly 20 points in 2020. Meanwhile, former President Donald Trump rallied alongside Republican J.D. Vance on Monday evening in Dayton, Ohio, a deep-red state where Democrat Tim Ryan has forced a tighter contest for the open Senate seat.

“Tomorrow, you must vote Republican in a giant red wave that we’ve all been hearing about,” Trump said, after walking straight from a Trump-branded plane onto the rally stage in Dayton.

Projecting confidence to Vance and the crowd, Trump said, “J.D., you have some real good polls, I saw today. What the hell am I doing here? Goodnight everyone” and feigned an exit.

The late campaign swings underscored how Tuesday’s midterm election could dramatically reshape the makeup of Congress and statehouses across the country. Democrats are on defense in blue-leaning House seats while Republicans are eyeing supermajority control in statehouses, like in North Carolina and Wisconsin. House Republicans need to net only five House seats to flip the chamber, while an evenly divided, 50-50 Senate means the GOP needs to turn a single seat to take over.

Public polling shows margin-of-error races throughout the country, particularly in the Senate, as operatives in both parties anxiously watch how swing voters may break on Tuesday. In recent weeks, Republicans have narrowed or surpassed Democratic candidates in a handful of races, from Georgia to Arizona to New York.

Biden, along with former President Barack Obama, rallied in Pennsylvania on Saturday evening for one of the highest-profile races: the contest between Democrat John Fetterman and Republican Mehmet Oz. The president has centered much of his final campaign schedule on rallying against election deniers, including in that rally, when he told voters: “We need to reaffirm the values that have long defined us.”

“We are good people,” Biden continued. “I know this.”

Biden’s focus on defending democracy comes as Americans vote for the first time since the insurrection on Jan. 6, and as a number of election-denying candidates seem poised to win office on Tuesday.

Trump, who continues to deny the result of the 2020 presidential election, said Monday night in Ohio: “The vote counter is more important than the candidate.”

But many voters, according to public and private polling, consistently cite economic concerns, like the soaring cost of living, as the top issue that will determine their vote.

That’s prompted an early round of recriminations from inside the Democratic Party about its messaging, as operatives and candidates alike brace for a difficult night. One of Biden’s pollsters, John Anzalone, told The Wall Street Journal, for whom his firm conducts polling, that Republicans appear on track to make gains with not only Latino voters but with Black voters, too.

“I think that this could be a paradigm-shift election,” Anzalone said.

Democrats have also run heavily on the issue of abortion rights, following the Supreme Court overturning Roe v. Wade. And the party is hopeful that a wave of new female voters could help them have a better night than expected.

Early voting totals already show high levels of interest in the 2022 midterms, as Americans cast more ballots ahead of Election Day this year than they did ahead of the 2018 midterms, according to data collected by the United States Elections Project. But those numbers are often not reliable predictors for how an election may go and could merely be a sign that voters are more comfortable with in-person early voting or mail balloting, vote casting that became even more popular during the coronavirus pandemic.

As of Monday morning, more than 40 million total early votes had been cast. In 2018, 39.1 million ballots were cast early.

Still, election officials across the country are warning Americans that results in some states may still be slow, which could cause delays in calling races. Some states, like Pennsylvania, are not allowed, by law, to count mail-in ballots until after Election Day is over, slowing the counting process like it did in 2020. Others, like North Carolina, are processed quickly because the state’s early and absentee ballots are processed as soon as they are received.