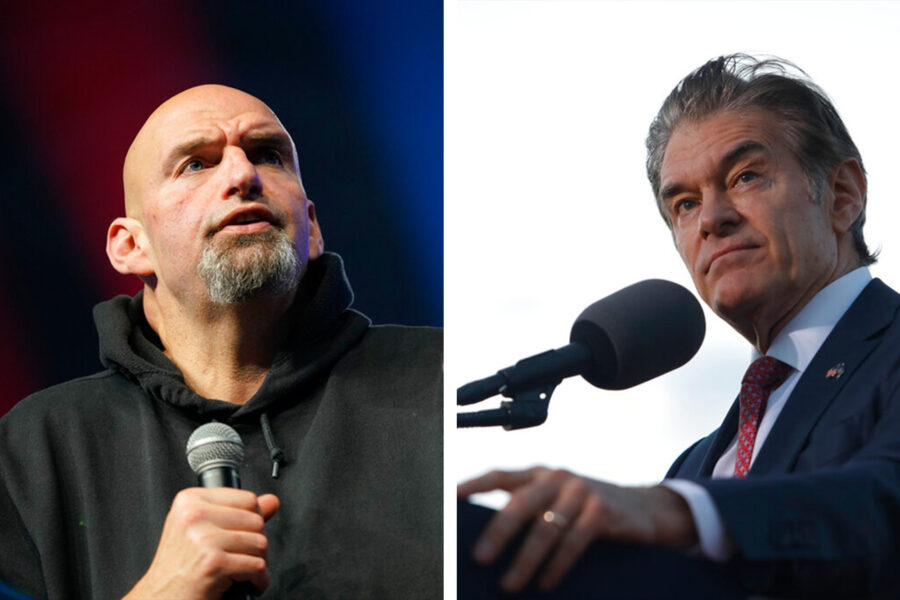 PHILADELPHIA — After more than $260 million in ad spending and visits from two former presidents this weekend, the Pennsylvania Senate matchup between John Fetterman and Mehmet Oz could come down to Bucks County, where the two candidates held dueling events miles from one another Sunday.

The convergence in the Philadelphia suburbs spotlighted a key midterm battleground as Democrats look to keep their narrow congressional majorities. Pennsylvania likely remains the party’s best pickup Senate opportunity but the race has narrowed substantially in the final weeks.

Bucks County, which stretches along the Delaware River north of Philadelphia and has a population of roughly 650,000, represents the swingiest of the Philadelphia suburbs. Former President Donald Trump came within 2,700 votes of winning the county in 2016 en route to a statewide victory. Four years later, President Joe Biden carried it by more than 17,000 votes.

The county has thousands of potential ticket-splitters, a group Oz urgently needs on Election Day. Republican gubernatorial nominee Doug Mastriano, who has struggled to fundraise and largely been abandoned by national Republicans over far-right ties, is poised to lose to Shapiro.

The celebrity doctor-turned GOP candidate was joined on Sunday by two politicians skilled at winning over ticket-splitters: Fitzpatrick, who represents Bucks County and part of neighboring Montgomery County and won reelection two years ago despite Biden also winning his district by 6 points; and Sen. Susan Collins (R-Maine), who handily won reelection in 2020.

The suburban events on an otherwise quiet Sunday in Philadelphia — the undefeated Eagles played on Thursday this week and the Phillies’ World Series run ended Saturday night — came after a very busy day on the campaign trail Saturday: Fetterman swung through Pittsburgh and Philadelphia with former President Barack Obama, with Biden also joining them for the latter stop, while Oz rallied alongside Trump in the western Pennsylvania city of Latrobe that night.

Campaigning alongside Collins and Fitzpatrick at a roundtable with business owners in Bucks County, Oz’s focus was not on the former president, however.

“I want to bring balance to Washington,” he said. “John Fetterman takes the extreme position over and over.”

The campaign event with Collins a day after the Trump rally was notable in part because the Maine senator has kept her distance from the former president. Collins did not publicly support Trump’s 2020 presidential campaign. She opposed him in 2016 and voted to convict him at his second impeachment trial.

Asked by a reporter afterward about the contrast between Oz’s two events, Collins disagreed with the notion that it was “mixed messaging” and said it shows that Oz can work with people who have different viewpoints.

“And that’s what we need in Washington,” she said.

Public polling in the Senate contest — one of the nation’s most competitive and closely watched — had been narrowing for months following a surge in Republican advertising on the air waves focused on inflation and crime. Republicans hoped to gain momentum after Fetterman’s halting performance in the campaign’s single debate on Oct. 25 as he dealt with the aftermath of a stroke. The race has remained tight since then, making the impact of the debate unclear.

Senate Majority PAC cut a last-minute ad this week highlighting Oprah Winfrey’s backing of Fetterman, an endorsement his camp had courted after Oz rose to fame in part by being on her show.

But remaining advertising on the air from both Republicans and Democrats largely hits on the same major messaging themes that have been present all cycle. Oz and Republicans have slammed Fetterman on the issue of crime, his record on the state board of pardons and his past support for the decriminalization of certain drugs, while looking to tie him to an unpopular Biden.

Democrats have hit Oz on the issue of abortion, including highlighting a debate clip of him saying “local political leaders” should have a say in abortion decisions. And they’ve tagged him as a wealthy, out-of-touch New Jerseyan.

Fetterman echoed those lines of messaging at Sunday’s rally in Newtown, repeating a line he has commonly used on the campaign trail that Oz is running to “use” Pennsylvania and that the state’s Senate seat “shouldn’t be for sale.”

More than 1 million Pennsylvania voters have already voted, with Democrats accounting for roughly 70 percent of those taking advantage of mail-in voting. But Election Day voting is still likely to make a more substantial impact in the state, where more than 5 million ballots were cast during the last midterm election.

Cristina Tzintzún Ramirez, the president of NextGen America, a liberal organization focused on youth voter turnout that organized the Philadelphia rally, noted the potential of young voters to swing the races, particularly with abortion rights as a motivating factor.

“This election is going to probably come down to just several thousand votes,” she said. “And we want to make sure that young people are able to tip the scales.”