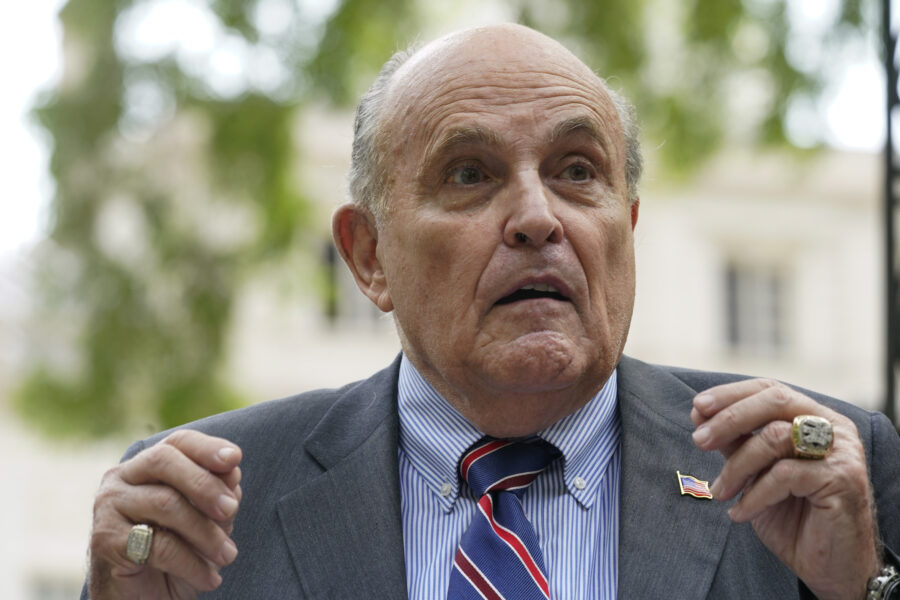 A federal judge has rejected Rudy Giuliani’s effort to dismiss a lawsuit brought by two Georgia election workers who he falsely accused of election fraud — stoking a furor that led to threats and harassment against both women.

U.S. District Court Chief Judge Beryl Howell ruled in a 27-page opinion that the case brought by both the mother-daughter duo — Ruby Freeman and Shaye Moss — was enough to justify advancing their lawsuit against Giuliani and presented “ample circumstantial evidence of a civil conspiracy between Giuliani and members of the Trump Campaign.”

Moss and Freeman were repeatedly accused by Donald Trump, Giuliani and their allies of election fraud, citing surveillance video inside an Atlanta vote tabulation center that they claimed showed the women moving suitcases full of illegal ballots. But the allegations were repeatedly and conclusively debunked by Georgia and federal investigators, who found the women were performing routine election-related functions that were not indicative of fraud at all.

Freeman and Moss filed the lawsuit on Dec. 23, 2021, accusing Giuliani and other defendants of defamation, intentional infliction of emotional distress and civil conspiracy. They amended the suitin May 2021 to focus only on Giuliani, seeking unspecified monetary damages.

Howell found that the claims against Moss and Freeman were part of a sweeping “strategic plan” spearheaded by Giuliani that contributed to widespread distrust in the outcome of the 2020 election.

Giuliani and Trump continued to propagate the false claims about Moss and Freeman, despite the repeated debunking. Trump raised them — and mentioned Freeman by name — during a Jan. 4, 2021 phone call with Secretary of State Brad Raffensperger, in which he urged Georgia officials to “find” enough votes to reverse his defeat in the state.

Howell noted that Raffensperger replied to Trump during the call, saying, “I think it’s extremely unfortunate that Rudy Giuliani or his people, they sliced and diced that video and took it out of context.”

Howell’s ruling allows Freeman and Moss’ lawsuit against Giuliani to continue to the “discovery” phase, in which Moss and Freeman can demand additional evidence to support their claims.

It’s the latest development in the legal efforts to unravel and assess the damage wrought by Trump and his allies’ for propagating false claims of election fraud. It’s also a notable ruling from Howell, who as chief judge presides over the grand jury investigating efforts by Trump and his allies to subvert the 2020 election.

For Freeman and Moss — who provided emotional public testimony the Jan. 6 select committee in June — the consequences were devastating. They were repeatedly accosted and harassed online. Freeman fled her home at the FBI’s recommendation ahead of Jan. 6, 2021.

Howell noted that Giuliani oversaw the creation and implementation of the “strategic plan” to sow doubt about the election results and encourage states to override the results to certify Trump as the winner. Included in that plan was a specific reference to Freeman that falsely suggested she had been arrested in connection with the fraud allegations.

“None of Giuliani’s arguments withstand scrutiny,” she wrote.

Her most notable finding related to Giuliani’s coordination with the Trump campaign to promote the attacks on Moss and Freeman. She said the two women had made a “plausible” claim that a civil conspiracy had occurred.

“A reasonable jury could accordingly infer that Giuliani, Trump, and the ‘[k]ey [t]eam [m]embers” listed in the Strategic Plan, created a plan to sow doubt in the outcome of the 2020 election by launching a misinformation campaign, which included accusing Freeman, Moss, and others of participating in schemes of electoral fraud, and injuring plaintiffs in the process.”