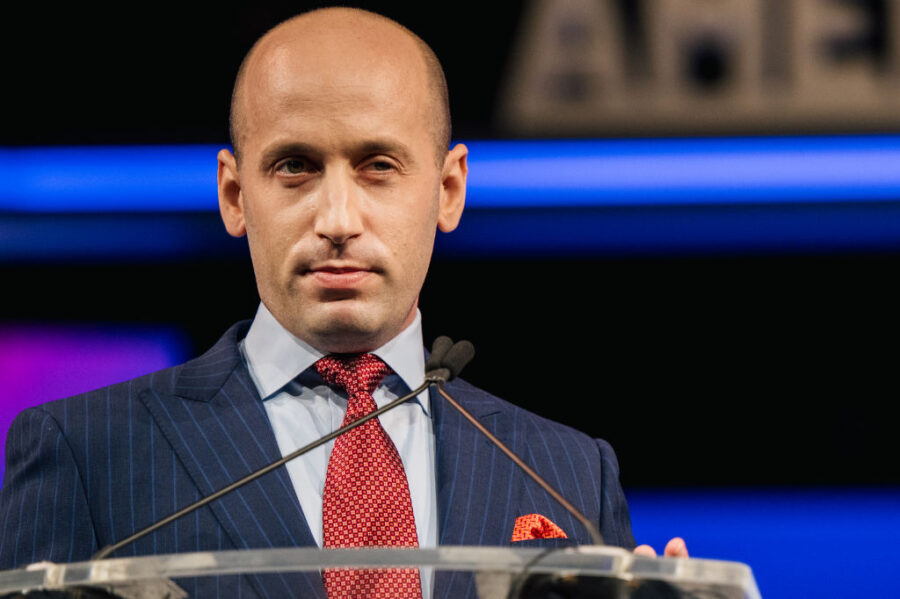 A group launched by longtime Donald Trump aide Stephen Miller has been quietly running radio ads warning white voters that the Biden administration is pursuing a host of policies designed to hurt them because of their race.

A recording of the ad, obtained by POLITICO, represents one of the most openly race-based spots of the cycle, amplifying tropes that have historically been used to generate backlash to minority groups.

A media contact for America First Legal did not immediately respond to questions about the scope of the ad buy or the content of the ad. The person who shared the ad with POLITICO said it was airing as part of a buy in Georgia, where a high-profile Senate and gubernatorial campaign is being waged. The spot, the person said, was running in the Augusta, Savannah, Albany, Columbus and Macon markets, as well as in Tallahassee, Fla., just south of the Georgia border.

The White House did not respond to a request for comment.

The claim that Harris said non-white citizens should be prioritized for disaster relief has been mischaracterized, according to fact checks. Another fact check found the comment from Biden about Covid relief ignored the entirety of his statement, as he was referring to how minority-owned businesses have been disproportionately impacted by the economic crisis.

Earlier this year, America First Legal filed a lawsuit in the state of New York against a Department of Health guideline for Covid-19 treatment that stated “Non-white race or Hispanic/Latino ethnicity should be considered a risk factor, as longstanding systemic health and social inequities have contributed to an increased risk of severe illness and death from COVID-19.” They also filed FOIA lawsuits requesting federal agency plans to comply with a Biden order to advance racial justice.

Citing the same Biden administration order, the group also has sent political mailers that state: “Joe Biden and left-wing officials are engaged in widespread racial discrimination against white and Asian Americans … even though it’s against the law.”

Miller has a long history of advocating for hard-line immigration and social-conservative policies. As a young Senate aide, he would cite white nationalist websites in his emails with conservative-leaning outlets. As a top policy adviser for Trump, Miller was one of the most influential advocates for stricter immigration policies, including separating children from parents at the southern border and a restriction on travel from some Muslim-majority countries.

His launch of American First Legal has provided a vehicle to continue to push that worldview. The group, which was formed as a “conservative version of the American Civil Liberties Union,” has filed dozens of FOIA lawsuits requesting government records on critical race theory in public schools, online censorship and immigration policies. During the Biden years, the group has repeatedly charged the administration with hosting an anti-white agenda. Among other moves, America First Legal filed a class-action lawsuit challenging the president’s Covid-relief bill’s program to provide aid to “socially disadvantaged farmers and ranchers.”

In the press release announcing the suit, American First Legal cited Martin Luther King Jr., saying farmers looking for assistance “should not be judged by the color of their skin, but by the content of their character.”