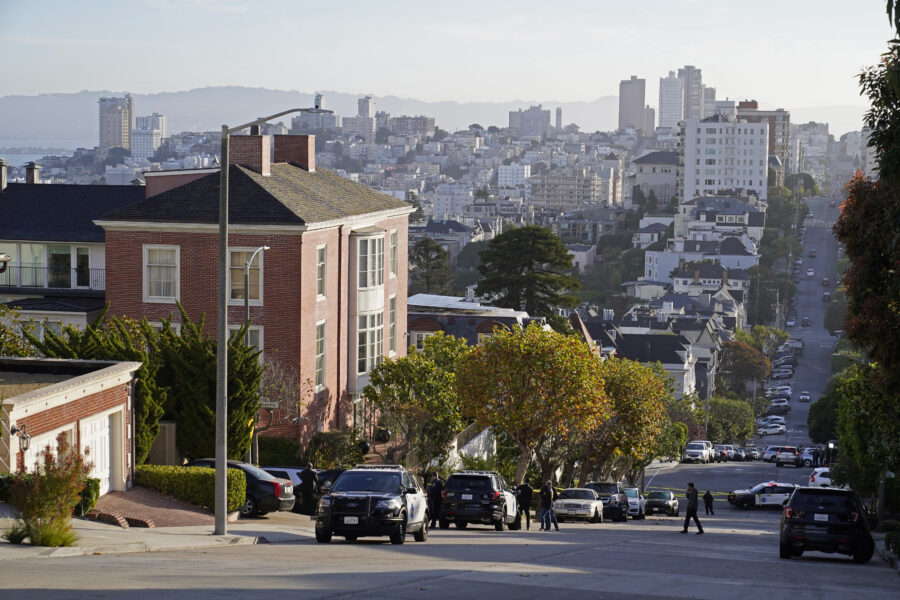 The violent break-in at the home of Speaker Nancy Pelosi, which left her husband Paul hospitalized, has sparked a string of questions about the motive behind the attack and protection needs for lawmakers and their family members.

Though San Francisco Police Chief William Scott described the attack as “intentional” and “not a random act,” law enforcement hasn’t yet detailed a motive for the alleged assailant or signaled if they’ll provide new information about the assault Saturday.

The alleged assailant, 42-year-old David DePape, who faces charges that include homicide and elder abuse, is expected to be arraigned in court on Tuesday, with Brooke Jenkins, the San Francisco District Attorney, saying she will bring multiple felony charges on Monday.

In a letter to House members released Saturday evening, Pelosi wrote: “Yesterday morning, a violent man broke into our family home, demanded to confront me and brutally attacked my husband Paul. Our children, our grandchildren and I are heartbroken and traumatized by the life-threatening attack on our Pop. We are grateful for the quick response of law enforcement and emergency services, and for the life-saving medical care he is receiving.”

News of the assault rocked Washington, D.C., where some lawmakers viewed it as a culmination of their growing concerns during the last two years as they’ve faced increased security threats. Members of Congress faced more than 9,625 threats and concerning statements reported in 2021, according to figures from the Capitol Police.

Capitol Police Chief Tom Manger sent a memo to House offices on Saturday calling the attack “a somber reminder of the threats elected officials and families face in 2022” and outlining existing security resources that lawmakers have, including residential security assessments and law enforcement coordination.

“Across the country, the USCP Threat Assessment Section is working around the clock to stop thousands of potential threats in their tracks,” he added.

DePape appeared to have embraced conspiracy theories and falsehoods including about the outcome of the 2020 election, the coronavirus vaccine and other political conspiracies, according to his social media and online posts.

Rep. David Price (D-N.C.) described the attack as being carried out by “a conspiracy theorist out to kill his spouse, Speaker Nancy Pelosi.” DePape called out “where’s Nancy?” during the invasion, drawing comparisons to the Jan. 6 attack on the Capitol when rioters searched for the speaker.

“Evidence now points to an unhinged individual inspired by years of demonization of the Speaker. This is what happens when responsible leaders tolerate the intolerable for political gain,” he added, referring to consistent political attacks levied against Pelosi by Republicans.

Vice President Kamala Harris, campaigning in Baltimore on Saturday, linked the attack to political rhetoric that she said is “promulgating hate.”

“Something has been happening on our country where powerful people, so-called leaders, have been using the bully pulpit that they were given by the people in a way that is about the preservation of their personal power and is being used to divide our country,” Harris said.

Other Democrats were more direct in pointing the finger at their fellow members of Congress for not pushing back forcefully enough in recent years against the rise in threats and political violence.

“Last year, a GOP Congressman shared a depiction of himself killing me. … Yesterday, a man sharing that member’s rhetoric tried to assassinate the Speaker and her spouse,” Rep. Alexandria Ocasio-Cortez said Saturday. Then, referring to Minority Leader Kevin McCarthy (R-Calif.), she wrote: “What has @GOPLeader said? Nothing. This is who he is.”

A McCarthy spokesperson said on Friday that the minority leader had “reached out to the Speaker to check in on Paul and said he’s praying for a full recovery and is thankful they caught the assailant.”

Pelosi wasn’t at home during the attack, which police said the intruder accessed through a back door. Instead, Paul Pelosi was able to dial 911 himself after telling the intruder he had to go use the bathroom and calling from there, where his phone had been charging, according to a person familiar with the situation.

Congress has doled out money to help fortify the Capitol complex in the wake of the Jan. 6 attack. And, in response to pressure from lawmakers, members were informed earlier this year that the House sergeant-at-arms would cover up to $10,000 for security equipment at their homes.

But that has hardly squashed concerns among lawmakers, with one predicting that Capitol Police will review security protections for the family members of congressional leaders in the wake of Friday’s assault. Asked about increased security for Pelosi’s house, the Capitol Police said that “for safety reasons, the USCP does not discuss potential security measures.”

Dozens of Republicans condemned the attack and wished Paul Pelosi a quick recovery, after he was hospitalized and underwent surgery to repair a skull fracture and “serious injuries to his right arm and hands,” according to Pelosi spokesperson Drew Hammill.

“Disgusted to hear about the horrific assault on Speaker Pelosi’s husband Paul. Grateful for law enforcement’s actions to respond,” tweeted House GOP Whip Steve Scalise (R-La.), who was the victim of a shooting at a congressional baseball practice in 2017. He added that: “Let’s be clear: Violence has no place in this country.”

Nicholas Wu contributed to this report.