The violent home invasion at Speaker Nancy Pelosi‘s residence Friday morning — which led to an attack that left her husband Paul hospitalized — is rattling Washington at a time when fears of political violence were already spiking.

The break-in is a dramatic escalation of the kind of aggressive threats that many lawmakers in both parties have seen in recent years, particularly since last year’s brutal Capitol siege. For some in the Hill community, the revelation that the perpetrator called out “where’s Nancy?” during the invasion eerily echoed the chants of pro-Trump Jan. 6 rioters, who stormed the Capitol and searched the halls for the speaker in a bid to stop the certification of President Joe Biden’s victory.

Pelosi, who was away from her San Francisco home at the time of the attack, has long warned of rising violent rhetoric and made security for Congress’ members and staff a higher priority since the riot — which included the pilfering of her own office.

Law enforcement officials are still investigating how the alleged assailant, identified by police as 42-year-old David DePape, was able to access the speaker’s home and have not yet assessed a motive.

Paul Pelosi was able to dial 911 himself after telling the intruder he had to go use the bathroom and then calling from there, where his phone had been charging, according to a person familiar with the situation. He was hospitalized after the attack at Zuckerberg San Francisco General Hospital, where he successfully underwent surgery to repair a skull fracture and “serious injuries to right arm and hands,” Pelosi spokesperson Drew Hammill said in a statement Friday evening.

The speaker’s husband is expected to make a full recovery.

“The Speaker and her family are thankful for the outpouring of support and prayers from friends, constituents and people around the country,” Hammill added. “The Pelosi family is immensely grateful to Mr. Pelosi’s entire medical team and the law enforcement officers who responded to the assault. The family appreciates respect for their privacy during this time.”

The incident is renewing a fierce debate in Washington and beyond about how to protect members of Congress and their families.

“Everyone is shaken. It’s absolutely chilling,” said Pennsylvania Rep. Madeleine Dean, one of many Democrats who reached out to the speaker’s team upon hearing the news. “You can be against me for what I stand for. But the vitriol to the point of spurring violence is so unacceptable.”

Dean, who’s received violent threats against her and her family, now carries a bulletproof vest in her car after her involvement in Trump’s first impeachment trial. “Who thought I was going to walk into service and need one of those?” she asked.

Congress has doled out millions of dollars since Jan. 6 for protection of lawmakers and their families, including expanding access to home security cameras, body armor and private security guards, on top of a separate effort to protect Supreme Court justices’ families. But several lawmakers, predominantly Democrats, have said there’s more to be done. Earlier this year, U.S. Capitol Police reported about 9,600 threats against lawmakers in 2021 — a steady increase from previous years.

The invasion at the Pelosi residence swiftly drew condemnation from top Republicans, including House Minority Whip Steve Scalise (R-La.) — himself a survivor of a politically motivated attack, who said he was “disgusted” by the assault on the speaker’s husband. Scalise personally phoned Pelosi after hearing of the incident, and House Minority Leader Kevin McCarthy also reached out.

The swiftness of public GOP support for the speaker, ranging from McCarthy to Senate Minority Leader Mitch McConnell to Sen. Ted Cruz (R-Texas), struck a rare note of bipartisan collegiality at the end of a midterm election dominated by bitter sniping across the aisle. It was especially notable as Pelosi remains a favorite political villain for GOP campaigns. 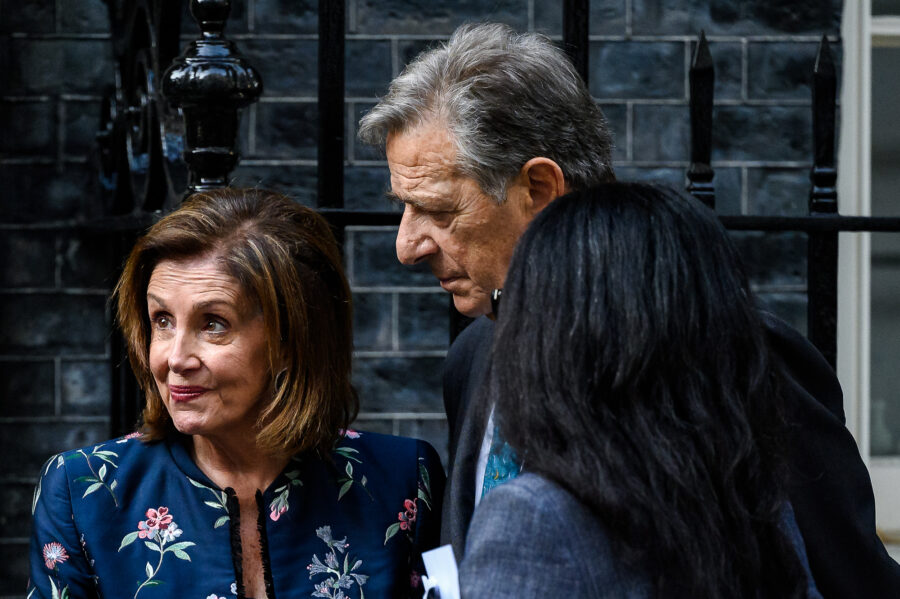 On the same day as the Pelosi attack, a Pennsylvania man pleaded guilty to threatening to kill Rep. Eric Swalwell (D-Calif.). the assailant had repeatedly dialed the congressman’s office to say he “had a lot of AR-15s” and wanted to shoot the member. And just months earlier, in July, a man was charged with felony stalking after making threats outside of the home of Rep. Pramila Jayapal (D-Wash.) while carrying a holstered firearm.

And it’s not just members of Congress: In June, a man with a gun and knife was arrested outside of the home of Supreme Court Justice Brett Kavanaugh after making threats against him.

The Capitol Police, which are part of the investigation along with the FBI and San Francisco police, have obtained video from the attack showing the alleged assailant, DePape, breaking into Pelosi’s house with a hammer, according to sources familiar with the situation. DePape entered the Pelosi house early Friday morning while searching for the speaker and shouting “where is Nancy, where is Nancy?”, according to a source briefed on the attack.

Later Friday morning, the block of stately homes where Pelosi lives was cordoned off with police tape. Several police vehicles and FBI agents were visible outside the residence.

In a brief press conference Friday, San Francisco Police Chief William Scott said that police officers were dispatched to the Pelosi residence at about 2:30 a.m. for a “priority well-being check,” and arrived on the scene to find Paul Pelosi and DePape holding a hammer.

“The suspect pulled the hammer away from Mr. Pelosi and violently assaulted him with it,” Scott said. “Our officers immediately tackled the suspect, disarmed him, took him into custody, requested emergency backup and rendered medical aid.”

DePape, the suspect, was also transported to a local hospital for treatment, Scott said. He will be booked at San Francisco County jail on charges of attempted homicide, assault with a deadly weapon, elder abuse, burglary and several additional felonies.

Support for the speaker and Paul Pelosi streamed in from both sides of the aisle. California Gov. Gavin Newsom said in a statement Friday the assault on Paul Pelosi is “another example of the dangerous consequences of the divisive and hateful rhetoric that is putting lives at risk and undermining our very democracy and Democratic institutions.”

Biden, speaking at a Friday evening fundraiser in Pennsylvania, called the attack “despicable” and implored Americans to “stand up clearly and unambiguously” against political violence.

White House press secretary Karine Jean-Pierre said in a earlier statement that Biden called Nancy Pelosi Friday morning to “express his support after this horrible attack” and to condemn the violence. She added that the president is praying for the Pelosi family and that he’s “very glad” a full recovery is expected.

Many lawmakers, including McConnell and Iowa Sen. Chuck Grassley, took to Twitter Friday morning to condemn the attack and express support for the speaker and her husband.

House Republican Caucus Chair Elise Stefanik (R-N.Y.) said of the alleged attacker in a statement “this criminal should be prosecuted to the fullest extent of the law.”

“Horrified and disgusted by the reports that Paul Pelosi was assaulted in his and Speaker Pelosi’s home last night,”McConnell said in a tweet. “Grateful to hear that Paul is on track to make a full recovery and that law enforcement including our stellar Capitol Police are on the case.”

However, not every Republican offered unabashed support. Virginia Gov. Glenn Youngkin, while campaigning with GOP congressional candidate Yesli Vega, told an audience of Paul and Nancy Pelosi: “There’s no room for violence anywhere, but we’re going to send her back to be with him in California.”

And not every Democrat was satisfied with the warm words after Friday’s traumatic attack.

“We know what has fueled this: It is years of vitriol and disinformation,” Dean said, citing GOP leaders who have allowed politically motivated lies, including those about the validity of elections, to become mainstream. “What we have sown is what we are reaping.”

Jeremy B. White and Olivia Beavers contributed to this report.