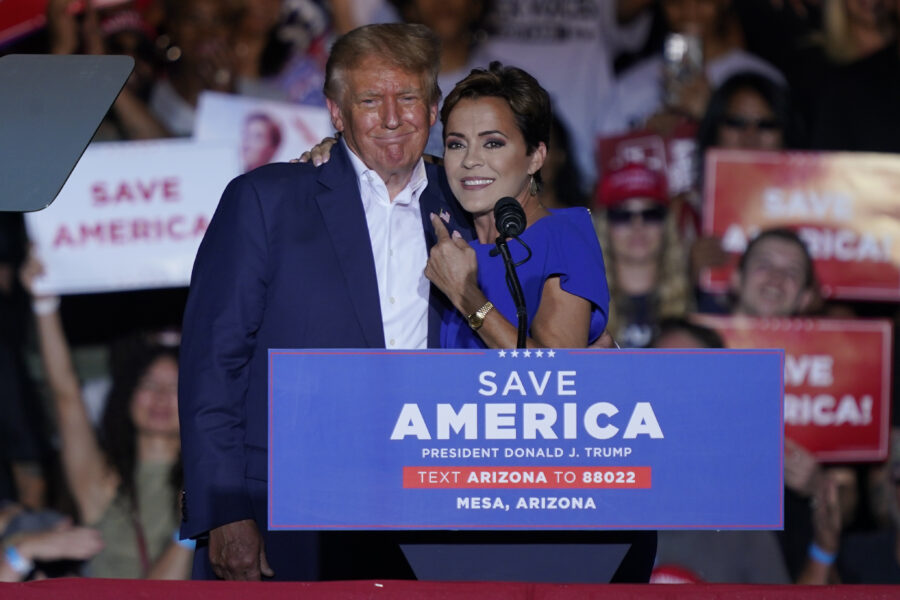 Arizona Republican Kari Lake hasn’t yet won her campaign for governor. But she is already offering her help to other Republican candidates across the country.

Lake is releasing video advertisements bolstering gubernatorial hopefuls Tudor Dixon of Michigan and Doug Mastriano of Pennsylvania — an unusual move for a first-time candidate still in the throes of a competitive race, but one that starkly illustrates Lake’s meteoric rise in the national party.

“Hey Michigan, it’s Kari Lake. I’m running for governor of Arizona, but I wanted to reach out to you and talk to you about your governor’s race in your state,” Lake says in the video backing Dixon.

In the recording, Lake goes after Michigan’s Democratic governor, Gretchen Whitmer, and says Dixon will be “an incredible leader” for the state. In another video, Lake implores Pennsylvania voters to support Mastriano, describing him as a like-minded figure who has her “complete and total endorsement” — a phrase former President Donald Trump frequently uses when he declares his support for candidates.

Lake, a longtime former TV news anchor, has emerged as a conservative hero ahead of this election, thanks largely to her outspoken support of Trump, her strident opposition to vaccine and mask mandates and, perhaps most of all, her combative approach to the news media.

She has become a favorite on pro-Trump platforms like Fox News and Newsmax, is being peppered with questions about her interest in being on the GOP’s 2024 ticket and is receiving extensive praise from party leaders. House Minority Leader Kevin McCarthy recently reached out to Lake to praise her communications skills and to say that she had been helping the party’s down-ballot candidates, according to two people familiar with their discussion.

The former local news anchorwoman is one of the few national Republicans who’ve been willing to help Mastriano, a far-right candidate who was present during the Jan. 6 Capitol siege. The Republican Governors Association has yet to air any TV advertisements supporting Mastriano, nor has MAGA, Inc., the primary super PAC aligned with Trump. Both groups are bolstering Dixon.

Lake has been in touch with Dixon and Mastriano and offered to record the videos, according to a person familiar with the discussions.

Those involved in the Arizona campaign say Lake remains focused on winning her own race against Democratic Secretary of State Katie Hobbs, which top Republicans say remains competitive. Democrats have far outspent Lake on the TV airwaves, and she has been getting help from groups like the RGA and the pro-Trump super PAC.

Republican strategists say the tour is partly aimed at pulling up Masters: While polls show Masters in a competitive race against Democratic Sen. Mark Kelly, he is garnering less support than Lake.