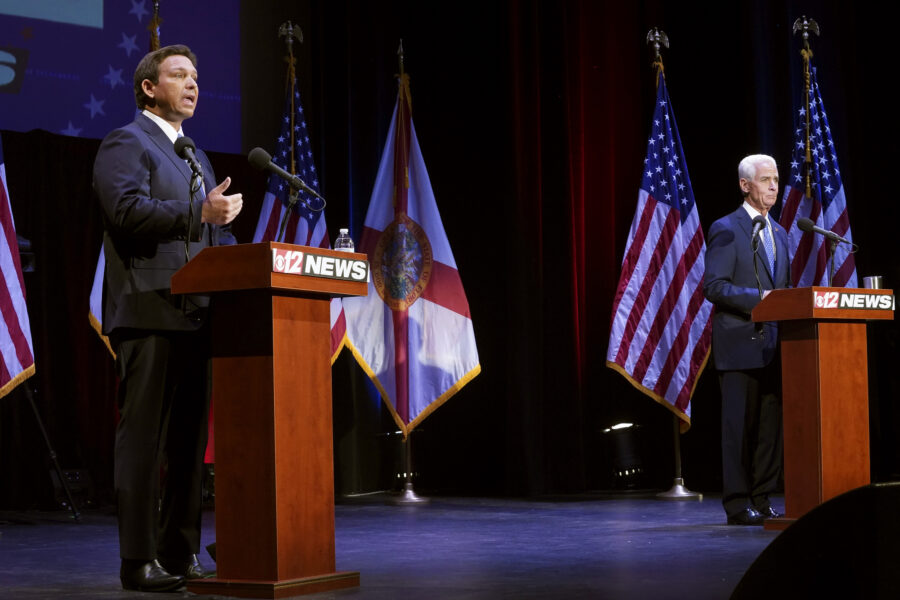 JACKSONVILLE, Fla. — Florida Democrats are bracing for a very bad night on Nov. 8.

Less than two weeks before the election, Democrats are signaling that key races are slipping away from them. They point to ominous signs and missed opportunities, including the party’s message on abortion rights and gun control that isn’t resonating and a lack of coordination between the campaigns of Rep. Val Demings, who is vying to unseat Sen. Marco Rubio, and Charlie Crist, who is challenging Gov. Ron DeSantis.

Most worrisome for Democrats, national organizations and donors have all but abandoned their candidates — setting off fears that Florida is no longer viewed as competitive.

That would have dire implications for the next presidential election.

“If Democrats follow this building national narrative and decide not to compete in Florida in 2024, it will be one of the most short-sighted decisions of the last 30 years,” said Greg Goddard, a veteran Florida Democratic fundraiser. “Where do we think the pathway to winning a future presidential election lies?”

Interviews with more than a dozen Democratic operatives, consultants and elected officials reflect that there’s little optimism ahead of the midterms and longstanding issues that show the once-perennial swing state may be lost to them. Consider:

Florida has trended Republican in recent years, with former President Donald Trump winning the state in 2016 by a little over 1 percent and again in 2020 by an even wider 3-point margin. Many Democrats began to write off the state, even as the party maintained a big voter registration advantage. Now it’s lost that edge — there are now nearly 300,000 more registered Republicans statewide.

It all seems to spell doom for Democrats. Some think the party is just waving a white flag.

State Sen. Jason Pizzo, a Democrat who represents part of South Florida, noted that President Joe Biden has visited the state only twice since becoming president — both during times of crisis instead of specific campaign events. Biden is scheduled to hold a fundraiser and get out the vote rally with Crist in South Florida on Nov. 1, just days before the election. Demings is scheduled to join Biden at the rally.

“What have Democrats done? Not enough,” Pizzo said.

At a recent event in Jacksonville, a few dozen of the most fervent Florida Democratic activists gathered at a union hall to hear Democratic National Committee Chair Jaime Harrison rally supporters ahead of the midterms..

Calling the Nov. 8 elections the most important “of our lifetime,” Harrison tried to summon enthusiasm for the slate of Democratic candidates. But there was a sense of resignation from the crowd of activists who have seen Democrats lose almost every major Florida election over the past two decades.

The event was supposed to send a charge through the party’s grassroots but instead exposed the lack of coordination among candidates and enthusiasm gap haunting Democrats. Demings wasn’t there, nor were Democratic candidates for state attorney general or agriculture commissioner. Only Crist, the former Florida Republican governor turned Democrat, who is challenging Gov. Ron DeSantis, attended.

“You had the Democratic gubernatorial candidate on his [get out the vote] bus tour in arguably one of the strongest Democratic performing swing counties and best-organized ground games, and you had 50 or 60 people show up?” said Matthew Van Name, a longtime Democratic consultant who attended the event. “2022 is one of the most uncomfortable and segmented cycles I’ve seen.”

The sinking feeling among Democrats comes against the backdrop of DeSantis’ rise. He has become a leading national figure, a likely 2024 GOP presidential candidate and fundraising juggernaut who’s pulled in more than $150 million for his campaign operation during the 2022 cycle and millions more for the Republican Party of Florida.

That cash advantage allowed DeSantis to spend more than $50 million on TV ads, dwarfing what Crist and Democrats could get on the airwaves. Crist, for instance, spent a total of $5.5 million on attack ads, with $1.2 million of that used against Nikki Fried, his Democratic primary opponent.

DeSantis fueled his rise in part by charting his own course on Covid-19, eschewing lockdowns and vaccine mandates. He built a Trumplike connection with conservative base voters that has most political observers asking not if he will win reelection, but by how much. He might even dominate Miami-Dade County, which he lost by 20 points in 2018 to Democratic nominee Andrew Gillum.

“I think Ron DeSantis will win Miami-Dade County,” said Evan Ross, a longtime South Florida-based Democratic consultant. “Democratic voters are not at all excited or motivated by Charlie’s campaign. Right now, I think it will be close, but I think DeSantis beats Crist here.”

Ross recently conducted polling in Miami-Dade County that found roughly 15 percent of Democrats saying they would not vote for Crist, while 5 percent of Republicans said they wouldn’t vote for DeSantis. In the county, DeSantis’ approval rating with Republicans is plus-89 percent, while Crist’s approval rating is just plus-49 with Democrats. Democrats still lead Republicans in overall voter registration numbers in Miami-Dade, more than 575,000 to 435,000-plus, though that gap is decreasing.

“The only thing that might give Charlie Crist a chance of becoming governor would be DeSantis aggressively campaigning for him over the next two weeks,” Ross said. “Translation: It’s over. And it’s going to be ugly.”

It’s not the only bad sign for Democrats in Miami-Dade County, where nearly 60 percent of voters are Hispanic.

An internal poll released earlier this month by Democrat Annette Taddeo had her beating her Republican opponent, Rep. María Elvira Salazar, by just 1 point in Miami-Dade County’s 27th Congressional District — but with DeSantis up on Crist by 6 points in that district. DeSantis lost the district in 2018 by nearly 8 points.

In the same race, seen as one of the only competitive congressional races left in Florida, Republicans hold an 818-vote advantage with nearly 55,000 votes already cast. Democrats typically win preelection day voting, which is a combination of mail ballots and in-person early voting, so the fact Republicans are winning is a bad sign for Taddeo and Democrats. Especially in a county that has long been one of the state’s biggest Democratic strongholds.

“What it means for Democrats is we need to reset how we define ourselves,” Ross said. “We can’t have candidates who attempt to walk the line on issues. You know, for the most part, where Ron DeSantis stands on every issue. Donald Trump did the same thing. We need to take strong positions.”

Some Democrats, however, are trying to retain some hope about the looming election.

“Conventional wisdom is that DeSantis and Rubio had this locked up, but it wasn’t long ago that conventional wisdom had Joe Biden dead in the Democratic primary and Trump losing to Hillary by double digits,” said Juan Penalosa, former executive director of the Florida Democratic Party. “Anyone who can say with certainty that they know the election results ahead of time is reading a crystal ball but not a poll. This is going to come down to turnout, and right now, with more than 800,000 votes cast, Democrats have the edge.”

Lauren Book, a Democratic legislative leader who is trying to stop Republicans from gaining a supermajority in the state Senate, added: “Just because a few polls say there’s a red wave should we give up? Absolutely not.”

Steve Schale, a veteran Democratic strategist who still runs a super PAC that supports Biden, was blunt: “I don’t see how we get to 50 percent” of the vote tally by the end of election night.

Schale pointed out how the party is now struggling with Hispanic and non-college educated white voters. Democrats in the past would try to rely on large margins in urban counties, such as Miami-Dade. If that doesn’t happen, there’s no realistic path to victory.

“For me, it’s a simple math question,” he said.