Republicans with an eye on the presidency are sending not-so-subtle signals about their plans for the 2024 cycle — and they’re not all waiting for Donald Trump to make up his mind.

Florida Gov. Ron DeSantis is building out a national donor network. Former Vice President Mike Pence is giving speeches about his vision for the GOP.

Then, of course, there’s Trump himself. The former president and his team are starting discussions about building a campaign apparatus, including tapping a 2024 campaign manager and other top positions, should he decide to run.

According to multiple people familiar with those discussions, one of the people most likely to have a lead role in an official operation is Republican consultant Chris LaCivita, who was recently brought on to the new Trump-backed Make America Great Again, Inc. super PAC.

Reached for comment, LaCivita said: “I don’t respond to rumors.”

Shadow campaigning more than two years out from a presidential election is not a new phenomenon. But the intensity with which it’s now taking place on the GOP side of the ledger is an indication that the presidential primary will begin in haste shortly after the midterms. It also suggests that some presidential aspirants and party bigwigs believe there is a brief window to try and define the contest before Trump himself jumps in.

“If you get in before Trump, then your announcement and campaign is about you. If you come in after you’ll be portrayed as seeing some kind of vulnerability in Trump and his reaction will be part of your roll out,” said Alex Conant, a Republican strategist who was a senior adviser on Sen. Marco Rubio’s (R-Fla.) presidential bid.

Trump has made no secret of his deliberations around a future campaign. He muses out loud about sharing his decision to run again “very soon.” He openly brags about his standing in polls among other star Republicans. He pays close attention to what those potential rivals are doing, and has continued regular meetings with his pollsters to discuss the midterms and Republican landscape.

Jabs are being thrown too. Recently Trump told DeSantis it was a “big mistake” to wade into the Colorado Senate race by endorsing fellow Republican Joe O’Dea, whom Trump recently trashed in a post on Truth Social.

An early indication of whether the 2024 cycle will be defined as Trump v. the field, or a more open contest, could come soon. The Republican Jewish Coalition is set to hold its annual meeting in Las Vegas in November and will draw a slate of potential hopefuls, including DeSantis, Pence, and former Secretary of State Mike Pompeo alongside major GOP donors, including Miriam Adelson. One name not currently among those listed by the group is Trump, although he spoke via video last year.

Few prognosticators believe that a candidate other than Trump will emerge with the Republican presidential nomination in 2024. But the current maneuvering by potential Trump challengers suggest that they see some political vulnerabilities related to the ongoing legal turmoil surrounding his challenge of the 2020 election, and an opening among Republicans looking for Trump alternatives.

Trump’s team has privately argued that the GOP base has and will rally to his side amid the various probes into his conduct. They also believe that Republican gains in the Senate and wins by Trump endorsed candidates will give the ex-president more momentum to run.

But if election night is lackluster in any way for the GOP, donors and alternatives to Trump say the dynamics will be far less certain.

“The president is going to have to make decisions based on how his candidates did and how he was involved in helping or not, and all this legal stuff is a time suck for him,” said Dave Carney, a GOP strategist whose clients include for Texas Gov. Greg Abbott. “I think he’d want to have a bunch of this stuff over with so he can make a clear eyed decision, and some will wait until he decides. Six months after the midterms will be a real gut check. If you’re not in after six months you’re not in.”

Although no formal announcements appear imminent, 2024 hopefuls are quietly hinting at their ambitions. Most teams consist of a few longtime aides, but several are privately talking to prominent strategists about potential operations, and are growing their donor networks.

For months, Trump has said he will be making a decision on his 2024 plans “in the not too distant future,” and told a crowd of rally-goers in Texas on Saturday night, “I will probably have to do it again.” He has also fired a warning shot at other potential candidates, including during a recent interview with Fox News Radio’s “Brian Kilmeade Show,” in which he said it would be “very disloyal” if any former administration officials ran against him.

Pompeo has said whether or not he runs isn’t dependent on what Trump does, and told CBS News he will likely make a decision at the beginning of 2023. But Pence, Christie, and Arkansas Gov. Asa Hutchinson have also said they will make a decision on running no matter what Trump decides to do. Last week, Pence was asked at Georgetown University if he would support a Trump candidacy and wryly replied, “Well, there might be somebody else I’d prefer more.”

In the meantime, potential GOP candidates for president are taking advantage of national attention on key midterm races. Pence is going on a bus tour in support of Georgia incumbent Gov. Brian Kemp (who Trump targeted in the primary). Cotton campaigned for controversial Georgia GOP Senate candidate Herschel Walker and is expected to appear in Pennsylvania for Senate candidate Mehmet Oz. 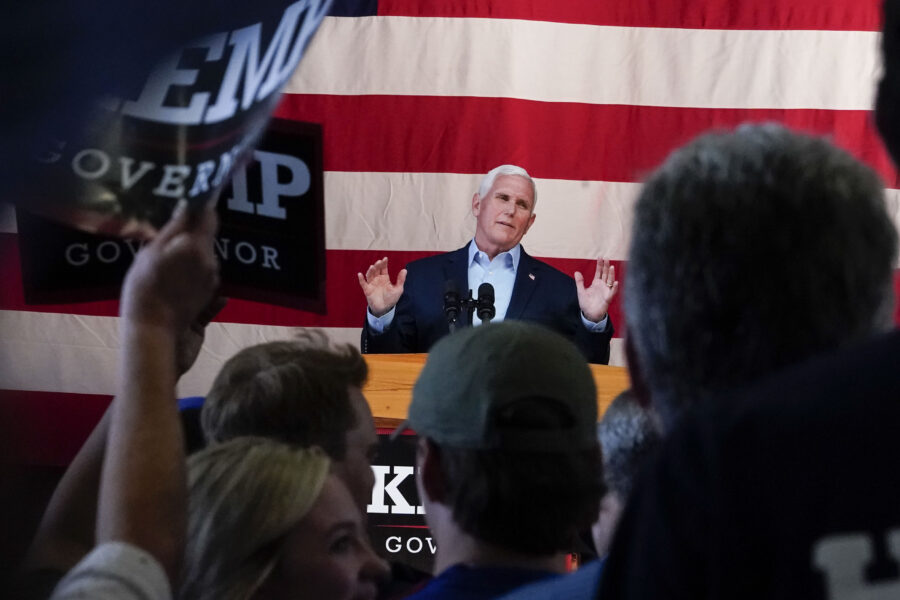 This week, Haley will be in Iowa for a bus tour with Gov. Kim Reynolds and Reps. Mariannette Miller-Meeks and Ashley Hinson, Pennsylvania for Oz and Lisa Scheller, and New Jersey for Tom Kean Jr. Her plans are being ironed out for events with Senate candidates Walker and Ron Johnson ahead of Election Day, according to an aide.

Trump, according to advisers, is expected to hold a few more rallies in the closing weeks although locations have not yet been announced. He will also be attending the LIV tournament at his golf resort in Miami.

The post-midterm election season is to feature several high profile GOP conferences that will spotlight an array of would-be candidates — and where buzz about the looming 2024 primary will be front-and-center. In addition to the RJC event, the Republican Governors Association is set to meet in Florida this November — a confab that is expected to draw prospective candidates. And Pence will be appearing at the American Legislative Exchange Council’s States & Nation Policy Summit at the end of November

In January, the Republican National Committee is set to hold its annual winter meeting, a gathering where the party is expected to decide who will serve as its chair for the 2024 election cycle.

But one of the surest indications that a potential candidate is likely to dip his or her toes into the presidential waters is if they are writing (and selling) a book.

Scott released a memoir in August and Haley released a book on female leadership earlier this month. Next month Cotton is releasing a book on military and political policy. Pompeo announced that he will be publishing a memoir to be released in early 2023. Pence is releasing his own memoir just one week after the midterm elections and as part of his book tour, will be speaking at the Reagan Library and the New York Times DealBook Summit in November, according to an aide.

Trump, too, is working on a book — on a yet to be announced subject — that will be published through Winning Team Publishing, run by his son Donald Trump Jr. and a top lieutenant, Sergio Gor.