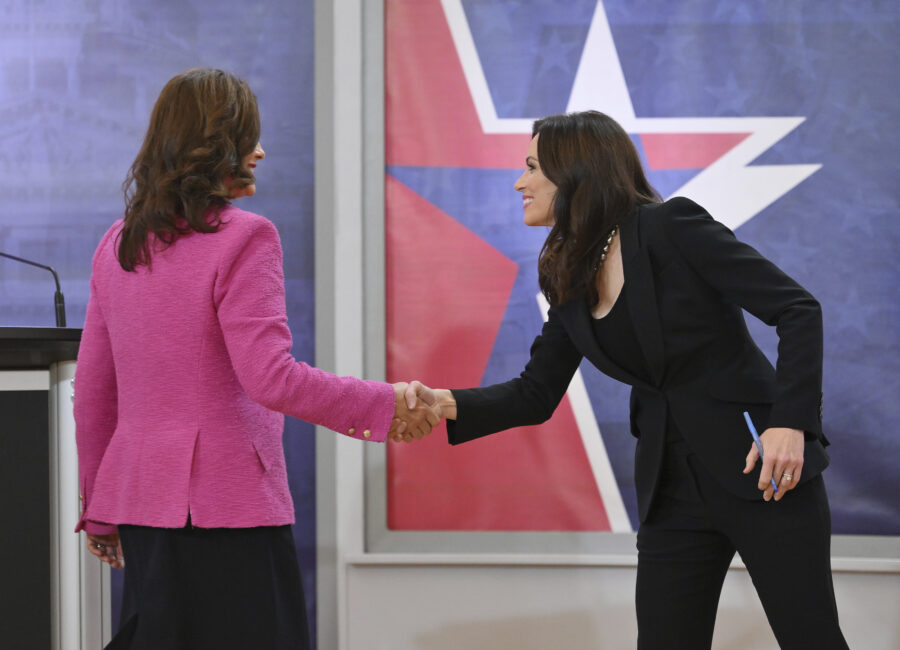 Candidates in some of the closest contests in the country met on stage just two weeks before Election Day, with early and mail voting already underway in many places.

The primetime clash was in the tightly divided Pennsylvania Senate race, where Democratic Lt. Gov. John Fetterman and Republican Mehmet Oz, the doctor and TV host, met for their first — and only — debate. But the candidates for Michigan governor — where Democratic Gov. Gretchen Whitmer is running for reelection against Republican Tudor Dixon — met as well, as did contenders for governor of New York and senator from Colorado.

The characters were different in every state, but each debate featured candidates clashing on the economy and inflation, along with access to abortion rights and American energy. Here are the big takeaways from Tuesday’s debates:

Fetterman’s health at center of only debate

Fetterman, who suffered a stroke in May, used live captioning as an accommodation in Tuesday’s debate. The introduction of the debate displayed the captioning system to viewers, noting that it was visible to both candidates.

“I might miss some words during this debate, mush two words together,” Fetterman said at the top of the debate, and he sometimes did just that during the proceedings.

Later in the debate, moderators pressed Fetterman to pledge to release his “full medical records,” following his campaign recently releasing a letter from his doctor saying he was recovering and fit to run for office. The Democrat declined to commit, instead saying: “My doctor believes I am fit to be serving.”

Oz’s campaign has suggested Fetterman is not healthy enough to serve as senator. He largely did not mention his opponent’s medical condition on stage, but he did appear to make a joke at Fetterman’s expense at one point, saying he “wasn’t clear enough for you to understand this” in a conversation about the cost of higher education.

During the debate, the moderators pushed Oz on abortion, with him saying it should be left up to the states. “I don’t want the federal government involved with that all,” Oz said. “I want women, doctors, local political leaders — letting the democracy that’s always allowed our nation to thrive to put the best ideas forward so states can decide for themselves.”

Oz also pledged to support former President Donald Trump should he run for the White House again in 2024, and he said he wasn’t particularly following the former president’s legal perils. In turn, Fetterman said he would back President Joe Biden should he run for reelection.

If Fetterman does hold off Oz, it would be a major boon for Democrats’ hopes of keeping their Senate majority. A win in Pennsylvania would flip a Republican seat, giving them more wiggle room as several Democratic incumbents attempt to see off tough reelection fights.

“The governor absolutely matters to this,” Whitmer said, criticizing Dixon for supporting a near-total ban on abortion. “The right to have reproductive choice is important for women of all ages, from all walks of life.”

Dixon attacked the ballot measure — and Whitmer — as extreme, saying “when Gov. Whitmer tells you this is going to be Roe, it is not even close to Roe. … It would be the most radical abortion law in the entire country.”

Much of the second half of the debate focused on the economy — including inflation, energy costs and various taxes — and education. Whitmer and Dixon clashed on how to protect schools from gun violence, with Dixon saying she would like to have armed security and one entry point for schools along with calling for an “office of safe schools” in the state.

But Whitmer pushed back, saying there was a need for stronger gun control measures and saying that Dixon’s proposals have failed elsewhere.

“There was a school shooting in Missouri yesterday, in a district that had exactly what she just described,” she said. “And people are dead.”

Hochul tried to stick with her record on tightening gun laws. “It’s not about governing by sound bytes. I’m governing by sound policy,” Hochul said. Those who commit crimes in New York still face consequences, Hochul added, after repeated prodding by Zeldin.

Polls last week showed Zeldin coming within striking distance of the incumbent governor, as he has focused his campaign on a message that Hochul has failed to address violent crime in New York City.

Hochul — who has spent much of the campaign painting Zeldin as an anti-abortion, pro-MAGA extremist — has recently tried to pivot to address some of New Yorkers’ concerns on crime.

Zeldin, for his part, said Tuesday he would accept the results of the governor’s election if he lost, but he also defended his vote in Congress against certifying the 2020 election.

New York has been reliably Democratic for two decades, last electing a Republican governor in 2002.

In contrast to the rest of Tuesday’s debate programming, Colorado’s Senate debate between Democratic Sen. Michael Bennet and Republican Joe O’Dea lacked major fireworks, with both candidates both trying to cast themselves as proponents of moderation.

“We need to come together. Put labels, partisanship, political titles aside and solve problems,” O’Dea, a businessman, said in his opening statement. Meanwhile, O’Dea labeled Bennet a “rubber stamp” for President Joe Biden.

Bennet pushed back on the characterization, talking up his bipartisan bona fides later on. “I have not contributed to the toxic atmosphere that’s there in the time I’ve been in the Senate,” he said, mentioning a rafting trip he took with Sen. Mitt Romney (R-Utah).

Both candidates expressed support for permitting reform pushed by Sen. Joe Manchin (D-W. Va.) earlier this year. But they nicked each other repeatedly on energy, with Bennett saying dryly at one point O’Dea was “so passionate about” fossil fuels.

Despite the measured pace of the two men’s exchanges, the stakes in Colorado’s race are as high as for any Senate seat.

O’Dea has trailed in polls, but campaign groups have poured millions into both sides in recent weeks, as Republicans hope he can pull off an upset.

The debate took place against an unusual political backdrop: Trump this week spoke out against O’Dea after the Republican said he would “openly campaign” against the former president. Trump also called Florida Gov. Ron DeSantis’ endorsement of the candidate “a big mistake.”

Bennet and O’Dea don’t get much of a reprieve: They are set to meet for another debate on Friday.