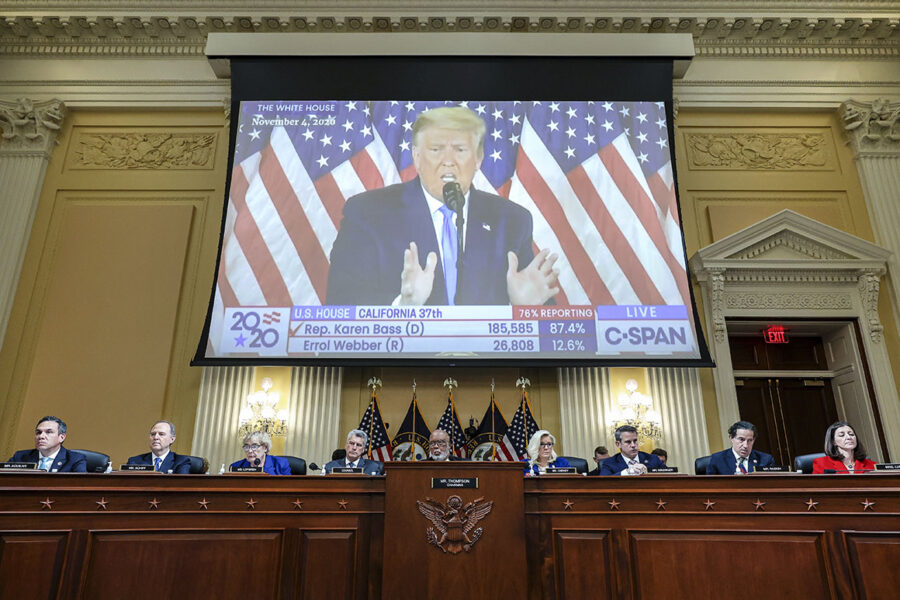 The Jan. 6 select committee subpoenaed former President Donald Trump on Friday, a historic — if largely symbolic — step that is unlikely to compel Trump’s testimony before the panel dissolves at the end of the year.

The panel’s chair, Rep. Bennie Thompson, issued the subpoena eight days after the panel unanimously authorized the Mississippi Democrat to demand the former president’s testimony. It’s just the second time in modern U.S. history that Congress has taken such a step.

The committee is demanding his testimony and documents related to evidence that it says proves Trump played a “central role” in attempting to subvert the 2020 election, triggered the violent mob attack on the Capitol that followed and exacerbated it while police attempted to regain control. The subpoena gives Trump until Nov. 4 to produce documents and sets Nov. 14 as a deposition date.

An attorney for the former president said they would review the subpoena.

“We understand that, once again, flouting norms and appropriate and customary process, the Committee has publicly released a copy of its subpoena,“ said David Warrington, a partner at the Dhillon Law Group, which Trump hired to engage with the select panel on the subpoena. “As with any similar matter, we will review and analyze it, and will respond as appropriate to this unprecedented action.“

The select panel has previously released copies of subpoenas during its contempt of Congress proceedings, and other copies of the subpoenas have come out during litigation with witnesses.

“The evidence demonstrates that you knew this activity was illegal and unconstitutional, Thompson and vice chair Rep. Liz Cheney (R-Wyo.) wrote in a letter accompanying the subpoena, “and also knew that your assertions of fraud were false.”

Investigators asked for all of Trump’s Jan. 6 communications records through the encrypted app Signal or other means, including contacts with members of Congress from mid-December 2020 until Jan. 6, 2021.

The subpoena demanded documents related to any plans to influence state and local legislators and officials to delay or change the certification of the presidential election or for alternate slates of electors pledged to Trump in states won by Biden. The efforts to appoint the alternate slates of electors have become a focus of a parallel investigation by the Justice Department.

Investigators singled out records related to members of Congress, particularly Rep. Scott Perry (R-Pa.), who’d become a part of both the select panel’s investigation and DOJ’s inquiry for his connections to Trump’s efforts to overturn the election. Perry had pushed for DOJ official Jeffrey Clark, who was seen as more sympathetic to investigations of election fraud, to be elevated within the department.

The committee is also looking for any evidence of potential obstruction of its own investigation, asking specifically for records of Trump’s contacts with witnesses, their attorneys and with a former deputy White House chief of staff, Tony Ornato, whose own testimony about Jan. 6 has been challenged by the panel. The committee also wants any records of Trump “directly or indirectly” paying for some witnesses’ legal fees and “finding, offering or discussing employment for any such witnesses.”

More than two dozen witnesses sued to block the select committee’s efforts to obtain testimony or phone records, and some of that litigation has lingered for nearly a year. Congress has never successfully enforced a subpoena against a former president, and the litigation around this could drag out the process.